Women’s Volleyball: Boykin lives above the net, despite no postseason 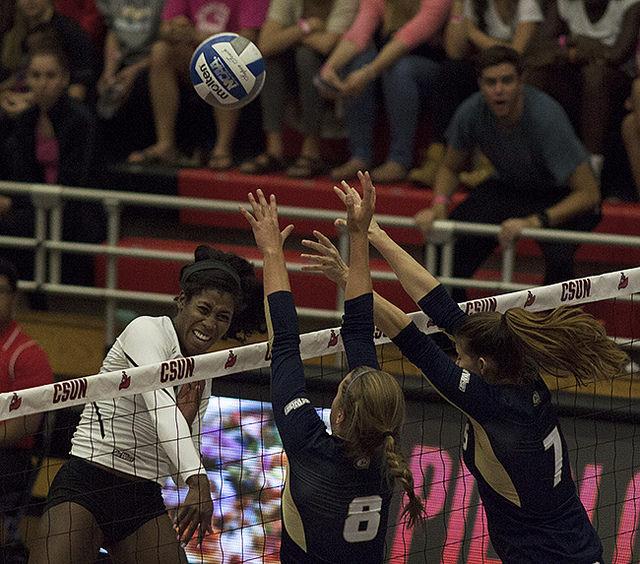 On Nov. 30 the Matadors received news that they would not be competing in the NCAA tournament this season after they made it into the top 50 as the No. 49 seed.

Danetta Boykin, junior communications major, has chosen not to get distressed about the decision and does not plan on thinking too much on the “should’ve, could’ve, would’ve” moments of the season.

Over the course of the season, she has made her presence felt as an outside hitter for the women’s volleyball team which just closed out its season (19-9 overall, 10-6 Big West) on Nov. 29.

Although Boykin has only been a part of the Matadors this past  season, she quickly became a staple in many of the team’s plays with an 3.24 kills per set and an average hitting percentage of .292. Boykin’s play earned her a spot on the 2014 Big West women’s volleyball All-Conference Team.

“Danetta is the best outside hitter in the conference period,” said CSUN head coach Jeff Stork in a press release via Go Matadors. “So it’s not a surprise to me that she is on the first team.”

Before this season, Boykin was a student at Los Angeles Pierce College where she led her team to two undefeated seasons in 2011 and 2012. She became a two-time All-American, MVP of the State Tournament in 2011 and Western State Conference Most Valuable Player in 2012.

That experience was one that Boykin felt was helpful in her transition to playing Matador volleyball.

Competitive, as Boykin would describe it, would be a minor understatement when labeling her gameplay. She can often be seen screaming and jumping in extreme excitement when she (or any Matador for that matter) completes a successful play.

Her passion for the sport and her competitive nature can sometimes get so intense that she has to remind herself to have fun, whether they win or lose, and not take things so seriously.

That reminder, which was inspired by her teammates, has helped her generate lifetime friendships with her fellow Matadors. Two of which she insists will be in her wedding someday.

“It’s just that you could always count on her giving 100% in practice and in games,” said Allen. “She was always trying her hardest to make herself better and her team better.”

Boykin has also acknowledged how the endless support from her mother, grandparents and coaches have helped shaped her into the player she is today but put emphasis on the backing she has received from her brother.

“My brother is my number one fan,” Boykin said. “Without him, I would have never finished my hardest game at Pierce. I looked in the crowd and he gave me this look like ‘come on, sis! Do what you do!’ We ended up winning that game”

She would rather spend her time envisioning her return next season as a senior and her plans on continuing her volleyball career even after her days as a student-athlete are complete. No matter what her future holds, Boykin wants to be able to say she made a difference in someone’s life through the sport that she holds dear.

“I play because I love it and my passion for it is so big,” Boykin said. “I want to be a model for other girls who have had a struggle and I want them to know that it’s okay to go through that struggle, just as long as they also know that there is a way out.”