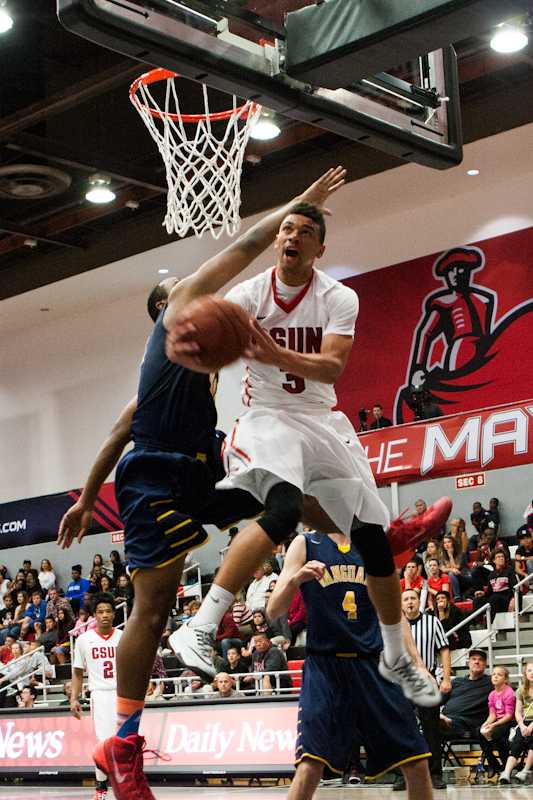 Senior forward Stephan Hicks goes for a lay-up in CSUN's 70-58 win over Vanguard.

Devonte Elliott recorded season-high rebounds and points as the Matadors (3-7) ended their five-game losing streak with an impressive 70-58 win over the Vanguard Lions (3-1).

“We did a really good job defensively,” said Theus. “It’s nice to get back on the winning track. The last five games were frustrating”

CSUN opened up the game with a 12-0 run, with junior guard Landon Drew leading with eight points after sinking two shots from downtown. The Matadors defense kept the Lions at only three points within the first five minutes.

Vanguard started to pick up the pace halfway into the first half, cutting CSUN’s lead to 10. Lions guard DeAngelo Jones sunk a three-pointer to cut the lead to 10, but Elliott retaliated with a vicious dunk at the other end to make it 22-10.

With minutes left in the half, the Matadors saw their lead cut considerably before sophomore guard Aaron Parks drained a long two-pointer to regain a comfortable seven point lead. Vanguard continued to storm back in the last five minutes as they scored back-to-back three-pointers to cut CSUN’s lead to 30-26.

“Teams make runs, and they were going to make a run at one point,” said Theus.

The Lions killed time before missing a crucial three-pointer, but got the rebound and cut the lead to just three at 31-28. Senior forward Stephen Maxwell responded with a dunk at the other end of the court before half-time, with CSUN leading Vanguard 33-28. The team shot for 44 percent and outrebounded the Lions 22-16 in the first half. Drew lead the scoring with eight points while senior forward Stephan Hicks and Elliott were tied with six points and five rebounds apiece.

Drew opened the first half with a missed three-pointer, before the Lions turned over the ball to let Maxwell sink a lay-up. Shortly after, Hicks capitalized on two Lions turnovers, missing a dunk after stealing the first one, but sank the lay-up for the second. The Matadors continued their energetic start when Hale-Emerson scored to restore their 10-point lead.

With the score at 47-39, Hicks picked up the ball in the key and spun around his defender to drain a lay-up. Drew sank his own lay-up moments after to bring him to give the Matadors a 13-point cushion. The Lions would pick up their game to cut the lead to eight, but the Matadors quickly regained their momentum and continued to control their own fate.

Hale-Emerson picked up his tenth rebound of the game with five minutes left, picking up back-to-back rebounds off of the Lions missed free-throws. It would be a slew of free-throws at both ends of the match until the final three minutes of the game with a lay-up from freshman guard Taelin Webb. Elliott got his eighth rebound shortly after, earning a season-high in rebounds, and scoring in double figures for the second time this year.

“I tried to play with energy,” said Elliott, “I tried to give my team energy in the process.”

The Matadors retained their lead and finished the game 70-58 to snap their five-game losing streak. Theus was well-aware of the game at hand as well.

“These kinds of games are trap games,” said Theus. “These games are the ones you’re suppose to win.”

CSUN have a few days of rest before flying to Oregon to face the Ducks on Dec. 17 at 8 p.m.