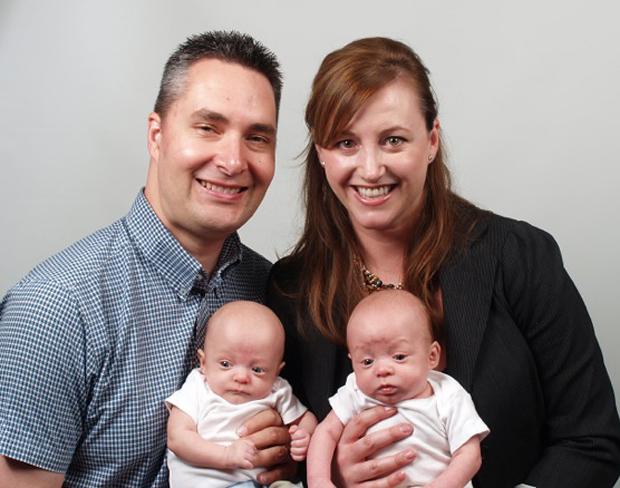 Dianne Frehlich and Dr. Shane Frehlich, chair of the CSUN kinesiology department, pose for a photograph with their twin bots, Max and Miles, in 2012. In May 2012, Shane was diagnosed with a rare form of leukemia. CSUN and Be the Match are partnering to host a bone marrow registry drive on campus in Redwood Hall, West Patio, for Frehlich from 10 a.m. to 4 p.m. Dec. 9. Photo courtesy Dianne Frehlich.

Two years ago, the CSUN community found out about Dr. Shane Frehlich, a CSUN faculty president and kinesiology professor who was diagnosed with cancer and was declared cancer free after four rounds of chemotherapy.

On Nov. 6, Frehlich was admitted to the hospital because his cancer came out of remission.

Frehlich was diagnosed with acute myeloid leukemia, a cancer of the blood and bone marrow in which the marrow produces abnormal cells or platelets. Now, the Frehlich family is hoping for a bone marrow transplant for the professor.

Frehlich was admitted to the hospital just days before his newborn son, Jonas, joined his twin brothers, Max and Miles. at home.

Jonas was born with Beckwith-Wiedemann syndrome, an overgrowth condition, in which his body is enlarged and could lead to serious complications. Jonas spent a month in the natal intensive care unit to be monitored by doctors. Just days before he was released from the hospital, Frehlich was admitted for chemotherapy, so they haven’t been able to spend time together.

“He hasn’t been home with his whole family yet,” said Kristy Michaud, an associate professor of political science and board member who serves with Frehlich.

Michaud knows Frehlich from their work together, and they have become close family friends. Both have twin children about the same age. So it was a shock when Frehlich had his routine check up and got the news that his cancer had returned.

For Frehlich’s wife, Dianne, having Frehlich in the hospital has been difficult. Since the chemotherapy affects the immune system, children under the age of 7 are not allowed to come in contact with patients; therefore, the couple’s kids are not allowed to be with their dad.

“The kids are having a tough time because Shane is a very involved father,” Frehlich said.

Depending on how his recovery from the treatment goes, Frehlich is expected to return home for two weeks and then go back to the hospital with hopes of a transplant.

“I don’t know how many rounds of chemo he could handle,” Michaud said. “He’s already had five.”

“I would love to be with him but who would watch the children,” Frehlich said.

Besides finding people to watch over him, the family will have to figure out the medical expenses. The problem with health care is that the insurance does not cover the mandatory hotel stay. It is estimated that 60 percent of bankruptcies occur due to medical bills.

“One of the biggest stresses is how does the family survive,” Frehlich said.

Michaud is encouraging the community to help Frehlich through a number of ways.

CSUN and Be the Match are partnering up to host a bone marrow registry drive on campus in Redwood Hall, West Patio, on from 10 a.m. to 4 p.m. Dec. 9. All it takes is a simple cheek swab. Join online http://join.marrow.org/hope4shane by entering the promo code: Hope4Shane. Registering is simple and many people don’t do it.

Young adults ages 18 to 44 are important donors because they have the greatest chances of providing for successful transplants.

“Donating bone marrow is a lot easier than it used to be,” Michaud said. “Now all it takes is blood getting drawn.”

The community is also providing financial support for the family’s medical bills through www.gofundme.com/FrehlichFamily and by giving the family a meal through https://mealtrain.com/vndlw.

“[The warm meals] brought tears of happiness,” Frehlich said. “The community around us has been so supportive.”

Frehlich has so far been receiving a lot of support from the community.

“He’s smart, generous and very inspiring,” Michaud said. “I’m not surprised so many on campus are offering to help.”