Commencement ceremonies to be held at Oviatt, Associated Students announces 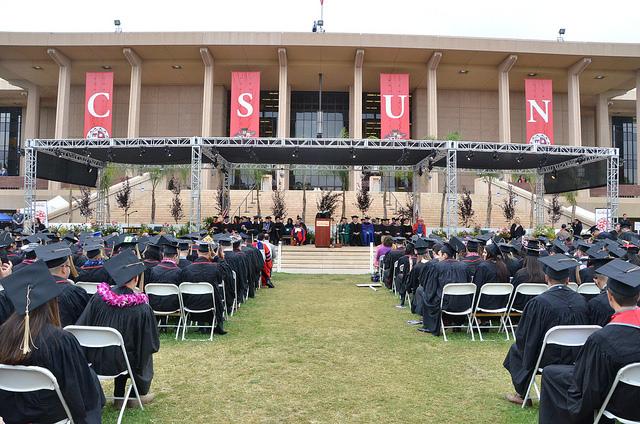 CSUN administration and Associated Students (AS), along with the voices of students have changed the platform for the way 2015 commencement will be held by increasing the number of tickets distributed due to the addition of a separate ceremony for graduate students.

Early in the semester, the university proposed to relocate future commencements to a larger location in order to accommodate the large amount of guests. They proposed the North Field due to it’s high capacity of 15,300. The Oviatt Lawn has a capacity of 9,180.  According to CSUN, there is roughly 10,000 students and guests at each college ceremony.

“Many students didn’t want to graduate on another field,” said AS Vice President Talar Alexanian. “They wanted the Oviatt because they feel it’s the core location of the institution. It’s a 15 year old tradition to have commencement at the Oviatt.”

Due to a popular demand from many students, the Oviatt Lawn will remain the as the desired location for all commencement ceremonies.

The university administration proposed this plan to AS in early October, and AS had two weeks to get the word out to students. AS conducted school-wide student surveys and held public forums in order to get student opinions. According AS, students wanted to hear everyone’s opinion, from freshman to seniors, because the 2015 commencement would set the platform for the way future commencements are planned.

The main concern CSUN faced was the location of the Oviatt Lawn wasn’t large enough to fit the amount of guests graduates wanted to invite.

“I’d rather have my graduation short with as many people as I can bring,” said Miguel Bonilla, graduating senior. “It’s my graduation, the more tickets I can get the better.”

According to Bonilla, it doesn’t matter where his graduation is held as long as long as there is a stage and his family to see him.

Before, students were only allowed up to four tickets. However, with the new change, students are allowed to have up to seven tickets with the possibility to receive more. However, if the North Field was chosen, students would of been able to get nine to thirteen tickets.

The change to seven tickets is possible now that the university has separated graduate and undergraduate ceremonies, allowing graduate students to receive their own ceremony. This additional ceremony has increased the number of seats available for other colleges.