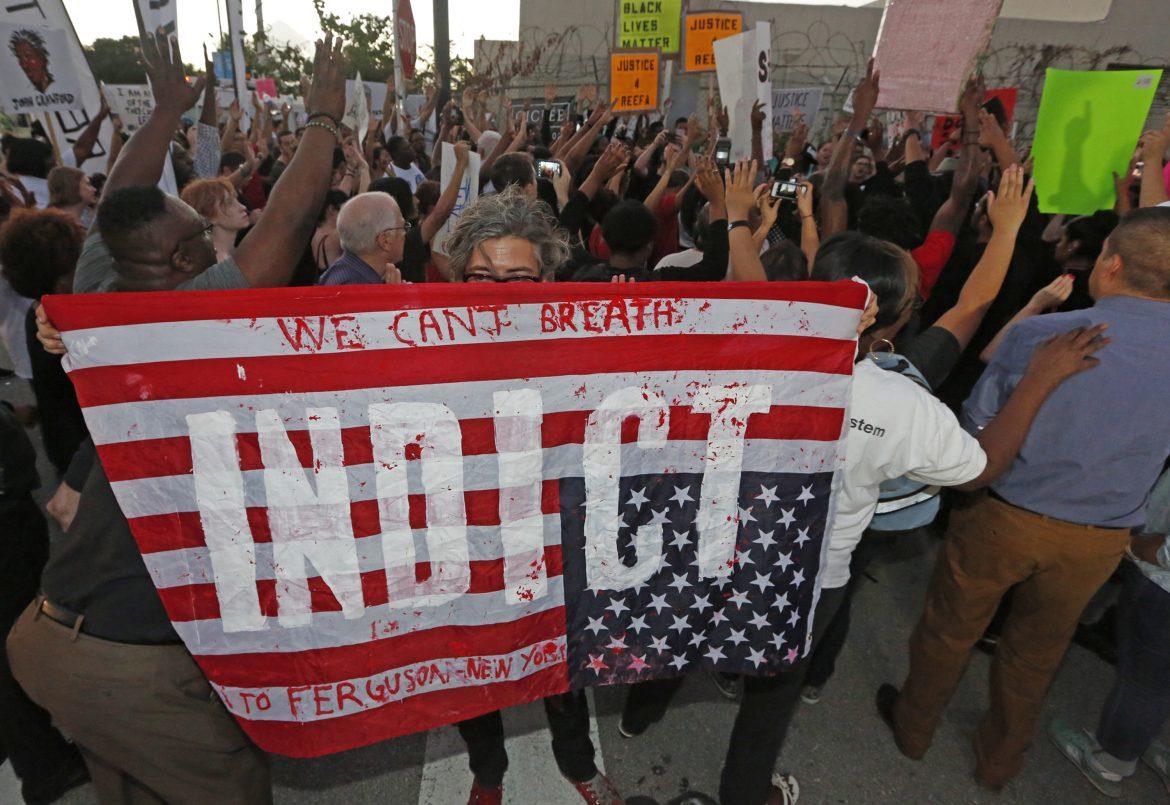 Do you really expect us to believe that this is a post-racial society that we are living in? How is that possible, when there are factual, innocent deaths of African American citizens happening all around us?

With social media at our fingertips 24 hours a day, seven days a week, the truth is no longer hidden and marginalized voices demand to be heard. Not just for the sake of the recent innocent lives that have been taken away from us by the police force. This is for our families and friends and the many more that we as a society fear will be taken from us.

It comes as no surprise the viral effects stirred by the Garner case, and as we just started to digest the harsh aftermath of the unjust ruling of Michael Brown’s case, we are faced with the shock of yet another unlawful indictment.

Dec. 4, the grand jury announced no charges against Daniel Pantaleo, the officer that was caught on camera for choking and killing the innocent life of Garner.

If you are one of the select few that successfully managed to exclude yourself from social media, or the world for that matter, on Dec. 4. Pantaleo, an NYPD police officer was caught on camera for forcefully and without any obvious reason, putting Garner into a chokehold. This event killed Garner and Pantaleo was not indicted by a grand jury.

Garner, a black male was unarmed and illegally selling untaxed cigarettes on the sidewalk when two police officers approached him and after a minor argument tackled Garner to the ground. Next, while on the ground, Pantaleo, continued to wrap his arms around Garner’s neck (in a chokehold position, which is banned from use in the NYPD), resulting in Garner’s death.

Yes, Garner said a couple words of rebuttal but as shown on the videotape, that was filmed by an eyewitness standing near by, Garner never used any force, nor was he shown as what police officers would consider a threat. Or, better yet, is the selling of illegal cigarettes as a reason to choke and kill a man?

Although having a very similar effect on our society, with more emphasis on African Americans, this indictment could not have come at a worse time. A worse time for black people in our world and police officers alike.

Just a month prior, the Brown case reached a verdict echoing Garner’s. Brown an innocent young black man was shot six times by Darren Wilson, a white police officer. Wilson was not indicted, sparking rage and protests throughout the country. Although both cases still hold the same weight in the public eye, Brown, only 18 years old, had many more years left on this earth. This left many people to believe that there is no justice if this is the behavior that we are allowing of the officers “protecting” us.

Similar in findings, although Brown’s case has less evidence, it was very clear that both police officers used unnecessary force, prior to ending both of these lives. Garner’s case is proven on videotape, while Brown’s case was proven in autopsies and witnesses. And, the puzzle that brings both cases to an almost exact similarity, grand juries, in back-to-back month rulings, called “no Indictment” for both officers.

All charges were dropped. Police officers were set free. The Browns and Garners everywhere are still in societies’s “jail.”

Many thoughts have raced through my head as I frantically skimmed through all the social media newsfeeds and online news sites, while listening to talk show hosts and family friends, I hear so many opinions. I sometimes forget whose side I should take or what to really think of all this. I wonder if these situations may continue to prevail in our obviously corrupt system.

However, when I do take the time to quietly reflect on both cases, watch videos of Garner and Brown protestors, I can only think of one question:

“Would I be this indifferent if it was one of my own brothers?”

And the answer is, absolutely not!

Police officers are supposed to protect us, not feel inferior to us, not take every opportunity to flex their power over us. Yet we continually see it happening over and over again. Luckily, not everyone subject to police brutality has been killed but it should only take one incident for a change to take place.

I am an African-American woman, with what I would call an unusual optimistic outlook on our society. I grew up believing in a post-racial society before I even knew what it meant. With refugee parents, they had the vision of the American dream education for their five children and without any real idea of “racism” in their culture. They made sure to pass this ideology on to their children.

However, as I continue to remain optimistic, still believing that not all cops are bad and not all black people are innocent, I can’t continue to believe that racism doesn’t exist in our world. Had those men been white, there may have been a more pleasant outcome. An outcome where the victims were still alive in the end.

Yes, cameras on police uniforms are a step in the right direction but this will not change the actual issue: racism.