Women’s Volleyball: Casey Hinger’s legacy ahead of the class 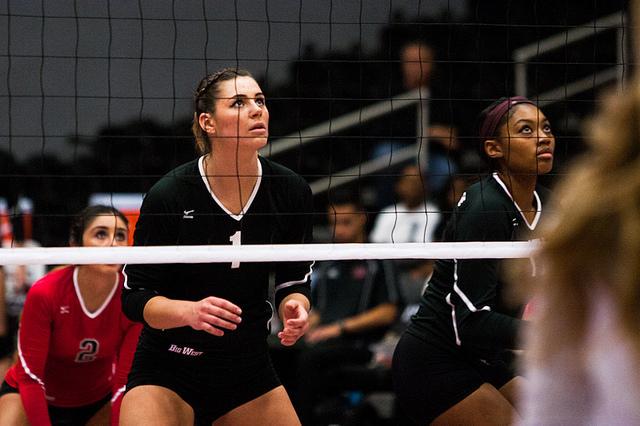 Since her debut in 2011, Casey Hinger, senior child development major, has been able to make impressive strides as a middle blocker for the women’s volleyball team.

Hinger ended her last season as a Matador with a total of 323 kills (3.30 kills per set), 276 digs, 24 aces and 91 total blocks. She was also named as one of the top 10 eligible players to be nominated for the NCAA Senior Class Award, an award voted by fans and media to recognize the sport’s top student athlete on and off the court.

“It is probably the biggest honor that I’ve ever had,” Hinger said. “It’s so humbling to be recognized with all these other people who have accomplished so much.”

The 6 foot 2 inch Fullerton native began playing volleyball at Valencia High School, after much prompting by her mother. Hinger was initially hesitant, claiming the look of the uniforms were ridiculous, but instantly fell in love with the sport.

Hinger has since racked up a plethora of accolades since her start as a Matador, such as becoming a three-time first team All-Big West selection and a two-time AVCA honorable mention All-American. She was also recently named AVCA All-Pacific South Region for a program record third time.

Head Coach Jeff Stork said he has witnessed Hinger’s game grow over the past four years. Well she was already a good player at the net, Hinger has grown into her increased roll as a passer, Stork said after she was named to the all region team.

“She is a very special player, probably the best to ever play at CSUN,” said Stork in an interview with Go Matadors Dec 1. “I think Casey is the best all-around volleyball player in the conference.”

One of her teammates, senior liberal arts major Natalie Allen, has seen Hinger’s game improve since her first game and believes that this proclaimed perfectionist is more than deserving of those awards.

“Casey evolved into an amazing all-around player, and as a middle that is usually unheard of,” Allen said. “As a player, I would say that Casey grew the most as a leader on the team. Because she is a perfectionist, she strives to make her game as perfect as possible and that is easy for others to follow.”

Being on this team has not only been helpful to Hinger as a player but also as a person. Not only did she learn lessons in time management, teamwork, leadership, etc., but she also walked away with the value of never giving up.

“We started off as the underdogs, so I think it was really fun starting off my freshman year being ranked in the preseason as eighth to being Big West Champs in my junior year and being really big contenders in my senior year,” Hinger said.

Even with all the hard work Hinger has put into the game, she always finds time to have fun with her teammates, according to Allen. Hinger would probably be the first to join, in the event that a locker room dance party manifests and has no problem being spontaneous (even if it means sporting a rather interesting dye job on television).

“One of my favorite moments is when I convinced Steffi (Miller, teammate, junior setter) to dye my hair blonde out of the box and it turned orange,” Hinger said. “I was devastated and we had a game the next day that was going to air on ESPN. The reporter ended up asking ‘Oh, you changed your hair?’”

With all the fun moments and athletic accomplishments, Hinger is leaving behind a notable legacy that those who have seen her play will have yet to forget.

“If people have seen Casey play, I think that they will remember how good of an all-around player she is and how determined she is in every game,” Allen said. “She is one of the hardest workers on the court.”

Despite the team not winning in the Big West conference or making it to the NCAA tournament, Hinger is confident that the players coming back to lead the team in the next season will create a more successful term.

“I still have a lot of faith in this team and I think that the people who are still here can do such incredible things for this program,” Hinger said. “I want people to remember me for striving to be the best under any type of circumstances”

As for her career’s conclusion, she will not let a postseason absence hinder her final season. “…We didn’t accomplish all of the goals that we wanted, but at the end of the day, I think that we all grew as volleyball players and people.” Hinger said.

The middle blocker also plays for CSUN’s sand volleyball team. She gets another oppurtunity to play with familiar teammates like Allen, however she still prefers indoor.

“I like it but indoor is my passion,” Hinger said.

After Hinger completes her academic vocation at CSUN, she plans on continuing her volleyball career oversees and later returning to school for a Ph.D. in clinical psychology.