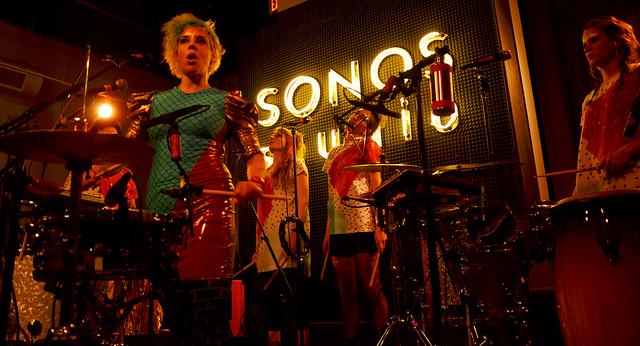 Folky, percussive and beautifully eccentric, five-piece band tUnE-yArDs put on an interactive and upbeat evening with a show sponsored by Pandora and Sonos in Los Angeles Tuesday night at the Sonos Studios.

With over 4 million hits on Pandora and previously playing on an episode of Conan the night before, the group showed why they are an artist quickly on the rise with an power-ensemble promoting their new album, “Nikki Nack.” tUnE-yArDs has an impressive percussive, futuristic sound, and the highly energetic performance at such a cozy venue is one people need to visit much more often.

Guests were treated with free drinks at the bar and interesting art pieces at the Sonos Studios, a venue designed to heighten the audience’s musical experience. Fans were waiting for their highly anticipated band, all the while relaxing, drinking and wandering around the small building.

As the quintet took center stage, all eyes were on front-woman Merrill Garbus, who wasted no time to loop her vocals into her amplifier and get the show kicking. Opening with “Stop That Man” and “Sinko,” the group instantly entranced the audience with bumping drums and congas and carefully choreographed vocal harmonies and dance moves.

With subtle synthesizers at first and climaxing at towards the middle of their songs, tUnE-yArDs gets the crowd riled, and into their music.  Garbus’s minimal instrumental use and maximum percussive usage creates an atmosphere that is one to keep you hypnotized by their music.

tUnE-yArDs will close out their Los Angeles tour leg with a show Wednesday night at the Wiltern, before heading out north to Oakland and then Washington.