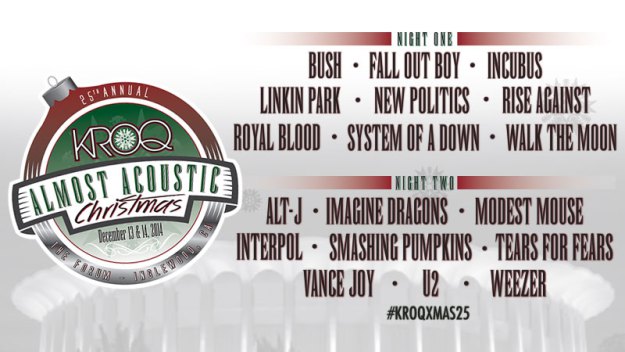 The 25th annual Almost Acoustic Christmas concert celebration kicked off on Saturday at the newly renovated Forum in Los Angeles.

The show benefited “Para Los Niños,” a nonprofit organization which helps kids that are at risk of poverty by providing support and education opportunities.

Tickets to Saturday and Sunday nights sold out within just 30 minutes of being on sale due to the amazing lineup which included System of a Down, Linkin Park, Incubus, Rise Against, Bush, New Politics, Walk the Moon, and Royal Blood.

The first bands got a set of 25 to 30 minutes, but when it came down to the last three bands, the set time increased.

The Forum made sure not to waste any time after each set. As one band finished performing, the next one came on right away, thanks to a turntable platform on stage.

The last three bands — Incubus, LInkin Park, and System of a Down — all happened to be from, coincidentally, Southern California. Once Incubus hit the stage, most of the seats were full and the crowd sang along to hits such as “Anna Molly” and “Drive.”

After that, Linkin Park took the stage and started off with a solo from their deejay, Joe Hahn, which transitioned into the song “Burn it down.”

Linkin Park gave an electrifying performance and they played hits such as “In the End,” “Numb,” and “What I’ve Done.” They performed their new single “Rebellion” from their latest album “The Hunting Party.” This song features the guitarist of System of a Down, Daron Malakian. He came out on stage and performed with Linkin Park, which got the crowd even more excited, because System of a Down was next to come on stage.

Linkin Park closed their set with their hit “Bleed it Out,” which featured the lead singer of Rise Against, Tim McIlrath.

The moment of anticipation came to halt when System of a Down came on stage for their first performance of 2014.

Starting the set off with their hit, “Chop Suey!”, the crowd headbanged and sang along with lead singer Serj Tankian. They performed hits such as “Aerials,” “Lonely Day,” and “B.Y.O.B” among their 16-song set.

At one point, System of a Down bassist Shavo Odadjian took a picture of the crowd with his cellphone asking everyone to smile.

“There is nothing acoustic about this,” said lead guitarist Malakian.

The highlight of the show was when System of a Down invited a young man from Make-A-Wish Foundation to help finish the show with their hit “Sugar.”

The young man, named Christopher, got his wish granted by being able to play guitar on stage with his favorite band.

System of a Down’s effortless performance made Almost Acoustic Christmas a night to remember.