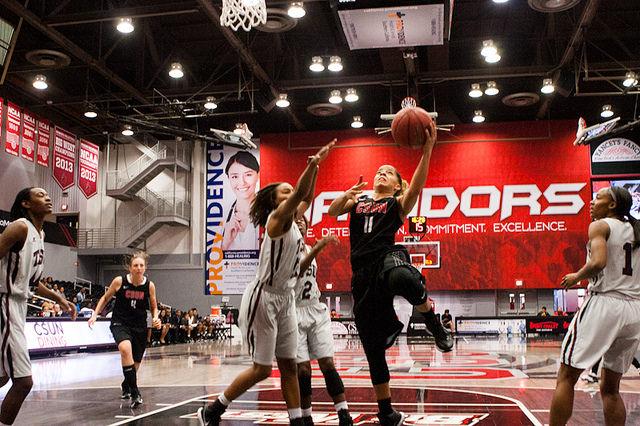 Done in by sloppy turnovers and lack of execution, the Matadors (10-5, 0-1 Big West) lost to the UC Davis Aggies (6-7, 1-0 Big West) 60-49 on Thursday night, making them the last team in the Big West conference to lose at home this season.

“I didn’t think we played well at all in the first half at all,” head coach Jason Flowers said. “We were lucky to be in the position to have a tied basketball game because I thought that they kind of did the things that wanted to do. They controlled things in the second half. The lack of execution on the offensive end, giving them open looks, it wasn’t anything that surprised us.”

Senior guard Ashlee Guay led all scorers at the half with 11 points on 3-5 shooting from the 3-point line and 4-9 overall. Fellow senior guard Cinnamon Lister was 2-2 from the three-point line and senior center Camille Mahlknecht scored six points on 2-7 shooting. Senior Janae Sharpe added three points, an assist, a block, and a steal. Senior forward Randy Friess lead the Matadors with six rebounds.

“I feel like we had a lot of open chances that we didn’t capitalize on” Guay said. “We missed a lot of layups so that’s where we struggled. When we did things right we scored correctly.”

“We just had mental lapses where we didn’t finish or we didn’t hit the open person,” Guay said. “It was more execution. I don’t think their size really hurt us. It’s anyone’s game.”

Mahlknecht picked up her fourth foul with 11:06 left in the second half and finished with 6 points on 2-8 shooting with five rebounds, an assist, an a steal. Junior center Bernadette Fong subbed in for Mahlknecht and played 23 minutes. Junior Aggie junior forward Alyson Doherty had 16 points and 11 rebounds while going 6-7 from the free-throw line.

“I just think we didn’t do a good job of finishing in general,” Mahlknecht said. “Doherty is a big inside presence but she’s not a shot blocker. The guards did a good job of finding the post players and we just couldn’t capitalize on it.”

“Regardless of who our opponent is, we feel if we do what we’re supposed to do and execute then we’re a tough team to beat,” Flowers said.

The Aggies defense locked down on the Matadors and UC Davis ended the contest on a 20-2 run. The Matadors extended their lead to 47-40 with 8:51 left as Lister found Fong in the low post for a lay-up. That was the last field goal for the Matadors. Sharpe made two free throws in the closing seconds of the game.

“I take full responsibility” Flowers said. “I have to do better job of getting the team ready and prepared to play in our next game. Davis, hats off. They made plays and their kids played well. They came in here and got off to a great start for their conference season.

“We just need to be disciplined and do what we’re supposed to do” Guay said. “Every single time you’re getting everyone’s best shot.”

The Matadors play Hawai’i, who lost at Cal Poly Thursday evening, on Saturday at 4 p.m. in the Matadome.