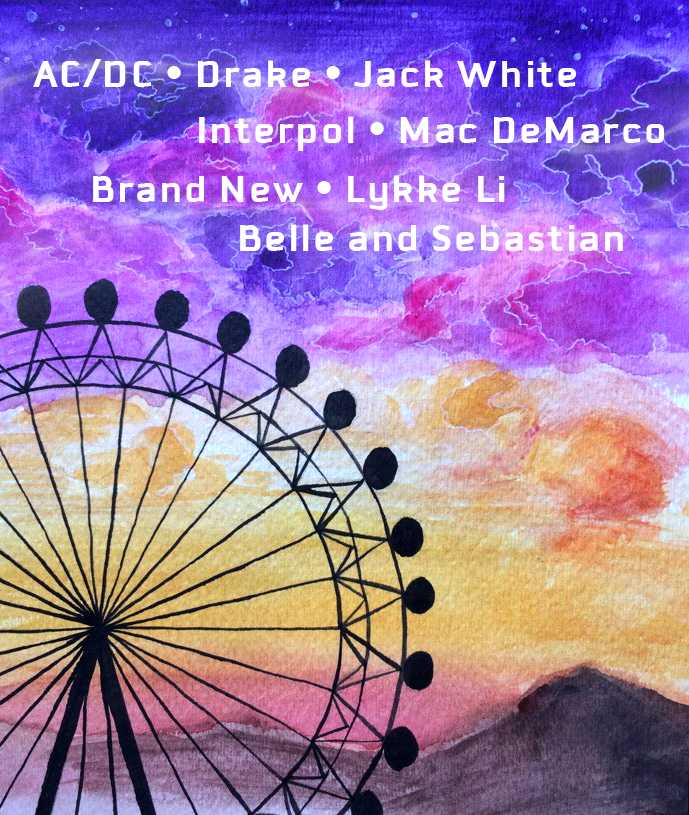 The kick-off of festival season may be just a few months away, but the 2015 Coachella Valley Music & Arts Festival lineup is already out, with festival goers old and new stirring with excitement. As usual, concert promoter Goldenvoice put out a stacked lineup, but does it please you?

Since 2011, Goldenvoice has surprised festival goers with headliners like Kanye West, Snoop Dogg & Dr. Dre, Blur, and OutKast. This year wasn’t any different with AC/DC closing out Friday night, Jack White closing out Saturday night, and wait for it, Drake closing out Sunday night. Jack White may not come as a surprise to many due to the release of his acclaimed album Lazaretto last year and his White Stripes fame. Who are the real bombshells on this year’s lineup? Classic Australian rockers AC/DC and rapper Drake will begin and end the festival while White takes the middle night. The lineup is also heavy with electronic acts, a few being Kygo, Alesso, David Guetta, and Kaskade.

Aside from the actual music, there is plenty to do at the festival. From excellent food to vendor tents, you’ll always find something to fill your time during the day, not to mention the excellent, smaller bands that play earlier in the day.

One of the most notable acts on the lineup this year is Tame Impala, who will be playing the festival for a 3rd time. They’re sure to impress with songs old and new, as their records Lonerism and Innerspeaker are already classics and only years old. New York based band Interpol will also be making an appearance at the festival, after the long awaited release of El Pintor. They’re sure to be playing hits like “PDA” and “The Heinrich Maneuver.” Notable female artists that are slated to perform and are worth going to Coachella for are St. Vincent, Lykke Li, Jenny Lewis, Angel Olsen, FKA Twigs, and Florence & the Machine. Each of these ladies are sure to put on an absolutely incredible show.

As for reunions this year, Ride and Drive Like Jehu will be a huge draw for festival goers. Scottish band Belle and Sebastian will also be back in support of their new album, Girls in Peacetime Want to Dance. If you’re not a lover of the huge bands booked for the festival this year, some must see acts this year are Mac Demarco, Bad Suns, Jungle, Parquet Courts, and Joyce Manor.

Not entirely sure how to make it to the polo fields this year? Coachella may be sold out, but finding a ticket isn’t as hard as you may think. Talk to your friends who may have bought presale tickets, or check Stubhub. There’s always a way to get to Coachella Valley!