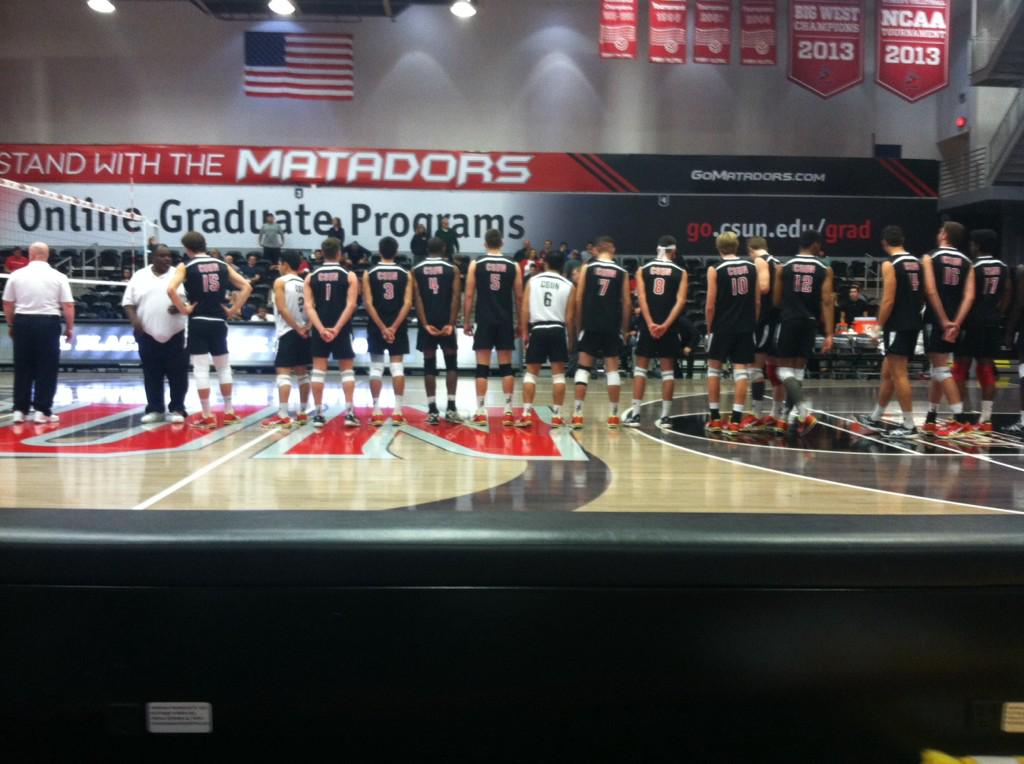 CSUN lines up before tip-off against UCSD at the Matadome. The Matadors swept the Tritons to make it two sweeps in a row. Photo credit: Sarah Goulding

“For us to win, we needed to focus on us not so much San Diego,” said men’s volleyball head coach Jeff Campbell.

Sophomore opposite hitter Damani Lenore had a match-high 12 kills and hit .348 on 23 swings. Junior outside hitter Sam Holt hit .308 on 22 attacks with 11 kills, while senior middle back Greg Faulkner had a career-high two aces to accompany his nine kills while hitting .400 on 15 swings.

Sophomore libero Nick Alegrado had a season-high six digs to contribute to the win and senior setter Travis Magorien had three with 35 assists. With two aces for the evening, sophomore outside hitter Bradley Sakeida now had six for the season; four in the last two games.

CSUN was in complete control of the first set, hitting .400 with 16 kills to UCSD’s 10 kills and .240 hitting. They never gave up their lead, nor did they allow the set to become tied at any point. Keeping a steady three-to-four point lead was no problem for the Matadors, until the visiting Tritons began to push back towards the end of the set. No matter, a kill by Sakeida propelled the team to an ensured win. The win was captured with a block from Holt, Magorien and Faulkner.

The second set came even easier than the first, bringing 28 kills and a .364 hitting percent. UCSD hit -.227 and had just 13 kills. The set started off slow, with the Matadors coming from behind on the first set point. The score was going back and forth on each point; 3-3 then 4-4 until a kill by Holt gave CSUN a three point run and the lead-which they never gave back.

The score was now 14-10 in favor of the Matadors. With a kill from Holt, CSUN was given their largest lead yet. Following Holt’s kill, came a service error, that gave UCSD one of only three more points they would score in the set.A kill from Lenore sealed the victory.

Set three brought what Coach Campbell referred to as the “natural psychology of volleyball,” in which the team has won two previous sets and does not play as well in the third as they did in the first two.

“We have to get better at challenging ourselves and being ready to go in that game, in that third set,” Coach Campbell said.

From the first point, the Matadors had to fight back and make a come-from-behind win. It wasn’t until the score was tied at 17 and UCSD committed an attack error that CSUN was able to take the lead 18-17.

“The hardest part was when we went down in the third set and had to battle back,” said Holt. “[But] I thought we passed really well today, we’ve been struggling passing…so I think we really stepped up tonight.”

“It’s a good win, but we still have to be ready to go come Monday,” Faulkner said.

The Matadors improves to a 3-2 record and remain undefeated at home.

CSUN takes on the No. 2 ranked Pepperdine this Wednesday Jan. 27 at 7 p.m. for their first away game of the MPSF season.