Call it home: An interview with Tennis System 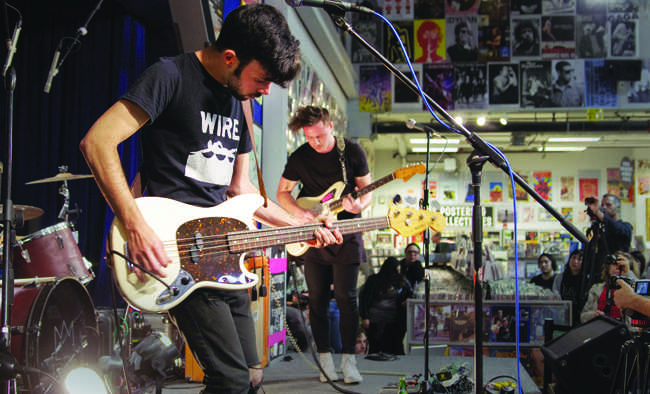 Three-piece band Tennis System held an all ages set at Amoeba Music on Thursday. The performance was hosted by Amoeba Music and Converse Rubber Tracks. The band played tracks from their LP, Technicolour Blind, along with some new songs to a large crowd of fans. A signing was followed after the set along with a voucher for Tennis System’s free 7” vinyl made especially for Amoeba.

Tennis System was formed in DC by front man and guitarist, Matty Taylor. Zachary Bilson on bass and Hector Gomez on drums joined the band after Matty’s move to Los Angeles. The band just returned from a busy tour all over the US and is now playing several shows right here in Los Angeles. Before their set, Matty, Zachary, and Hector sat down for an interview discussing their inspiration, tour life, and Matty’s love for Drake.

How is life being back from tour?

Matty: We were on tour for two months and you get this high from being tour. When I came back, it felt melancholy and all I wanted was to be in bed.

Zachary: We ended up being really good friends with the band we went on tour with, (Be Forest) and it was heart wrenching to say goodbye to them.

Hector: We went through post- tour depression. That stuff is real!

Do you have any funny or cool tour stories?

Matty: When we were driving in Idaho we got stuck in a gnarly blizzard. I had to drive through the mountains and we drove without chains because we had to get to a show. It was one of the gnarliest drives I’ve done. Also driving from Arcata, California to Seattle through the Redwoods was one of the most stressful drives.

Hector: It’s because we wanted to go to North Bend, Washington to check out the original restaurant from the show Twin Peaks.

Zachary: Oh, there was this time in Bellingham, north of Seattle where we parked our van too close to another car behind us outside a bar. These drunken guys walked out and tried to start a fight with us out of nowhere. They were menacing us for a bit then went back inside. The best thing is that none of those guys owned the car we parked next to! Later we also found out that bar was a place Charles Manson hung out in.

What are some of your pre-show rituals?

Matty: We listen to a lot of jazz before a show because if we are really stressed out from a show the night before and a long drive or running late it and it helps us meditate. We also drink Yerba Mate.

Matty: We are looking forward to South By and we have a whole record’s worth of songs that we are super anxious to track.

Hector: It’s going to be the first album with the new lineup.

Matty, being originally from DC, how does writing and finding inspiration differ after moving to Los Angeles?

Matty: It’s a weird thing, I don’t write the same way I used to when I lived in DC. I used to write songs in my bedroom with the door closed because it was always so cold. A lot of the writing happened in the winter time.

But here, everyday is a sunny day so I find myself in a state of lethargy. Since the weather doesn’t change, my mood stays the same. When I do write a song, something big has to happen to affect me emotionally.

With the new stuff, we are now writing as a band and go about it as a group trying everything out instead of having all the pressure on me. We feed off each other’s energy and it’s healthy in my opinion.

Who are your musical inspirations?

Hector: I just come from a post-punk background so I just follow what these guys want to do.

Zachary: In all seriousness we all connect with are The Cure, Joy Division, but we also all go to a lot of shows together in Los Angeles.

Matty: Also when I’m in a writing state, I try to steer away from anything that remotely sounds or sounds like us because I don’t want to be derivative. I don’t want to be one of those bands who listen to Joy Division or My Bloody Valentine and then write an album that’s an exact duplicate. Why do something that’s already done?

What bands or artists would you love to tour with?

Hector: To open up for The Cure would be amazing!

Matty: I would also love to tour with Kanye West or Kendrick Lamar. I enjoy the idea of mashing up music genres. They do that all the time in DC where a hardcore band would have a show with reggae band and you have this clash of ideas and people who are into different things. I like the idea of bands and cities working together as opposed to saying “Well we can’t do this because you’re rap and you’re rock.” I hate when people try to put all these similar bands together but it would be rad to see two bands not in the same genre.

What are your current favorite songs or artists?

Matty: I’ve been listening to The Marionettes a lot and I just picked up Munki by The Jesus and Mary Chain.

Zachary: I’ve been getting back into Massive Attack

Hector: I just discovered Belong and listening to their album Common Era which came out in 2011 and I know I’m late on it and kicking myself for it.

How has being in a band changed your life?

Matty: Honestly it’s my favorite way to see the world, granted we’ve only been around the US. But what is better than driving around the country with your best friends, play the music love, and share that with other people? That is amazing. That high you get every night regardless if even if only one person sees us is awesome!

Zachary: This guy from Canada drove six hours to see the show in Bellingham and that was really sweet. He ended up getting along with us really well and he also ended up driving to another show in Idaho.

What are some of your favorite hangout spots in Los Angeles?

Matty: My house is my favorite.

Zachary: We are all kind of homebodies and we just like make a lot of music and hang out with each other. For restaurants, I like Sage in Culver City.

Matty: Oh I love Pho Sa one out in Van Nuys.

Final question, do you have any advice for bands that are trying to break into the music scene?

Matty: Don’t give up.

Zachary: Don’t be afraid of change and kiss people!

Amoeba Music will be hosting a signing with Belle and Sebastian on January 20th at 1 PM.