An evening with Vanessa Williams brings nostalgia to VPAC 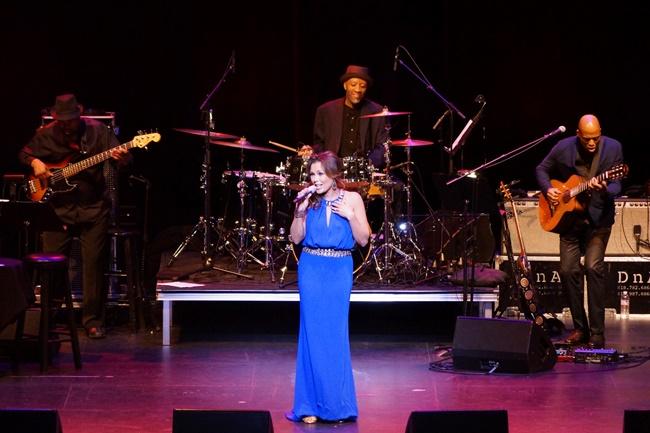 Vanessa Williams was happy to kick off the 2015 season at the Valley Performing Arts Center on Friday night, where she demonstrated that after 30 years in the industry, she’s still got it.

Williams began her 90-minute set with “The Real Thing,” the title track from her latest studio album, released in 2009.

The crowd erupted in applause as Williams walked out onstage in a royal blue gown, radiating glamour.

With a resume that includes Broadway, film and television, Williams failed to disappoint yet again with her incredible voice.

When Williams introduced one of her most popular songs as being from a Walt Disney film, the crowd immediately cheered with excitement.

“It was popular back in the day before ‘let it go, let it go!'” Williams sang out in her best Idina Menzel impression as the audience broke into laughter.

Williams reminded us that “Colors of the Wind” came out in 1995 and surprised herself by realizing how long ago that was. The song turns 20 this year.

Her performance of the song was beautiful and she continued with “Sweetest Days” and “Comfort Zone,” both receiving heartfelt applause from the audience.

She followed with a couple of her older hits, “Dreamin'” and “Love Is,” which Williams noted was on the Beverly Hills 90210 soundtrack.

“I’m still here!” Williams said, referring to her long and illustrious career. “It’s a pleasure to sing hits for you,” she said.

Williams then began to talk about the first concert she ever attended, which was Chaka Khan in Westchester, New York and said that her next song was what she used to sing in high school along with a record player.

Her next song was one she wrote in Nashville when she needed to vent. She explained “Who Were You Thinkin’ About” came from four pages of venting.

When the song ends, a fan from the audience screams “I love you!”

“I love you, too! Thank you for having me,” Williams said.

She continued with her song “Constantly” and introduced her band members.

“My band always amazes me…they’ve been with me for almost 20 years” she said.

Williams went on to discuss her time on Broadway.

“I’ve been lucky enough to do a bunch of things in my career,” she said. “I did Broadway last year for six weeks in a show that was based on music in the Cotton Club era.”

Williams introduced one of her backup singers and co-stars from that show, “After Midnight,” Carmen Ruby Floyd, and let her take the stage with a number from the show while she headed off for a wardrobe change.

She went on to sing one of her four songs from “After Midnight” and talked about her role as Julie in the New York Philharmonic production of “Show Boat” which will air later this year on PBS.

Williams then spoke about working with Sondheim and her time on Broadway as the witch in “Into the Woods” and lamented that “they didn’t call me for the movie but hey, I did it on Broadway in 2002!”

Perhaps one of the roles Williams is most known for is her role on the ABC dramedy, Ugly Betty, for which she received three consecutive Emmy nominations.

“One woman I loved to play was Wilhelmina Slater,” Williams said, to cheers from the audience. “If she had a theme song, this would be it,” she said, segueing into a performance of “Peel Me A Grape.”

Williams went on to sing her ultimate hits, “Work to Do,” “Oh How the Years Go By,” and “Save the Best for Last,” for which she received a much deserved standing ovation.

Williams followed with an encore of “Betcha Never” in a sparkly sequinned party dress which energized the crowd.

Williams is currently on tour across the United States and was happy to be in California, where she lived for many years.