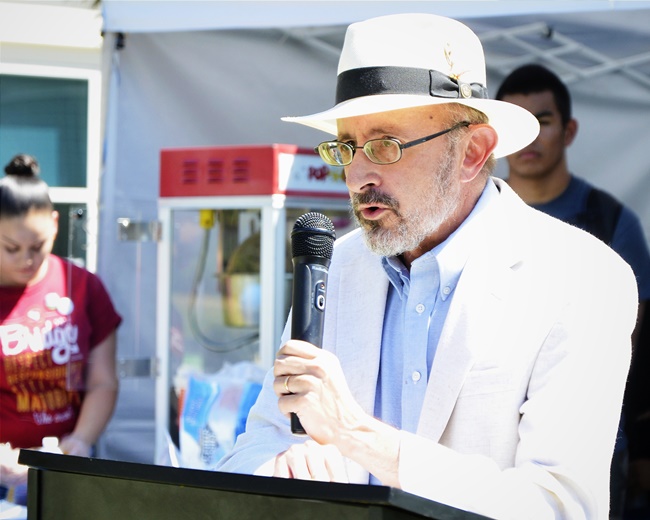 Harold Hellenbrand, provost and vice president of academic affairs, is stepping down from the position at the end of the academic school year. Hellenbrand is shown here speaking to a crowd during the EOP 45th celebration event on Tuesday, Sept. 16, 2014 on the Matador Bookstore lawn at CSUN. File Photo / The Sundial

Hellenbrand has been providing services to CSUN for 11 years, and has chosen to step down after this academic year, as opposed to his initial plan to leave by June 2017.

During Hellenbrand’s pending departure, many of his colleagues and pupils have reacted with respect and admiration for what he has been able to accomplish as provost.

Watkins said the news of his exit made him sad for himself and his colleagues, but happy for Hellenbrand.

“I have had a chance to observe how fellow CSU provosts defer to and seek out his judgment on a wide range of issues that emerge in higher education,” Watkins said. “Harry is a deep thinker who is always able to add a new perspective and he is particularly gifted in sifting and blending different perspectives to find common ground.”

Watkins also said Hellenbrand was not afraid of students, and had no problem interacting with and supporting them.

Christopher Woolett, former Associated Students president, can attest to that. He worked alongside Hellenbrand while functioning as the executive committee chair for both the University Planning and Budgeting Group and the Advisory Committee for Academic Technology.

Woolett said Hellenbrand’s articulation and sharpness in regards to teaching students was nothing short of inspiring.

“The biggest thing I took away from him was that as a leader, you have to make decisions, take into consideration everybody and also be able to see things from a different perspective,” Woolett said.

Nate Thomas, film production professor and president of the CSUN chapter for the California Faculty Association, was momentarily “caught off guard” when he heard the news of Hellenbrand’s choice to retire before 2017.

“Even if [his retirement] came later, I’d still be startled,” Thomas said. “He is such a popular, well-liked figure on the campus…Many have called him a genius. We all will retire one day, but this just kicks you back for a moment.”

Harrison has called Hellenbrand “the provost among provosts,” and with such a description, Watkins believes the incoming provost should try their best to add to what he has accomplished.

“The next provost will be wise to build on Harry’s successes and do her or his part to advance our efforts to improve student retention and graduation,” Watkins said. “He or she will also be well served by continuing to build supportive and respectful relationships with the faculty while, as second in command behind the president, demonstrating a commitment to all of the goals and priorities and employees of the university.”

Despite any initial shock or sadness from those who have worked with Hellenbrand, the sincere esteem for him and his work is all the more prevalent.

“He found a way for us to flourish even through the hard times,” Thomas said. “When there were the cutbacks and furloughs in 2008, he found a way to keep the morale leveled. He did whatever he could to aid and abet.”