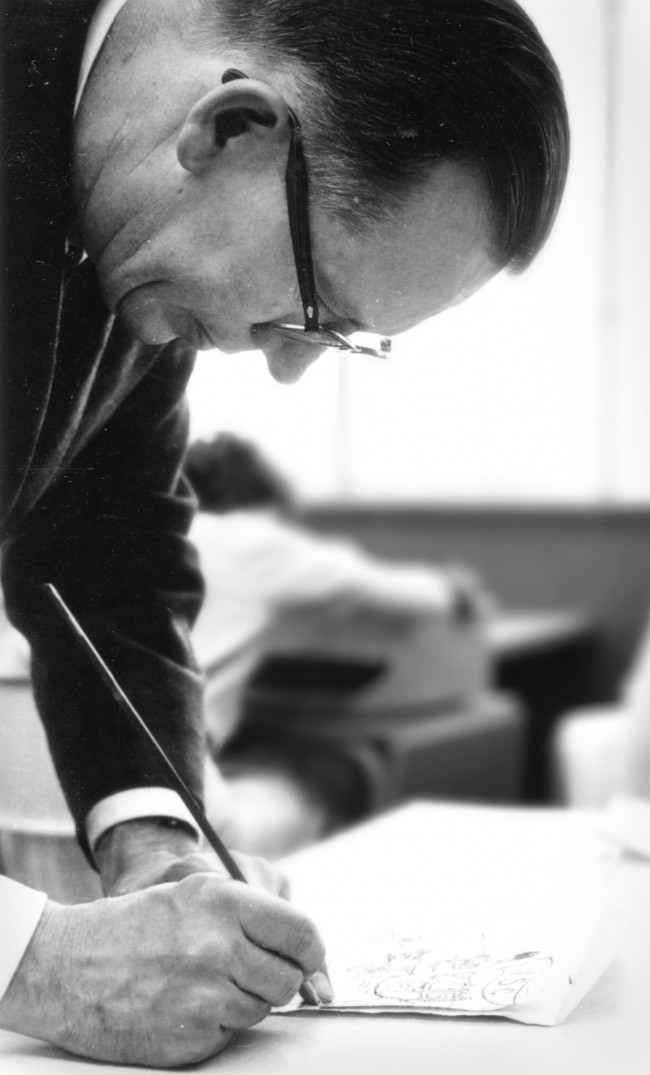 As much as former CSUN journalism professor Dr. DeWayne “Doc” Johnson was known for his high professionalism, work ethic, and advocacy for his students, he was also known for his quick wit, distinctive smirk, and sense of humor.

Johnson was also endowed with the ability to turn around a quick shaggy dog story — joke stories with real groaner punch lines dispensed much to the chagrin of his children.

These traits are among some his family and friends are celebrating this week as they mourn Johnson’s passing at the age of 94.

Described by former students as a tough but fair professor, Johnson, who served as a CSUN professor of journalism and adviser for more than 20 years beginning in 1961, died Dec. 31 at Holy Cross Hospital in Mission Hills.

Colleague Jessica Fish remembers Johnson as a man who was young at heart and a wise contemporary for his ability to appreciate the past yet look forward.

“He was very interested in now,” Fish said. “He was willing to share his memories, but he wasn’t stuck in his memories. He never made it feel like that was a better time than now.”

Arriving at CSUN when it was known as San Fernando Valley State College, Johnson taught mostly writing and reporting journalism courses as the college transitioned to its modern name. Johnson also served as one of the first advisers to the Daily Sundial student newspaper.

“His arrival in 1961 effectively doubled the faculty from one to two,” said Linda Bowen, current CSUN journalism department chair, during a memorial service for Johnson in Northridge on Saturday.

“With the passing of ‘Doc,’ it’s the end of a connection, you might say, for those of us who went there,” said Bob Tarlau, a former student of Johnson’s and editor in chief of the Daily Sundial. “It’s a sad, sentimental, emotional time, because he was the last of the original three.”

His early career included serving in the U.S. Army from 1946 to 1947, as a public information writer.

Johnson’s part-time position at the copy desk allowed him to bring back stories he had worked on to present to his students, Tarlau said. He would use these as examples of what to avoid when writing and reporting.

“I thought those were really, really useful,” Tarlau said. “And he was an interesting guy with a good sense of humor. I got a lot out of his classes.”

Johnson also forayed into the world of broadcast journalism as the host of “Southern Oregon Roundtable” on KBES-TV in Medford, Oregon, and was a radio news editor for United Press International in Los Angeles. He also served as a news editor at KMO radio in Tacoma.

“You knew you were being taught by someone who was practicing the craft at a very high level,” said Bob Rawitch, a former CSUN alum student and L.A. Times colleague of Johnson’s. “And I think that helped to underscore that he knew what he was talking about.”

For Rawitch, Johnson stood out among other professors of his time for his casual attitude, both in and outside of the classroom. Most of his students, Rawitch recalls, were on a first name basis with Johnson, who addressed him by his nickname, “Doc,” alluding to Johnson’s 1955 doctorate in mass communication and education from UCLA — an act most other professors would frown upon.

“Because everybody else was called by their last name. But he was just ‘Doc,’ and it was part of that informality,” Rawtich said. “He had just a very warm relationship with students.”

At the time, CSUN’s journalism department numbered only about 150 people. The Daily Sundial staff, Rawtich recalls, was a very tight-knit group that would occasionally join Johnson and other professors for drinks at the end of the day. As adviser to the student chapter of the Society of Professional Journalists, it was not unheard of for Johnson to host barbecues at his residence.

Johnson’s candor, Rawtich recalls, was “attributed as much to the contact that we had with one another outside the formal classroom setting. We didn’t have the same relationship with the other two [Erlandson and Devol]. Maybe that’s what led to it.”

While Johnson’s career mostly revolved around journalism, he was a painter, too, and was known for painting funny and quirky works of art, recalls his daughter, Christina Johns, in a telephone interview.

“His love of painting is something that I’ve shared,” she said. “He was so prolific. Hundreds and hundreds of paintings that covered every subject possible. He didn’t care what it was.”

Throughout his career — whether it was at the college teaching or at the Los Angeles Times editing — Johnson was selfless and always able to make time for his family and support his children in whatever career path they wished to take.

“That was the main reason he was a good dad,” Johns said. “Of anything we chose to do — whether it’d be acting or singing or painting or acting — he always was there for us. We always felt like he was our best fan.”

Karen J. Fish, another of Johnson’s daughters, recalls her father’s ability to begin conversations with total strangers and talk to them about their life, something she later picked up as an adult.

“He was incredibly supportive and generous, really good at connecting with people and listening to their needs,” said Fish in a telephone interview. “He enjoyed people so much, and he liked to draw people out. Sitting as a child, listening to that, I learned a lot about people from my dad interviewing them on the spot.”

Johns recalls receiving letters from her dad after she went away to college. The letters, she said, were an opportunity to get to know her better than she ever had before.

“They were amusing, yet moving at the same time,” Johns said.

Johnson is survived by his daughters, Fish, Johns, and Janine Johnson, and several grand children, great-grandchildren, and nieces and nephews.