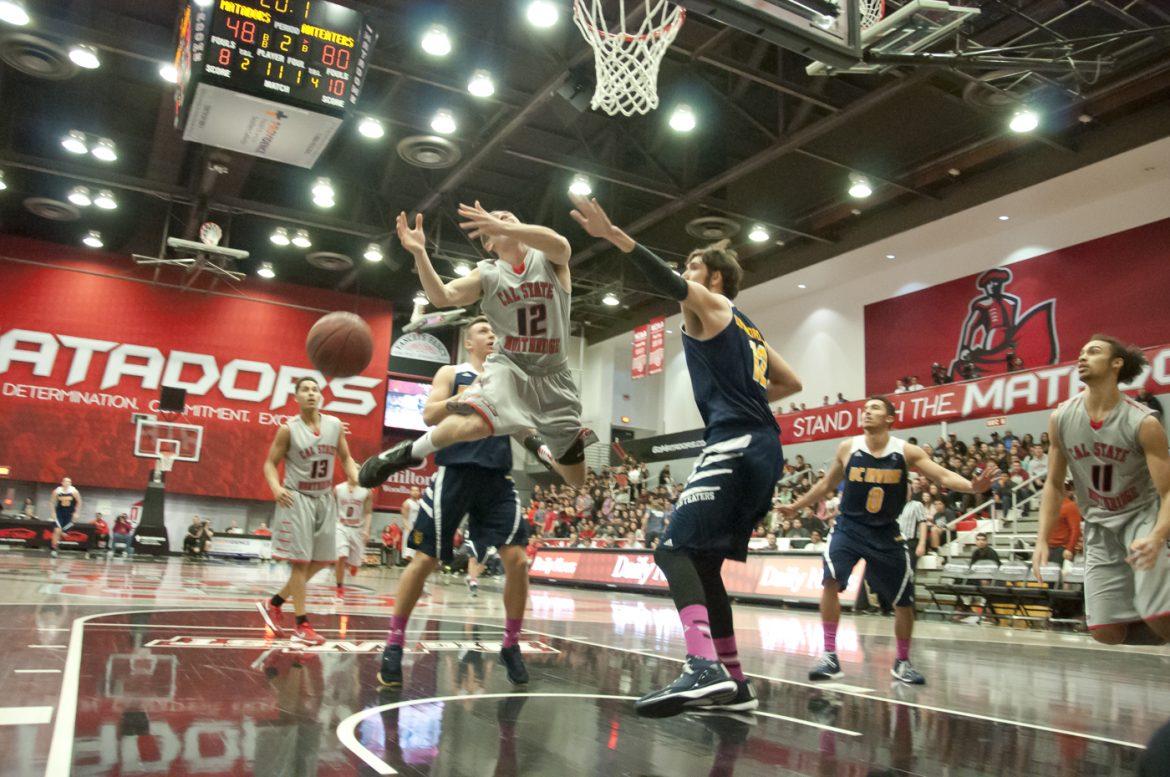 Matadors Robert Cid, Middle, attempts a layup but is fouled by Ioannis Dimakopoulos, second right, from the UC Riverside Anteaters at the Matadome on Thursday, Jan. 22, 2015 in Northridge, Calif. The Matadors suffer a 49 to 80 loss against the Anteaters whom scored an average of 40 points per half. (Photo Credit: David J. Hawkins/Sundial)

For the second straight game, both the Matadors and their opponent had sluggish offensive starts to the game, as both teams combined to shoot 3-15 about five minutes into the game.

Then UC Irvine’s lone senior guard, Travis Souza began his 3-point barrage, as he made his second of five first half 3-pointers to put the Anteaters up by six at the 14:58 mark.

“I thought they played pretty well,” said Theus, in reference to the Anteaters. “They shot the ball and made three 3s early and that broke the game open.”

As Souza and the Anteaters began to get a build a rhythm, the Matadors showed no signs of improvement, as they watched Irvine build an 18-6 lead, nine minutes into the half, despite the absence of Mamadou Ndiaye, Irvine’s 7’6 defensive stalwart.

However, an elbow jumper by senior forward Tre Edmerson-Hale gave CSUN a glimmer of hope, as it sparked a 6-0 run, which cut Irvine’s lead in half, making it 12-18 with 9:37 left in the half.

But just as quickly as they cut into the lead, the Matadors began hemorrhaging points again, as the Anteaters pushed their lead back up to 15 on a Luke Nelson 3–pointer with a little over six minutes remaining in the half.

The Matadors watch their deficit swell due in large part to senior forward, and leading scorer, Stephen Maxwell’s struggles as well as the Matadors’ slow defensive rotations.

Consequently, the Matadors ended the first half trailing 39-18 after Irvine finished the half on a 21-6 run, highlighted by two Souza 3-pointers in the last two minutes.

Following an abysmal first half, the second half started off auspiciously for the Matadors after Hale-Edmerson stole the ball on the first possession of the half and punctuated it with a two-handed dunk on the other end of the floor.

In spite of Hale-Edmerson’s dunk, the Matadors once again found themselves on their heels, as Irvine turned up the pressure and stifled the Matadors, resulting in a 9-0 run to stretch CSUN’s deficit to 28 points.

After that initial run, it was all UC Irvine. CSUN spent the rest of the half fighting an uphill battle, as they never came within 23 points and trailed by as many as 36 points, despite 16 second-half points by sophomore guard Aaron Parks.

“I just tried to be aggressive,” Parks said. “Even though they packed in I still tried to find my shots.”

Although Parks provided a bright spot, the Matadors collectively, were not aggressive and engaged enough to be successful against the Anteaters.

“It’s always tough to lose, but when you play this poorly, at least you know you’re better than that,” said Theus.

CSUN will look to rebound against Long Beach State, in the Matadome at 7 p.m. on Saturday.