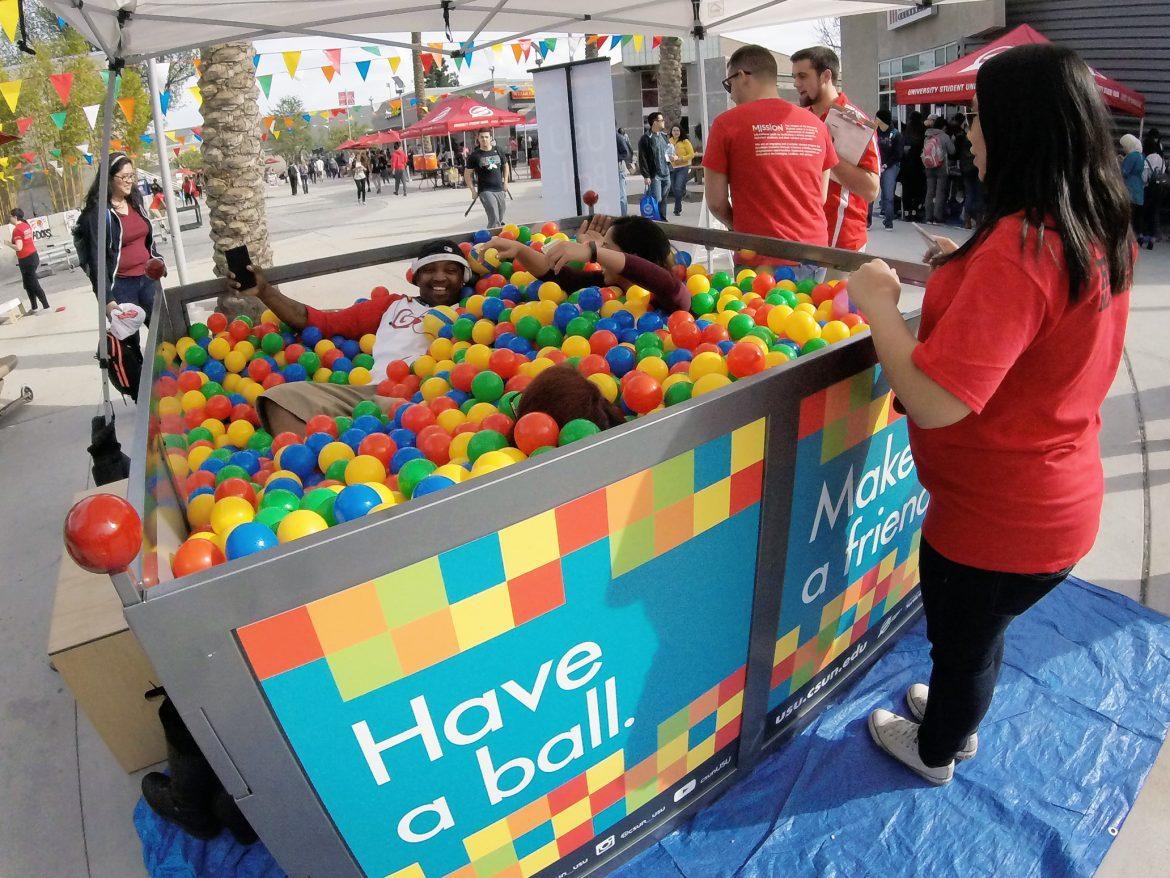 >CORRECTION: An earlier version of this story incorrectly said the event was hosted by Associated Students, rather than the University Student Union.

CSUN’s Spring Kickoff welcomed students to the Spring semester for the fourth year in a row, with music, games and free food at the University Student Union on Thursday

“Spring Kickoff is a way to get the campus excited for the Spring Semester,” said Sarah Shabbar, public relations assistant for the University Student Union Marketing Department.

“It’s a little bit like our welcome back event,” said Shabbar.

Students enjoyed free hot dogs and nachos, giveaways by the University Student Union, and were encouraged by Matty Matador to dress up for photos at a photo booth and take shots at inflatable basketball hoops set up outside the A.S. Ticket Office. Sudents could also paint ceramic bobbleheads at a Crafts booth set up outside the Mercantile Exchange.

There was also a selfie contest involving a ball pit, with the best selfie winning a giveaway package consisting of a CSUN sweater and a basketball, soccer ball, and baseball autographed by the CSUN team members of each respective sport.

“I like that there’s a photo booth,” said Carrillo. “It’s nice that they have lots of events here, fun little things like arts and crafts, free food too.”

Accounting major Jonathan Banks was among those dancing, and won a baseball signed by CSUN’s baseball team for his efforts.

“It was nice to meet the (baseball team),” said Banks while dancing. “(One of the players) gave me the ball as soon as I got up and started dancing.”

This was Banks’ first Kickoff, due to his classes taking place when events held in the past occurred.

“We’re close to meeting that number, if not exceeding it,” said Cole, giving an estimate of 800 to 1,000 students for this year’s Kickoff.

According to Cole, planning for the Kickoff took place in November. Setup took from 8 a.m. to 11 a.m. before the event.

This is the fourth time CSUN has held a Spring Kickoff event, with the first one in 2011.

“We’re trying to give back to the students,” said Cole.