From Words to Moving Pictures 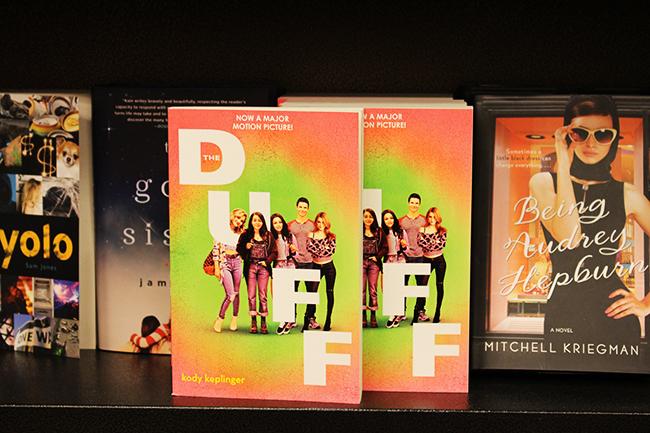 For all of your high school drama needs with cliques and popularity, check out "The Duff" coming out on Feb. 20. (Jessica Castellanos / Assistant Lifestyle Editor)

Every year, fanboys and girls must clear their head cannon visions in exchange for big screen adaptations. Tinseltown is turning to literature once again to fuel 2015 film goers. This includes the much anticipated, and even cringe worthy fan favorites.

“The Last Apprentice” by Joseph Delaney – The movie version will be retitled to “The Seventh Son.” The premise involves a young man training to become an exorcist with the help of a “Spook”. While this is a widely popular book, the movie’s early reviews don’t live up to the same hype. For curious Spook enthusiasts, the movie hits the big screen February 6.

“The Duff, (Designated Fat Ugly Friend)” by Kody Keplinger – Mae Whitman stars as Bianca, aka the Duff. The cliched plot has underdog Bianca falling in love with the ever so popular Wesley. The generic movie will undoubtedly attract it’s already built in audience on February 20.

“A Thousand Splendid Suns” by Khaled Hosseini – This book comes from the acclaimed author of “The Kite Runner”. The novel spent 103 weeks on the New York Times Best Seller list. Now its getting a big screen adaption. The story is set in Afghanistan, over thirty years. The story chronicles a blossoming friendship between Mariam and Laila, set against a war torn nation. The film will debut later this year.

“The Hunger Games: Mockingjay, Part 2” by Suzanne Collins – The continuation of last year’s release will be the final installment in the Hunger Games series. Jennifer Lawrence will reprise her role as Katniss Everdeen one last time. The much anticipated finale will be released November 20.

“Pride and Prejudice and Zombies” by Jane Austen and Seth Grahame-Smith – The beloved classic meets flesh eating undead will star Lily James. The film will retain the original story but will have the characters fighting zombies. The exact release date has yet to be set.

“Insurgent” by Veronica Roth – The second part of the Divergent series continues the story of Tris. She is on the run with Four trying fight against a totalitarian society. Shailene Woodley stars once again. The movie will premiere March 20.

This is just the tip of the iceberg. There is a smorgasbord of books being converted to films this year. Some may fear what will become of their beloved characters. Other fans hold faith that the movie version will get it just right. After all, there have been some great adaptations like The Harry Potter Series or The Lord of The Rings. Then we try to erase horrible book to movies like The Cat in the Hat and even worse the entire Twilight Series. Nonetheless, the movies mentioned above are yet to be released. Until that time will fans everywhere will experience characters come to life.