The Patriot Way: Advantageous or Scandalous? 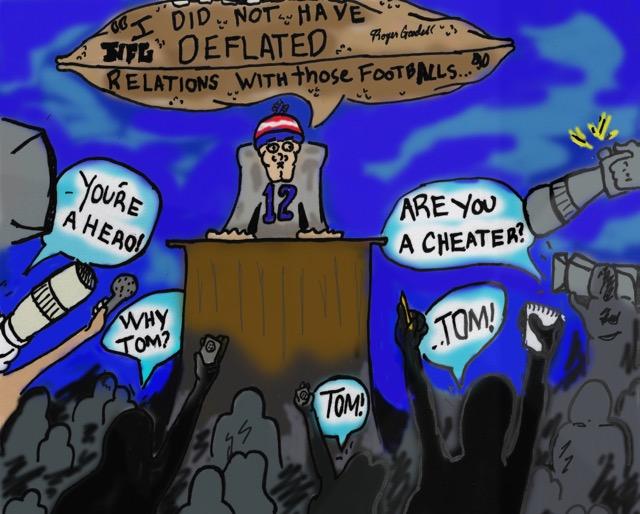 Column and illustration by Thomas Gallegos

Thanks to Tom Brady, Bill Belichick and the New England Patriots, sports headlines were predictable and up for grabs this week.

“NFL Squeezes Patriots Balls” via NY Post and “Ballbuster” via Daily News are two of my favorites, but just a small sample size of the media’s use of Tom Brady’s “balls” within their headlines.

The nation as a whole has been infatuated with Tom Brady’s 12 footballs, 11 of which were under inflated for the first half of the AFC Championship game against the Colts.

A game that ended 45-7 in New England’s favor, with 28 Patriot points scored in the second half. Deflated balls or not, this was no contest and the better team did win.

But, controversy arose following a series of tweets from Chris Mortenson of ESPN hours after the game. The NFL was investigating the Patriots for using underinflated footballs during the dominating win. Sports fans collectively gasped and cried “cheater,” directing hate and speculation toward the Patriots, Belichick and Brady.

For an organization already having “Spygate” on its resume, it’s obvious to see why the majority of the nation, excluding New England, has already convicted the Patriots, in the court of public opinion, as cheaters.

Calling the Patriots cheaters might be a bit of a stretch, but undermining the rules is no doubt a form of cheating, no?

The league allows quarterback to choose 12 footballs before every game, with the proper psi varying between 12.5-13.5. Brady likes his football underinflated, right at the lowest regulation size 12.5 psi.

So now the question becomes how did Brady get 11 footballs to start the game all under 12.5 psi?

The game footballs are selected by the teams, and checked by the referees before warm ups, then given to the teams on field staff. There is a small window of time for say a ball boy or assistant to let out a little air, after the ref check and before warm-ups.

Brunell would later continue on ESPN adamantly stating the advantages of having a deflated football, benefiting the quarterbacks grip, the running backs hold of the ball, and the receivers ability to snag it with more ease.

Okay, lets say Brady did ask his ball boys to deflate the balls just a tad, testing the refs and also looking for a slight edge. That is cheating, no way around it. It is important to remember though that they were caught during a halftime check, and in the second half the proper air was filled into them.

So now our focus has been on the proper psi a football needs and not the discussion of what looks to be an awesome Super Bowl matchup.

A game riddled with story lines, which features the two top-seeded playoff teams, a defending champion, and a coach/quarterback tandem that is competing in its record sixth Super Bowl appearance together, has been unfortunately overshadowed by the the talk of deflated footballs.

So, I ask you again: are the Patriots advantageous or scandalous when it comes to gamesmanship and the integrity of the game?

Why not both? For Belichick and the New England Patriots, a flurry of advantageous moves on and off the football field has led to one of the greatest runs in pro-sports history, but at the same time, a run riddled with controversy and scandal, where any edge which tip toes the bounds of right or wrong, is worth it.