AS approves funding for Farmer’s Market 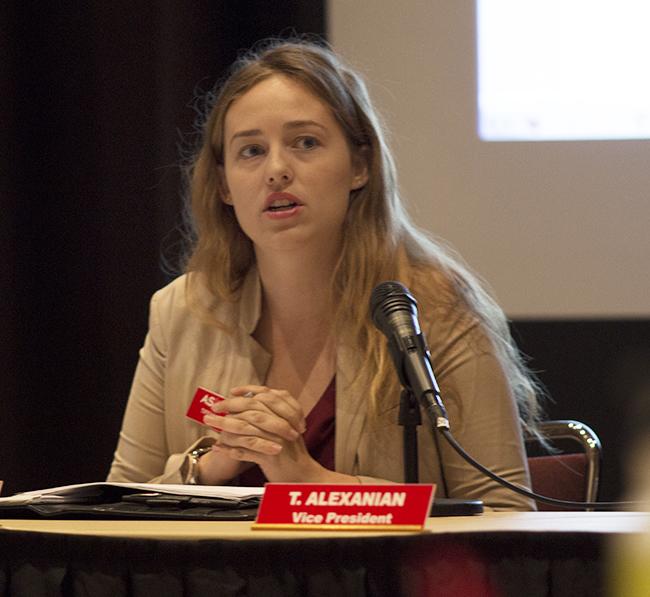 In a unanimous vote, Associated Students (AS) approved a request to budget $33,100 for the school’s first on-campus Farmer’s Market for the spring 2015 semester in hopes of increasing sustainability.

The original estimated cost for the farmer’s market was around $45,000 to $50,000. However after several meetings with campus partners and AS the cost was readjusted.

“When the idea was proposed we didn’t think it would cost this much, or even have a cost. We were surprised to see the expected cost once it was introduced,” Tiffany Zaich, AS president said. “However, I believe it is for a good purpose that benefits the students.”

This cost includes a onetime fee of purchasing bicycle barricades, items for the opening ceremony and flyers for marketing. Semester costs include paying police officers and student assistants. The school is not paying the vendors or for permits.

Raw Inspirations, who runs over 40 local farmers markets, will be the sole supporter for bringing in vendors onto campus and responsible for vendor permits. More than half of the budget will be used to pay four parking officers to patrol the area and regulate traffic before, during and after the market.

“Since the market will be on the street the university noted that police officers be on site throughout majority of the day,” said Zaich, “we will pay anything if it ensures the safety of the students.”

The university will also be paying student assistants to help load in and load out the bicycle barricades. The barricades are used a safety measure for the vendors.

According to AS Controller Diane Hartjen, the barricades will be budgeted from Capital Improvement while the pay for officers, students and marketing is budgeted from Unassigned Contingency.

“Capital Improvement is used for tangible items that the university can use continuously for years,” Hartjen said.

The school will not make revenue from operating this farmer’s market. The main benefit of the market is to increase sustainability on campus and provide students with local healthy eating positions that other campus dinning doesn’t provide. The idea of a farmers market on campus was proposed over six years ago but it wasn’t until three years ago the idea of reintroduced and approved.

During an AS senate meeting senators stressed how important it is to have healthy, sustainable, organic and vegan eating options for students.

“President Harrison is in favor for sustainability so that helped a lot when getting it approved,” said Zaich.

The farmer’s market will be every Tuesday from 10-2 p.m. starting February 2nd. If the school was to add more days or increase the times the budget would then increase in order to help pay more officers and student assistants. Zaich noted that the budget is subjected to change each semester depending if there needs to be an increase or decrease in hired help.

There will be a total of 47 vendors; 44 produce vendors and three craft vendors. The market will have a wide range of food such as bread, cheese, fruits, coffee, flowers, vegan and gluten free options as well as hot prepared food. The craft vendors will organic and handmade soaps, lotion and jewelry.