The road to Super Bowl XLIX 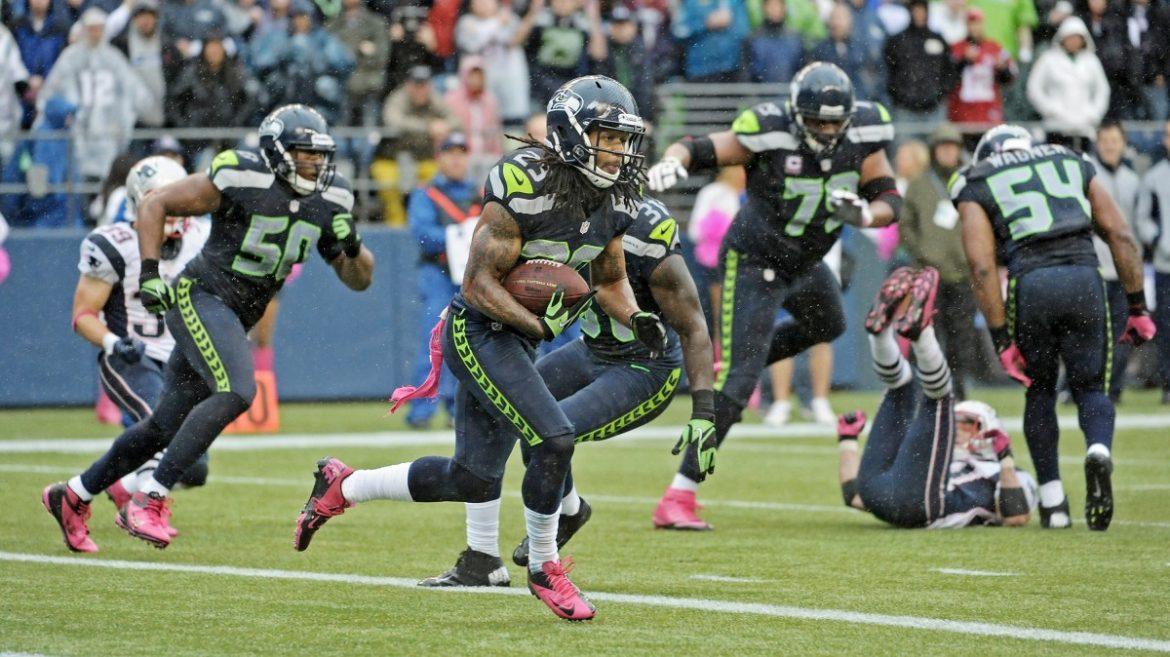 First of all, this whole “Deflate-Gate” thing is ridiculous and it’s ruining Super bowl week because nobody is talking about the actual game! Who would have thought this would have been a lead story on CNN? Unbelievable. The media needs to move on because it’s a non-story. What a game this is going to be, as we got the Pats offense vs the Seahawks defense. A matchup doesn’t get much better than this. I know defense wins championships, but it’s hard for me to pick against Tom Brady and Bill Belichick. The only time you take against these two guys is when they’re playing Eli Manning and the Giants. I actually think this whole deflated ball scandal is going to motivate the Patriots even more because they will have a “us against the world” mentality and will want to prove that they don’t need to cheat to win games. So don’t be surprised if the Patriots blow the Seahawks out of the water, but I don’t think that will happen. Nor do us fans deserve for that to happen after last years pathetic Super Bowl. I expect both offenses to struggle to put points on the board, but I trust in Tom Brady to make a few more plays than Russell Wilson. Only way Seahawks win if Lynch goes off for 150 yards plus and I’m not sure that will happen because Patriots will stack the box and let Wilson try and beat them. So I’ll go with Patriots over Seahawks 20-17. Super Bowl MVP: Tom Brady

There are many
storylines to watch for Super Bowl XLIX such as Deflate gate,
guaranteed future Hall of Famer Tom Brady vs. the young emerging
Russell Wilson, Bill Belichick vs. Pete Carroll and my personal
favorite Darrelle Revis vs. Richard Sherman in the battle of bragging
rights for the title No. 1 cornerback in the NFL. Fans have a lot to be
excited about and much more to look forward to as Sunday
continues to inch closer. Taking all of the advanced statistics and my
immense hatred for both teams out of the equation, this is going to be
a phenomenal game against two of the most complete teams in the NFL
who just happen to be the last two standing. Both teams have very
stingy defenses though I give Seattle the slight advantage, as well as
both teams having a productive offense which is a slight advantage for
the Patriots. Seattle has many players they will have to make tough
decisions on, whether to keep or let walk due to the amount of money
some of them will command in free agency. The Patriots have those same
issues with some key players on the roster as well, not to mention
Brady’s is inching towards age 40 sooner rather than later; we see how
quick Peyton Manning’s age showed this postseason. These two teams each
have the motivation to win Sunday
because this could be their last chances due to roster changes in the
foreseeable future. Peyton Manning had what I suspected was his last
shot at another Super Bowl ring last year and I feel the same applies
for Tom Brady this year. As a New York Jets fan I cannot believe I am
about to say these words but I think the Patriots will beat the Seahawks
garnering Tom Brady a 4th Super Bowl ring. The Patriots will play like
the more desperate and hungry team with much to prove. Their defense
has been the backbone of their team this year, reminiscent of Tom
Brady’s previous Super Bowl winning teams and that will be the
difference.. Win or lose, just like Peyton Manning, Brady will have
potentially his final opportunity.

My precious Green Bay Packers lost to the Seattle Seahawks in the beginning of our season, and, sadly, at the end of our season. The Cheeseheads came out on top against the New England Patriots in the regular season, making the Packers the NFL’s No. 1 team in the league at the time. So, ipso facto, the Seahawks will beat the Patriots twice over. Right? Yes and let’s be real here. The Seahawks have already established that defense wins championships, and, after losing $20 in last year’s championship game, I’m a firm believer in Seattle overcoming the Patriots. Russell Wilson and company have already defeated the giant that was Peyton Manning in last year’s Super Bowl game, and have gone 9-0 against veteran-quarterback, proving themselves as veteran killers time and time again. The Seahawks are hungry to become world champions again, and to topple the Patriots and become the first back-to-back Super Bowl champions since their current opponents back in 2002 will only boost their motivation. Although it won’t be a thorough trashing like it was last year, Seattle will start of with a comfortable 21-0 lead, before teasing the Patriots for a potential comeback, only to shatter their dreams with a lowly field goal. Marshawn Lynch will be forced to talk to the media in the post-game conference because he’ll deservedly earn the MVP award. You heard it here first.

Russell Wilson will always be questioned as an elite quarterback due to his great defense and All-Pro running back Marshawn Lynch. Beating Tom Brady would not only improve his undefeated record against elite quarterbacks, which includes Brady, but it would transform his reputation from a game manager to a game dictator, like Ben Roethlisberger after his second Super Bowl win. Wilson is clearly not on the level of Andrew Luck, so this game is far more important to his legacy than Brady and company. Brady already has more Super Bowl Appearances than any quarterback in NFL history, but Wilson’s pocket presence, and most importantly his mobility, will be the deciding factor in the fourth quarter, where the Seahawks’ unheralded offense seems to keep doing the impossible. Luke Willson could become a star on the biggest of stages as the former Rice Owl averages 15.1 yards per catch for his career as well as being the go-to receiver in the red zone. Former Seahawks cornerback Brandon Browner could very well take the wind out of his former teams sails as he knows the defensive tendencies of the Legion of Boom and how to frustrate Seahawk receivers Doug Baldwin and Jermaine Kearse. Expect a hellacious final quarter with whomever in possession of the ball in the final three minutes to steal away the ultimate glory. Seahawks deflate the Patriots title hopes at the gates with a 31-28 victory.