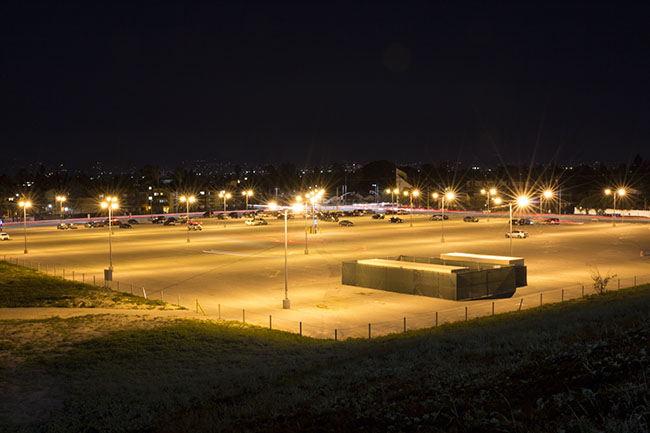 Students can pay for half the price to park in the F10 lot, located at Lindley Avenue and Lassen Street. The lot has 900 spaces, according to Larry Isrow, parking and transportation services manager. (Trevor Stamp / Multimedia Editor)

Students received an email in the winter from parking services announcing that, as of the Spring 2015 semester, the North Campus permit, also known as lot F10, will be offered at $180 per academic year, or $90 per semester.

The F10 lot, located at Lindley Avenue and Lassen Street, sits at the northernmost point of campus, with a shuttle that stops by periodically.

“F10 is an underutilized parking lot,” said Larry Isrow, parking and transportation services manager. “We have 900 spaces in that lot, and very little usage. So we’re trying to encourage students, faculty and staff to use that lot so they don’t have to hunt for space.”

The responses to this price change are mixed. While the North Campus permit is discounted, all other permits still remain at full price.

Some students, like senior CIT major Tuesy Phung, said she feels the price was justified.

“The lot is pretty far from campus,” Phung said. “There is no way you should charge full price for that.”

The general consensus is that students feel the discount is pointless, because it is too far from the actual campus. Issues like those are the exact reasons why the discount took place.

“It makes sense to me that rather than spending 30-40 minutes looking for parking, you could go straight to F10 and walk down to campus,” Isrow said. “The shuttle takes you from F10 to the south side of Redwood Hall, which is a great location. Close to everything, prevents street and parking garage congestion, and encourages a little exercise.”

Another incentive for the permit is to fully reimburse those who paid for a standard $360 permit for the full academic year if they switch to the North Campus permit.

“We had a definite boost in the purchases of [the North Campus permit] this year compared to last year,” Isrow said.

Not all students are thrilled with the idea of extra walking or the housing tram.

“I just like the idea of having more options, more parking lots to park in,” said Lionel Vivar, a senior CTVA Major. “I would rather have more control over where I park than take the tram or walk.”

Many students also express hope that a discount will be placed on more lots in the future. Others, such as sophomore Myunique Slider, believe discounts should be placed on particular groups, such as commuters.

“If anything, there should be discounts for seniors, or anyone with a good academic record,” Vivar said. “It could provide another perk for those who work harder.”

Isrow is less open to the option of giving away discounts for permits and the other lots.

“We take bonds to pay for the structures. It’s like a mortgage. Lowering the parking rate for all lots is something that might not happen in the immediate future.”

Isrow’s decision was based on the apparent underutilization of lot F10 and he said that if it was used, it can help ease the parking struggle on campus.