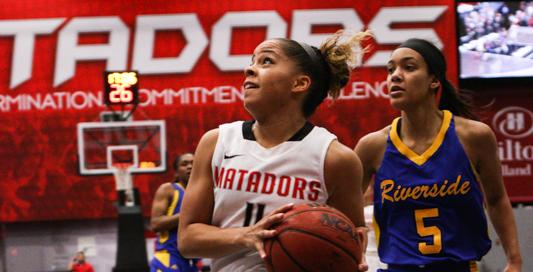 The CSUN Matadors remain tied for fifth place in the Big West Conference with the University of California, Riverside Roadrunners, after suffering a 68-56 loss against the Highlanders Thursday night at the Matadome.

This defeat is a change for the Matadors, who delivered the first loss in nearly two months to the first place conference team Long Beach State 67-52 just last week.

“I thought we were terrible from the beginning,” CSUN head coach Jason Flowers said. “We were bad.”

Riverside took the first point of the game, but CSUN fired back against the Highlanders and swapped the lead for the first 10 minutes of the opening half.

Around 13:00 minutes, CSUN secured a lead that would last until Riverside started what would become a 10-point run with six minutes to go before halftime.

It went further downhill for CSUN in the second half, as the Highlanders held onto the high ground and never dropped their lead.

“They wanted to win more than we did tonight,” Flowers said.

CSUN managed to stay close to Riverside through most of the half but struggled to climb out of the deficit accumulated earlier in the game. They ended the game 15 points behind Riverside.

“We didn’t play with urgency at the beginning and we just need to do better,” said CSUN senior guard Ashlee Guay, who put in 15 points for the Matadors.

CSUN just couldn’t seem to get the ball in the basket, shooting 32.3 percent for the game. Senior guards Guay, Janae Sharpe and Cinnamon Lister secured the bulk of the points for their team, but Riverside managed to share the ball better with its all-guard starting lineup.

The Highlanders didn’t shoot exceptionally better than CSUN either, but at 41.3 percent for the game, it was enough to capture the lead.

CSUN will face off against the University of Hawai’i for the second time this season Jan. 31.

The Matadors defeated the Rainbow Wahine 53-46 January 10 in their second conference game of the season. Hawai’i is ranked above CSUN at third place in the Big West as of Jan. 29.

“We need to work on our energy and coming out ready to play,” said Guay.