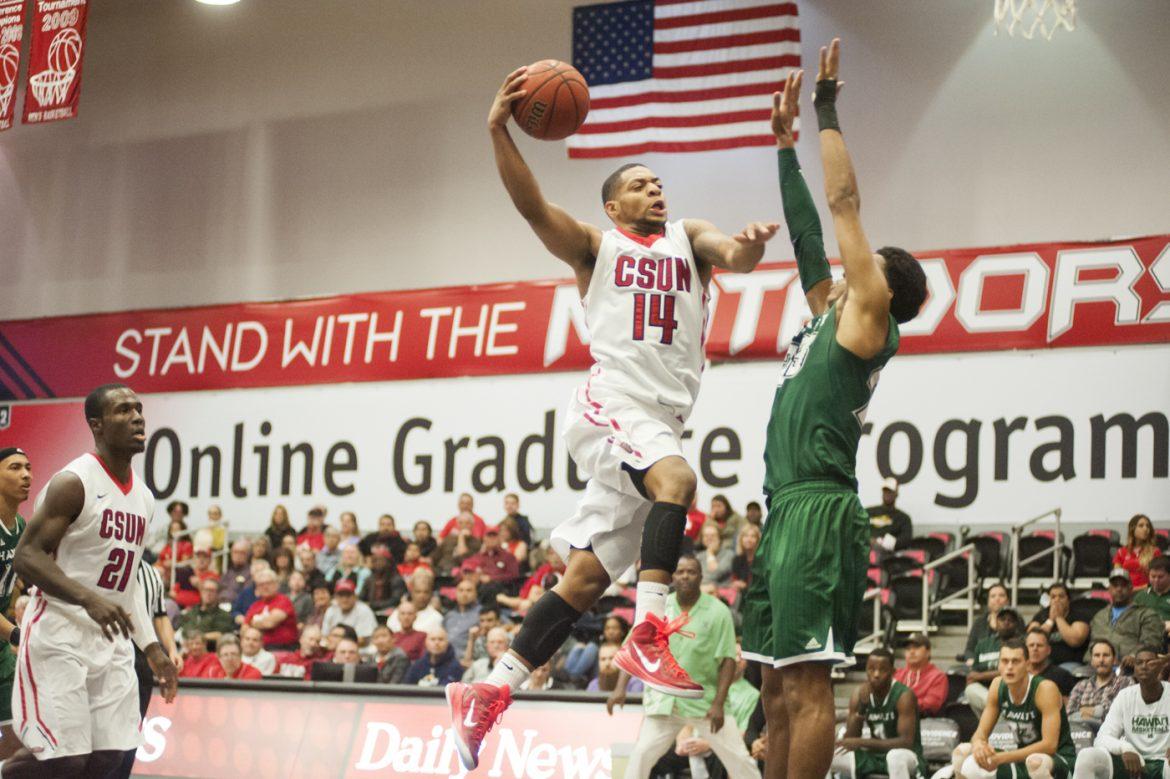 Unlike the previous three games in this four game home stand, the Matadors did not have difficulty scoring early on. However, it was their inability to keep tabs on the Rainbow Warriors on defense that hampered their chances early.

The Warriors continued to push the tempo, as they increased their lead to 25-15 with 9:02 left in the half. Nevertheless, the Matadors responded to the Warriors’ insistence on pushing the tempo by getting their front court players involved and attacking the paint.

“The thing is that if they’re playing small, and we have a larger team,” Theus said. “Hopefully you impose your will by taking them down low and beating them up around the basket.”

CSUN’s counter proved to be an effective one, as senior forward Stephen Maxwell was able to convert a pair of layups during a 10-2 Matadors’ run that brought the score to 25-27 at the 7:13 mark in the half.

But just as the Matadors were climbing back into the ballgame, Hawaii wore down the Matadors and scored 12 unanswered points in the following four minutes and 11 seconds.

“It’s tough to fight back,” said junior point guard, Landon Drew. “Especially when we only have eight or nine guys.”

“They definitely controlled the tempo, or tried controlling the tempo, by pushing the ball,” said Drew. “First half we weren’t really getting back on transition defense.”

Despite significant first half performances from Maxwell (11 points, 6 rebounds) and sophomore guard Aaron Parks (9 points on 3-5 shooting), CSUN could not keep pace with Hawaii, as they ended the first half trailing, 34-50.

The opening minutes of the second half mirrored the majority of the first, as every basket the Matadors made was responded with a Warriors’ make seconds later.

It wasn’t until the Matadors began to dig in on defense and slow the game down that they came within striking distance of the Warriors.

As a result of the subdued pace, the Matadors were once again able to take advantage of their aggressiveness inside, as they went on a 16-6 run, highlighted by free throws from Maxwell, Parks, and senior forward, Devonte Elliott.

After cutting it to a 52-58 deficit with 12:16 left, a missed layup and a pair of missed free throws by Maxwell combined with a technical foul by junior forward Tre Hale-Edmerson, diminished the brunt of CSUN’s momentum and allowed Hawaii to push the lead back up to double figures.

“That’s a momentum killer,” Theus said, referring to the Hale-Edmerson technical . “That’s what those are. That’s what happens you’re struggling, things like that happen.”

Once the Warriors rebuilt that cushion, fatigue started to set in for the shorthanded Matadors, as they couldn’t match the speed and intensity Hawaii brought for the rest of the game.

“Emotionally I struggle, because I know that they’re struggling,” Theus said, referring to late-game fatigue brought by a lack of depth because of an ongoing academic investigation. “I feel for them, because these guys really don’t deserve this situation.”

The Matadors will travel to Davis to face the UC Davis Aggies next Thursday, hoping to snap their three-game losing streak.