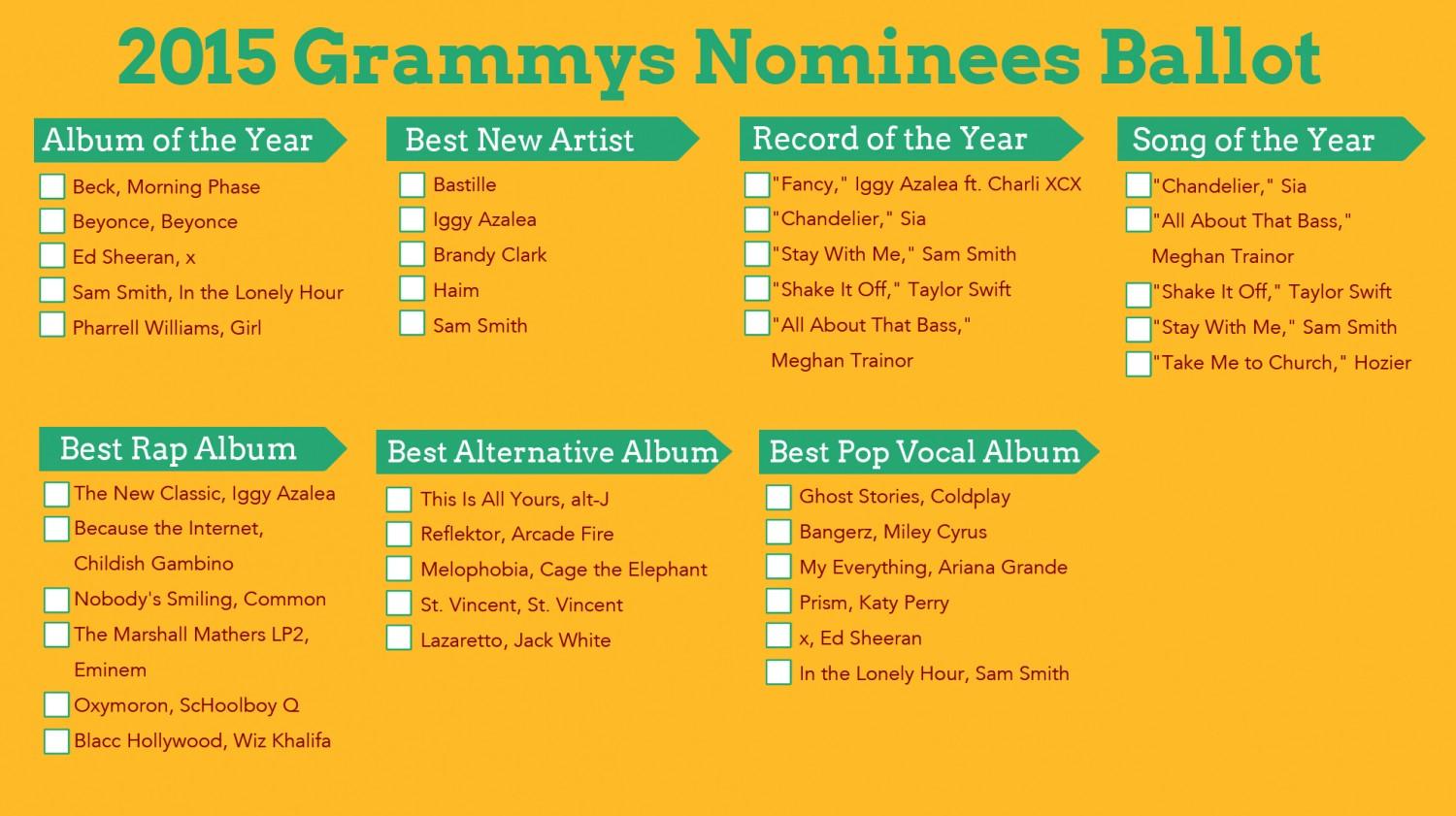 This year’s Grammy Awards are just a week away, and regardless of who wins their very own golden gramophone, the awards will solidify the careers of many musical acts and artists. 2015’s nominees are all over the place when it comes to genres within categories.

You can already predict that artists like Taylor Swift and Beyoncé, will take home a few awards, but do you think anyone will show them up this year? British singer -songwriter Sam Smith, made a huge splash in the musical world last year with his pop meets soul sound, and has now found himself with six nominations, including Album of the Year.

Also nominated in the same category is Beck, who has been around longer than anyone else nominated in the category, well, except for Pharrell Williams, perhaps. The rest of the nominees include Ed Sheeran with “X” and Beyoncé with her self-titled that took the entire world by storm when she made a surprise release.

It may be impossible to count how many times you heard “Drunk in Love” during 2013 and 2014. It is hard to say who will take home the Grammy in this category. It will most likely be anyone but Beck, to be frank. His record “Morning Phase” was another beautiful record, and similar to “Sea Change” in its slow dreaminess. But the National Academy of Recording Arts and Sciences will probably hand the award to someone with a little more appeal to the general public.

Sam Smith, Iggy Azalea, Bastille and Brandy Clark are nominated for Best New Artist, but hopefully the Grammy goes home with San Fernando Valley natives Haim. The trio captured the hearts of nearly everyone in the music industry when they came out with their single “Forever” in 2012. They released a full length LP “Days Are Gone” in 2013, and have been playing an unbelievable amount of festivals and shows ever since, and are now recording their next record.

The Grammy for Record of the Year is another toss-up, with nearly every song in the category being unbelievably popular. Taylor Swift’s “Shake It Off” became an anthem of 2014, while the dramatic Sia broke out of the indie-sphere and made headlines with her song “Chandelier.” If you turned on the radio in 2014 you probably heard “All About That Bass” by Meghan Trainor 100 times per day, and also heard “Fancy” by Iggy Azalea featuring Charli XCX just as many times.

As far as rock and alternative music goes at the Grammys this year, previously unrecognized artists who have had lengthy careers, such as Arctic Monkeys and St. Vincent, are finally having their mainstream moment. 2011 Album of the Year winners, Arcade Fire, are nominated for Best Alternative Music Album this year, for their 2013 monumental release “Reflektor.” Best Rock Song should definitely go to Jack White for “Lazaretto,” the first single from his recent solo release. The ripping guitar-filled track is total proof that White is a true rock and roller, and is worthy of a Grammy.

The Grammys will most likely be handed out to the most predictable acts, but there’s always room for a surprise, one cannot forget when Arcade Fire took home the Album of the Year award for “The Suburbs” back in 2011.