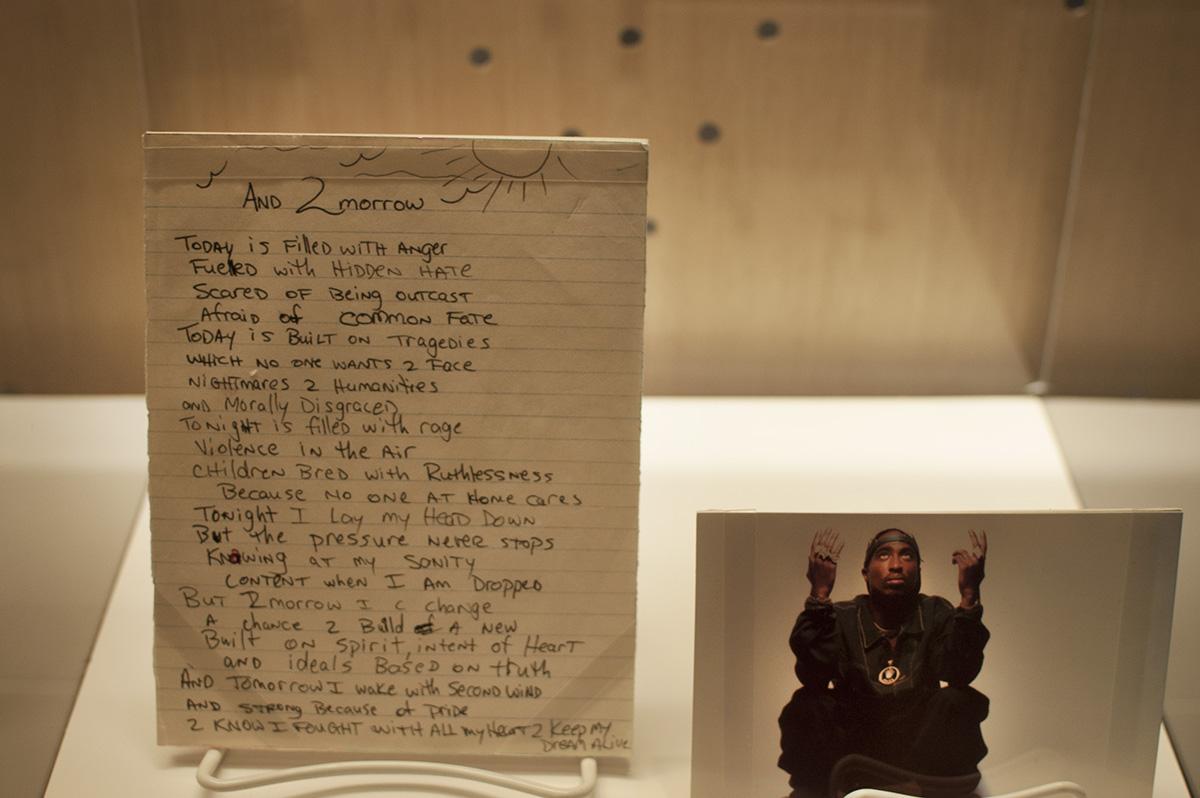 The new exhibit at the Grammy Museum features a handwritten poem "And 2morrow" by Tupac Shakur with iconic pictures of the rapper on Monday, February 2. (Brooke Holland / Staff Reporter)

Music fans interested in seeing the Versace suit Tupac Shakur wore to the 1996 Grammy awards, or view the handwritten notes from his post-prison studio session, will get the chance at the new exhibit dedicated to his legacy.

I had the chance to check out “All Eyez on Me: The Writings of Tupac Shakur” at the Grammy Museum, and enjoyed learning about the west coast rapper’s love of words and musical talent.

Among the items featured are handwritten notes, poems and lyrics. Looking at Shakur’s heartfelt poetry gives a deeper meaning to his song lyrics.

Scribbled in blue ink on a piece of notebook paper, he wrote, “I cannot bear captivity/4 I would rather be stricken blind/Than 2 live without expression of mind.” This poem showed the inside of Shakur’s beautiful poetic mind.

The honesty in his poetry is genius, and something that most rappers crave.

Many exhibit observers agree the poetry displays are worth the $11.95 college discount price.

“I personally like his writings and his poetry. It’s unreal to see, and totally worth the experience,” said Janis Lara, 22.

Books and artifacts that influenced Shakur, along with the rapper’s memorabilia are on display for visitors. It’s incredible to see how much he documented during his life. His ambitions as a writer have finally got him the recognition he deserves.

It traces the singer-songwriter’s exceptional rise to the top through the use of iconic photographs, high fashion clothing, music videos and interview footage.

The exhibit examines both his solo career and his work with the hip-hop collective, Digital Underground. It also emphasizes his inspirations, compelling personality, acting career, screenwriting talents and outspoken social activist attitude.

Fans can jam out to Shakur’s music videos and watch rare MTV interviews. Don’t forget to check out the listening booth and watch a clip from “Thug Angel.” The 1988 interview shows Shakur’s thoughts about life, gangs, sex and the art of rap when he was 17 years old.

All the items were supplied by Shakur’s estate and overseen by his mother, Afeni Shakur.

The exhibit is a wonderful decision for music fans that want a up close and personal look at Shakur’s life. Viewers can make connections between his feelings and music.

Shakur is recognized as one of the most influential and best-selling rapper’s who ever lived. Rolling Stone has listed him in their “Top 100 Greatest Artists of All Time.” This is one experience that fans won’t forget.

Unfortunately, the 25-year-old never won a Grammy Award, but he was nominated seven times.

Access to the entire museum is included with the purchase of a ticket. Located steps away from the Staples Center, the exhibit will run until Wednesday, April 22. The student discount is only with a valid form of identifcation.