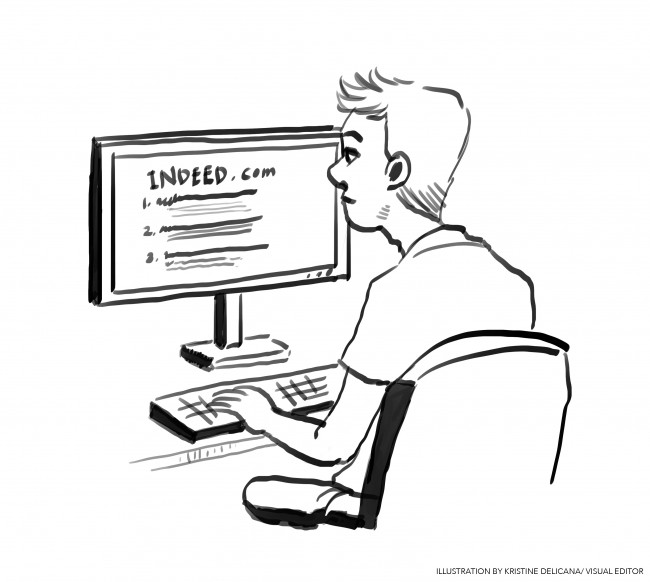 Scrolling through indeed.com, an online job search engine, over 14,967 new jobs are available in the Los Angeles county. Craigslist has more than 11,939 pages of job advertisements for the L.A. area.

Good news for people looking for a job.

However, the population of L.A. is huge, with more than three million people living here. The L.A. Times reports about 316,000 people filed for first-time unemployment benefits in January 2015. The Los Angeles County’s unemployment rate remained at 8.1 percent in August, according to the L.A. Times. Do the math.

The reports about high unemployment rate is no secret. The Great Recession left more than 8.8 million Americans without jobs, according to the Bureau of Labor Statistics.

The Recession left our country jobless, anxious and on ice.

Plus, as a millennial, thinking about the competitive job market makes me sweat like a pig. Ew.

However, job recovery is real.

Yes, there is hope for the economy.

After the generally good news in the Bureau’s jobs report, it’s possible that 2015 is the next job boom.

The report states that job growth in November was strong and the economy has now added more jobs in 2014 than in any full calendar year, since the late 1990s.

Hooray–a glimpse of hope for the economy.

Workers across the nation were hit hard during the recession. Especially those with jobs paying between $14 and $21 an hour.

“Over the past three months, the economy has created an average of 289k per month. That’s the healthiest pace [in] basically forever,” Justin Wolfers, an economist, tweeted.

The labor market is one step closer to full health.

As college seniors across the country prepare to graduate this spring, a looming freedom rises the familiar worry: Will I get a job?

Millions of fresh-faced college graduates will take their diplomas and head out into the real world.

After all, the ticket to a good job is a college degree, right?

According to findings from Michigan State University’s College Employment Research Institute Recruiting Trends, the job market for soon-to-be college graduates is booming. It reports that hiring is expected to jump up to 16 percent for new grads.

Keep in mind—the unemployment among 2013 graduates is at 10.9 percent, down from 13 percent for graduates in 2012, reports the U.S. Labor Department.

This percentage will continue to get smaller because the economy is now recovering.

As a college student, these statistics make me hopeful for my job search. Next year the hunt for a big-girl job will begin. A four-year degree from CSUN bears an estimated $22,100 in-state price tag. So, a great job after graduation is high on my to-do list.

Business Insider reports that Austin, Texas will see the most job growth in 2015. Looks like this California girl is moving to Texas. Just kidding.

However, if your resolution for this year is to go out and find your dream job, then get excited because job recovery is in a better direction.