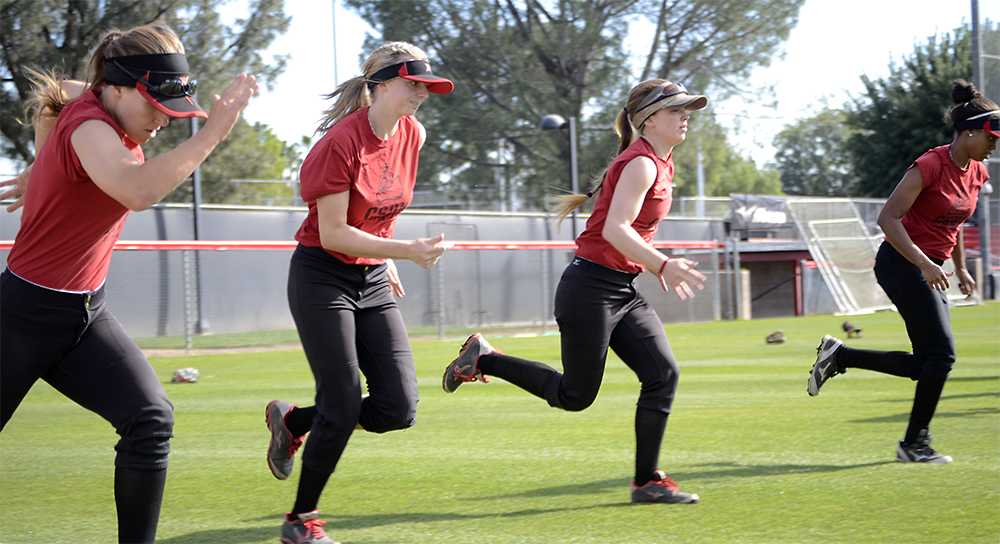 The CSUN women's softball prepare for their opening game this Friday, Feb. 9, 2105 versus Wisconsin in the 2015 Kajikawa Classic at Tempe, Ariz. Photo credit: Raul Martinez

There’s plenty of optimism for the new campaign after a successful 2014 season.

After a 31-26 season, which was good enough for sixth place in the Big West, and fifth best record overall, the Matadors enter the 2015 season ranked sixth in early season Big West polls. The ranking has done little to shake the confidence of fifth year coach, Taira Flower.

“To be honest I don’t put a lot of thought,” said Flowers. “Its disappointing that anyone thinks we’re down that low, but to be honest, you don’t know what will happen during the season and I’m confident in our team.”

The Matadors will employ a bevy of pitching depth, led by fifth year senior pitcher, Brianna Elder, and sophomore pitcher, Daphne Pofek, as one of their greater weapons this season. CSUN will hope to build on last year’s numbers, which were good enough to rank Northridge second place in hits allowed, and team earned run average in the Big West.

New recruits in freshmen Zoe Conley, an ESPN Small High School All-American, and Savannah Horvath, who was National Gatorade Player of the Year and the National Junior Player of the Year, both participated in the USA Softball Junior National team open tryouts and will join CSUN.

“We’ve got speed, we’ve got power, we’ve got people who can play a numerous amount of positions,” said sophomore outfielder Taylor Glover. “If one falls we’ve definitely? got a nice buffer to pick them up. We’ve just got to remember this is CSUN’s game. This is our game.”

Both pitching and batting leaders from the previous season will return in the form of Brianna Elder and Glover.

Elder finished the 2014 season as the Matador’s first pitcher in seven years to win more than 20 games, with a 22-12 record. Glover led CSUN in most offensive categories including hits, stolen bases, home runs and runs batted in. She was also selected to the 2014 National Fast Pitch All-West Region first team, and both were awarded First team All-Big West honors last season. Three Matadors were also awarded honorable mentions.

The Matadors will begin their season participating in the 2015 Kajikawa Classic in Tempe, Ariz. against the Wisconsin Badgers on Feb. 6. The Matador’s home opener will take place against St. John’s University on Feb. 24 before opening conference play against Cal Poly on March 28.

Improvements on defense will have to be made if they hope to succeed in a tough Big West in 2015. The Matadors committed the most errors in the conference last season and sported one of the lower fielding percentages (.956) as well. The Matadors also allowed 34 more passed balls than the next team in their conference.

“Our team model for the year is ‘Get that Mo,’” said Elder. “’Get that Mo,’ stands for get that momentum because in the game of softball one home run, one hit, one error, can change the game and we don’t want that to happen. We want to be in charge. We want to limit mistakes, and capitalize on the other teams mistake.”