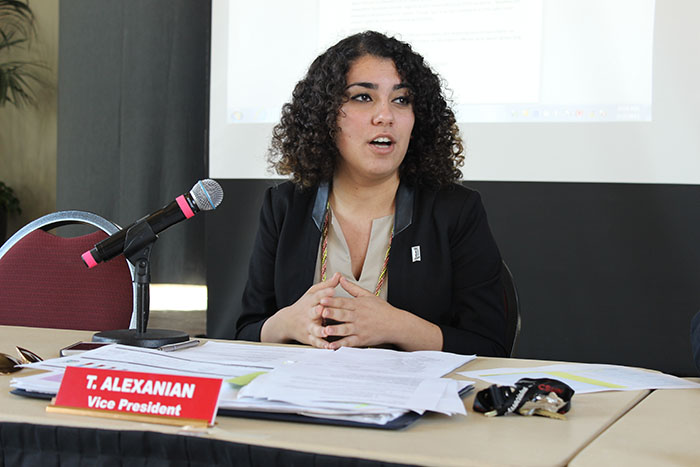 Associated Students vice president Talar Alexanian thanks open forum speakers for participating in the AS senate meeting on Feb. 2. While some orators covered upcoming events like the Swap Out event and Elections Kickoff, others asked for more AS funds in support of their organization. (Wynnona Loredo / Staff Photographer)

In a 10 to 2 vote, Associated Students (AS) approved a new change in the General Election Code, regarding the addition of a financial disclosure statement concerning funding and donations for AS elections.

This new change will go into effect immediately for the upcoming Spring 2015 Associated Students elections. The statement of financial disclosure is the only change in the General Election Code.

Vice President, Talar Alexanian, added a section on donations in order to clarify the process on funding for elections.

“When I was running in the past, other campaigners and I had many questions on funding and donations, so I really hope this new section clears that up for future elections,” said Alexanian.

The change imposes a new way in which funding and donations for elections are handled.

It allows candidates to receive donations outside of their spending cap in order to be used toward campaigns. Students who receive material gifts, not cash, from outside connections and sources are allowed to write off that expenditure as zero dollars; therefore that gift will not be included in their monetary financial disclosure form. For example, if a candidate received a $200 banner from an off campus source for free, it will not affect their spending cap. Anyone who runs is required to fill out a finance disclosure form to note where their donations and funding is coming from.

Senator, Orion Block, believes this new change is unfair to people who do not have outside resources. She stated that if any student was to receive a substantial donation it will then give them an edge over other candidates. She opposed the motion to vote for the code change. However, Alexanian believes that this will now encourage students to properly network in order to widen their sources. She also stated that the new code change best reflects the funding process of U.S. presidential elections.

In order to make funding equal for all candidates, a single donor is allowed to donate $50, and a club or organization is allowed $100. This restricts the amount of cash donations one person can give to a single candidate. The maximum spending expenditures for an independent candidate is $500. President/vice president ticket is $500. A slate’s expenditure is capped at $1,000. A typical slate includes three to 22 senators.

“In my opinion it is up to the students to seek any donations. If they know anyone that can help them then that is in their benefit,” Alexanian noted.

At a general AS senate meeting on Feb. 2, they appointed Ben Weissman as the new chair of athletics. It was also stated during the meeting that Chair of Finance, Ryan Lassen, has resigned his position. Last week, Frank Duarte announced his resignation from AS as the Mike Curb College of Arts, Media and Communication senator.

President, Tiffany Zaich, and Vice President, Talar Alexanian, will be graduating this spring semester, so both positions are available. All current senators must run again, since their term in office is only for a year.

Feb. 16 is the first day students are allowed to start running. AS will have booths along campus known as “Power your voice” in order to encourage students to run for office. Votes will be cast on April 1 and 2.