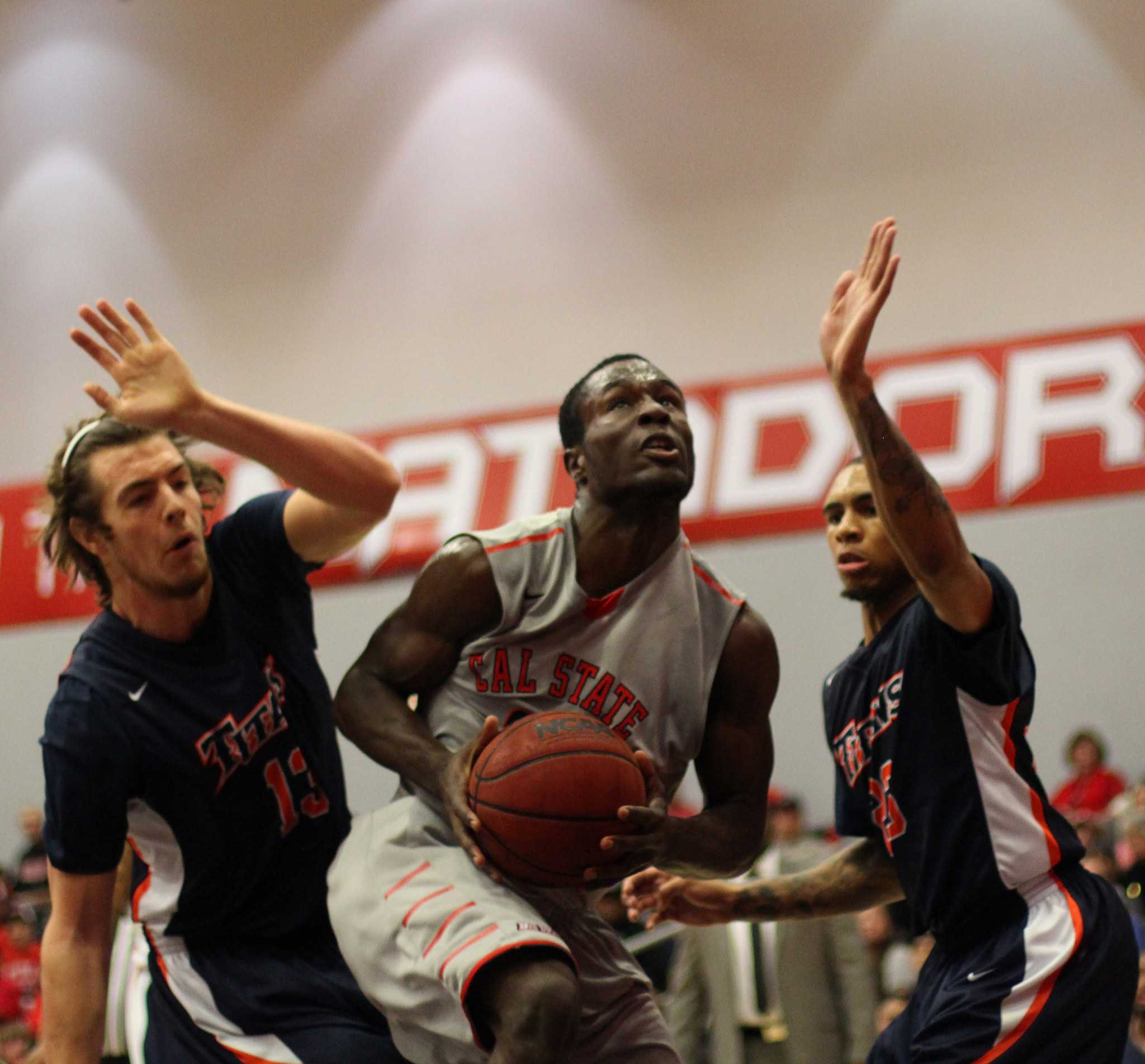 Both teams provided very little resistance at the rim early on, allowing each other to shoot well over 50 percent early on.

Most of the Matadors’ early success in the paint came from a layup by senior forward Stephan Hicks and an emphatic one-handed dunk by senior forward, Stephen Maxwell, to give CSUN an early 11-10 lead.

But after Maxwell was assessed his third foul early in the half, CSUN moved away from the paint and began settling for more jump shots, which caused their offense to stall. Fullerton, on the other hand, continued to attack the basket utilizing screen and roll action, which resulted in a 9-0 run at the midway point of the half and a 17-25 lead with 7:31 left in the half.

The Matadors responded to that run with a 10-2 run of their own, highlighted by Webb’s 3-pointer and junior forward Tre Hale-Edmerson’s and-one.

Despite that run, the Matadors were not able to finish off defensive possessions late in the half. The Titans were able to crash the boards and make a living around the basket, scoring 22 of their 35 first half points in the paint.

As the second half got underway, the Matadors looked livelier on both sides of the court as Hicks emphatically blocked a layup and Maxwell threw down a dunk on a Titan defender.

Those highlight reel plays did not translate to any momentum for the Matadors as they saw the Titans build a 44-33 lead at the 14:46 mark in the second half.

“When guys can’t sustain it, there’s not much you can do,” Theus said of the momentum.

Momentum, or lack thereof, proved to be the story in the second half, as CSUN could never seem pair a defensive stop with a score on the other end and vice-versa, especially with Theus’s roster options being very limited.

“Guys that aren’t playing well in normal circumstances, you can take them out of the game,” Theus said. “But we don’t have the luxury.”

After the Matadors hung around and stayed within striking distance of the Titans for most of the second half, fatigue got the best of the shorthanded Matadors again and things finally fell apart when Fullerton’s senior guard Alex Harris made back-to-back pull up 3-pointers to extend the Titans’ lead to 18 points with 8:55 left in the half.

“I just don’t think we have enough bodies to give those guys enough breaks, so that they can be fresh in the second half,” Theus said.

At the end of the day, the difference was that Titans were just able push around a worn-out and undermanned Matadors squad (who had 7 players play over 20 minutes), as they edged CSUN in second chance points 14-4 and in points in the paint 18-32.

“The bottom line is that their bigs just beat our guys up pretty bad tonight,” Theus said. “Our bigs just couldn’t play against them.”

CSUN will try to win their first game in three weeks on Saturday against UC Davis in the Matadome.