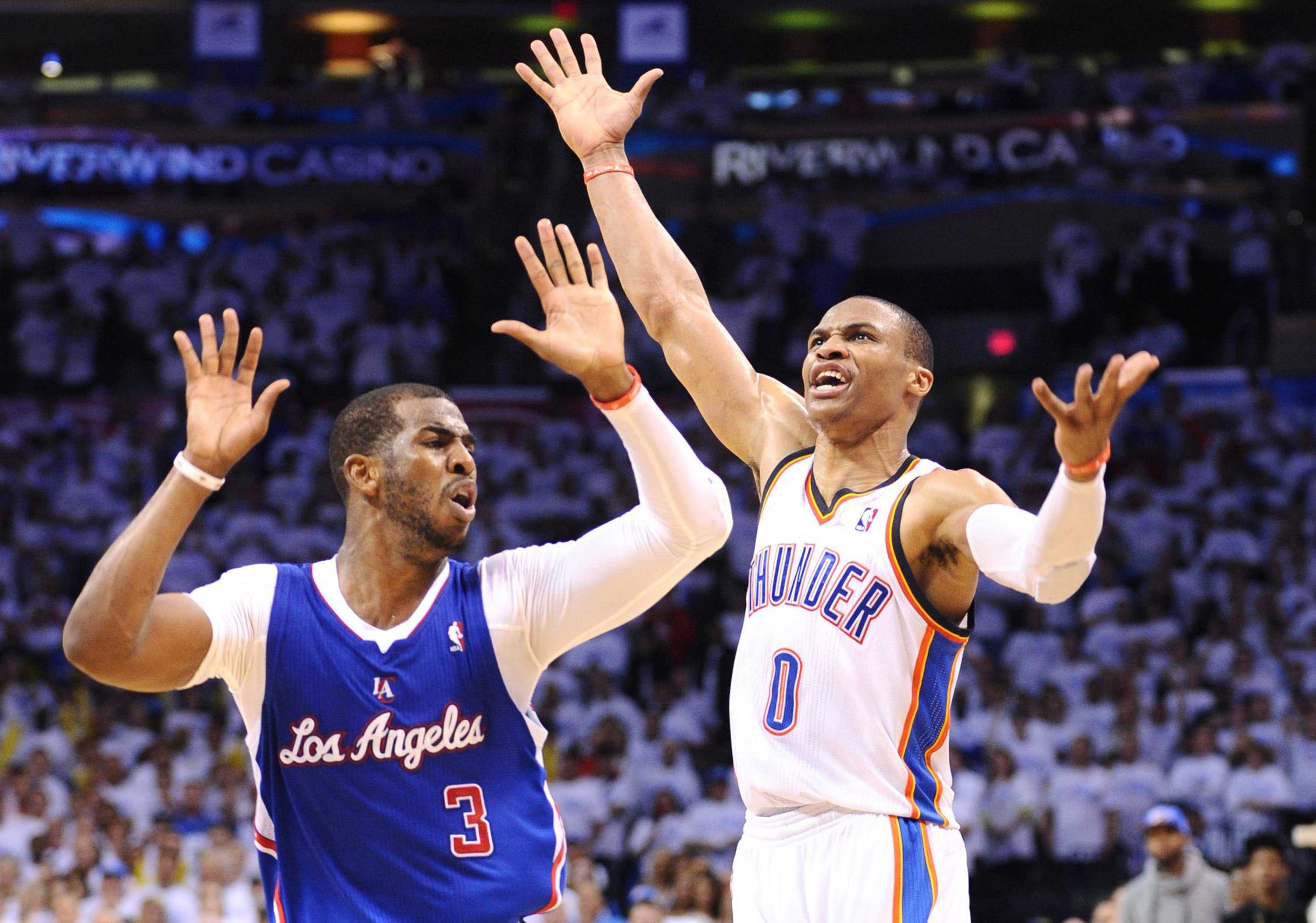 With the All-Star game looming over for the next few days, there has been much debate on the starting five for the respective conferences. Sundial Sports reporters Jordan Ball and Julius Lasin will provide their top five players in each position until the big game on Feb. 15th.

5. Kyle Lowry: Despite the fact Lowry is not a media beloved player or” Superstar”, he’s definitely proven he’s a top five point guard. Lowry is certainly the most underrated point guard even though he’s averaging career highs in points and rebounds while still producing seven assists per game. Lowry has been the catalyst in turning around a Toronto Raptors franchise who were in desperate need of help. He is one of the best two-way point guards in the league despite not having superstar talent around him like others. The Raptors are currently second place in the Eastern Conference with All-Star DeMar DeRozan sitting out 21 games. Without their stingy defensive, tenacious rebounding, Lowry is a world class leader and the Raptors would not be an Eastern Conference powerhouse.

4. John Wall: Leading the NBA with 10.2 assists per game. Helping the Washington Wizards to third place in the Eastern Conference definitely qualifies you as a top-five point guard. Wall is the quickest guard in the NBA and combine that with his ability to average 20 points, five rebounds, and 10 assists on any given night makes him a nightmare match-up. Being an excellent defender, Wall has an uncanny ability to make you pay on both ends of the floor. Wall has all the tools to become the best point guard in the NBA, but he’s making a strong case for that title right now.

3. Russell Westbrook: Though Russell Westbrook has sat out a decent amount of games the last two years, he’s easily the most athletically dominant point guard the NBA has ever seen. His Kobe-like tenacity, defensive consistency, his unparalleled athleticism and not to mention a mid-range game unlike anyone else. There is not one person who wouldn’t want Russell Westbrook on their team. Before he went down with an injury early in the year he was making his case for league MVP. He’s averaging 25 points, six rebounds, eight assists and two steals. Forget that he’s easily a top five point guard but we need to start talking about Westbrook as a perennial top five MVP candidate.

2. Rajon Rondo: Before Rondo got traded to the Dallas Mavericks he was averaging a league high 12 assists with the Boston Celtics. Yes 12 assists. Name five people on the Celtics right now, don’t worry I’ll wait. Rondo had the Celtics in striking distance of the 7-8th seed in the East with a bunch of young role players. The main component that stands out when you hear about Rondo is his IQ. He’s a walking triple double machine, has all-time great basketball instincts, all-time great defense and he is by far the best pure passer this game has seen since Steve Nash or John Stockton were in their primes. Though his assists numbers have went down to nine, yes only nine, since he has joined the Mavericks Rondo gives the Mavericks something they have lacked the last two playoff appearances and that’s someone who can keep these Western Conference point guards in check. In the last 10 years who, at the point guard position, has had bigger playoff moments then Rondo. He shows up when it counts most which is why he’s highly rated.

1. Chris Paul: Yes, Chris Paul is 29 years-old. Yes, there are a lot of phenomenal exciting young point guards, and no he has not won a championship yet. Those are all true facts, but despite all of them Chris Paul is still the best. Like Rondo, Paul can make any player look good but what separates him over the rest is that he can take a historically terrible Los Angeles Clippers franchise and make them a perennial championship contender. He is the model of consistency at the most loaded position in the NBA. Since his rookie year Paul has never averaged less than 16 points-per-game and nine assists. We tend to focus too much on Championships then we do consistency because people easily forget, that to win a championship you need a great TEAM. He has all of the intangibles you want every point guard to have. He has a great IQ, a lockdown defender, great passer, shoots the ball well, feisty competitor and despite the lack of team talent he’s had throughout his career unlike Curry, Lillard or Irving. He is able to make those players around him shine. Chris Paul is definitely a top 5 point guard but he’s by far the best since Isiah Thomas so enjoy him while it lasts.

5. Damian Lillard: Although Damian Lillard was not selected to be an all-star by the fans or the coaches, he is a top-five point guard because of his ability to singlehandedly take games over at a moment’s notice. Lillard is currently fourth among point guards in scoring, while shooting a very respectable 34.7 percent from the 3-point line. Simply put, when the game is on the line, there are few players in this league I would rather have than Damian Lillard.

4. Stephen Curry: Despite the fact that Curry might win the MVP this year, he still hasn’t proven his worth in the postseason or shown that he can be a lockdown defender like the guys above him on this list. However, it is difficult to ignore that Curry has improved his defense tremendously and is still the best shooting point guard bar-none. Curry has an out-of-this-world true shooting percentage (which adds more value to three point shots) of 62.3 percent, entering February 4. Even though he is one of the NBA’s most prolific shooters, Curry still has the wherewithal to dish out 8.2 assists per game, meaning that he can make plays for the rest of the Warriors’ offensive juggernauts.

3. Rajon Rondo: Regardless if the numbers suggest that Rajon Rondo’s presence has hindered the Mavericks, it’s still difficult to ignore his impact on both sides of the court. In spite of not having any semblance of a jump shot, Rondo is still able to create offense for his teammates, as he has averaged at least eight assists per game in every season for the past seven seasons, including three seasons of over 11 assists per game. His court vision may be what fans adore most, but his versatility and grit on the defensive side makes him one of the elite point guards in the league. Being a member of the Doc Rivers-led Celtics taught Rondo the value of toughness on defense, and as a result, he has been able to defend players like LeBron James, Dwyane Wade and Kobe Bryant in meaningful playoff matchups. A recent string of injuries has plagued Rondo, but his talent, toughness and leadership can elevate a playoff contender into a championship contender.

2. Russell Westbrook: What makes Russell Westbrook the second best point guard in the league isn’t just his jaw-dropping athleticism, it’s his competitiveness that sets him apart from the Derrick Roses and John Walls of the world. The guy is borderline maniacal; he wears his heart on his sleeve and will sacrifice his body to win. He’s one of the few guys who will do anything to win, including risk injury, which he has done on multiple occasions. Aside from his passion and determination, the beauty of Westbrook is the controlled chaos that he plays with. In recent years, Westbrook has learned to pick his spots and ease up on pushing the ball down court, and consequently, he now leads all point guards in player efficiency rating (PER). What makes that figure even more astonishing is that Westbrook leads all point guards in usage rate, meaning that he is the most involved point guard on offense in the league, whether it be through scoring or passing. With the responsibility that Westbrook possesses on the Thunder, his production and value is nothing short of elite.

1. Chris Paul: It may feel like Paul, who is now 29, is beginning to show signs of decline and age, but it might just be that fans are beginning to sense that the “Chris Paul is the best point guard in the league” narrative is getting stale. Well that’s too bad for them because Chris Paul is still the best lead guard the NBA has to offer. Paul is still third in PER, second in true shooting percentage, third in assists per game, fourth in steals and first in assists-to-turnover ratio among point guards. In addition to his individual accolades, Paul also captains the best team in terms of offensive efficiency (points per 100 possessions). At this stage, the only thing that may hinder Paul’s credibility is his teams’ inability to get out of the second round of the playoffs. But then again, when’s the last time a team who won the NBA title relied on their point guard as much as the Clippers and Hornets did with Paul? Probably not since Isaiah Thomas in the late 80s, has a champion asked a point guard to bare as much responsibility as Paul, so his postseason shortcomings should not discredit his greatness.

Do you agree with Jordan and Julius? Let them know at @LasinJulius and @Golden_Jordan1.