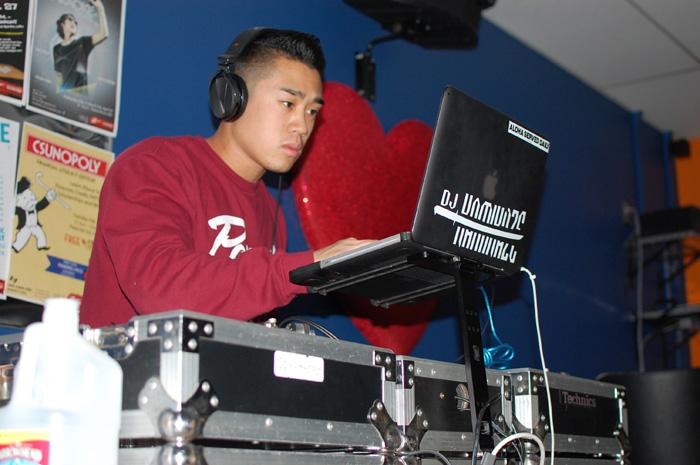 With Valentine’s Day just around the corner, the USU hosted a successful event at the Games Room that brought out students to celebrate a night dedicated to a decade where boy bands were cool and wearing plaid was a must, with a neon twist. While the DJ played favorite 90s songs via request, students enjoyed a variety of games and pizza.

Before you entered the venue, a photograph taken holding two large red harts was a must. Music was loud enough to be heard from the SRC, grabbing students attention. Upon entering the game room, students were given a piece of paper to write down their song dedication for later use, once they had a request. For the décor, CDs hung and hearts with “I love the 90s” hung from the ceiling, along with other romantic Valentine’s Day decorations.

Every pool table was occupied with students playing against each other, while their clothing shone under the neon lights. By 9 p.m., the room appeared to be getting filled, as more students began to make an appearance. Some students were just getting out of class, and decided to end their Thursday night with some fun.

Students played video games, others played pool and some got a little overly competitive in the ping-pong table. Since it is the game room, students preferred to participate in the games, while others opted to use the empty dance floor, and dance to their favorite 90s hits.

“We are such a commuter school, we need students to come together and this is a perfect way,“ said Dani Clark, former student who encourages for more events on campus. “It gets them out of their homes. I live in the dorms and there is nothing to do there.”