Men’s Basketball: CSUN burnt out in 68-55 loss to UC Davis 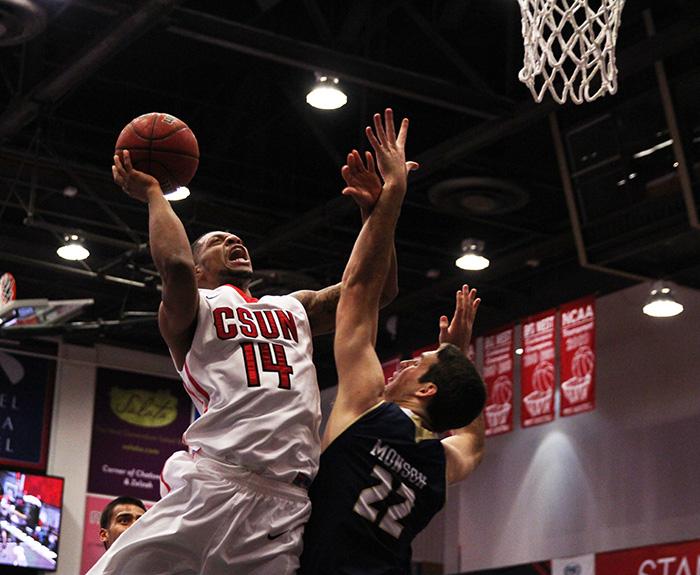 Sophomore Aaron Parks powers his over UC Davis' Neal Monson in during the first half in the Matadors matchup on Feb. 7, 2015. The Matadors fell to the Aggies, 55-68, and now sit on a six game losing streak. (Trevor Stamp / Multimedia Editor)

“It puts so much pressure on your team when every single play matters,” CSUN head coach Reggie Theus said.

Regarding the effect of missing nine players, Theus said, “Every single missed opportunity has a big effect on the outcome of the game for us.”

When asked about the how the missing players feel about their effect on the game, Theus said, “You have to talk to the school about that one.”

In spite of absent players, the game opened up favorably for the Matadors as they jumped out to a 6-2 lead, due in large part to the interior presence of senior forwards Stephan Hicks and Stephen Maxwell.

However, that lead was short lived as UC Davis answered back with a 14-2 run over the next 3:45, helping the Aggies build a comfortable cushion for the majority of the half.

With the Aggies in control of the game and in danger of pulling away, sophomore guard Aaron Parks was able to keep the Matadors in contention by putting pressure on the Aggies on both sides of the floor. In the first half, Parks was able to get five points, one steal and an assist that led to an emphatic dunk by Maxwell.

Despite Parks’s effort, the Matadors were not able to finish off runs and regain the lead. It seemed every time CSUN cut it to a one or two possession lead, they would commit a turnover or forget to rotate on shooters defensively.

“When you’re down four and you have an opportunity to cut it to two, and you lose your man, all of a sudden, you give up a three,” Theus said of momentum-killing plays. “Those are things that happen to teams that are not winning.”

In spite of their mental errors, the Matadors still managed to force 11 Aggie turnovers in the first half, which helped negate the Aggies’ strong start from the 3-point line (6-13).

“We just wanted to be bouncy on defense,” senior forward Devonte Elliott said. “You know, real active on defense.”

A strong defensive effort notwithstanding, the Matadors still found themselves trailing UC Davis by nine after Aggies’ senior guard Tyler Les made a 3-point shot with 33 seconds left in the half. But just as things began to look bleak for the Matadors, Stephan Hicks made a 3-pointer as the buzzer sounded to send the Matadors to the locker room with some much-needed momentum.

The Matadors came out in the second half looking to build on that momentum, as Hicks was able to intercept a pass and take it down to the other end of the floor for a two-handed dunk on the opening possession.

After that initial sequence, both teams seemed to settle down, as both teams traded multiple defensive stops for the better part of five minutes.

But once again, the Aggies’ ability to shoot the 3-pointer that helped allotted them breathing room, stretching the Matadors’ deficit to nine with 13:46 left in the half.

Following a timeout with the Matadors on the ropes, freshman guard Taelin Webb was able to display his athletic ability once again as he drove baseline and threw down a one-handed tomahawk dunk on the Aggies’ 6’9” forward, Josh Ritchart.

Webb’s dunk seemed to wake up his teammates and the crowd at the Matadome. Both teams were able to come alive. The crowd’s intensity helped them battle back after every seemingly backbreaking 3-pointer the Aggies were able to convert late in the game.

Although the Matadors displayed resilience and poise, they were just not able to extend their runs long enough, as a pair of late 3-pointers and multiple offensive rebounds by the Aggies sealed their fate.

“This is a team [UC Davis] that shoots pretty well from the perimeter and I thought we took away a lot of things from them,” Theus said. But when it’s all said and done, we just didn’t have enough to get the job done.”

The Matadors will look to snap their six-game losing streak next Thursday against the Cal Poly Mustangs in Pomona.