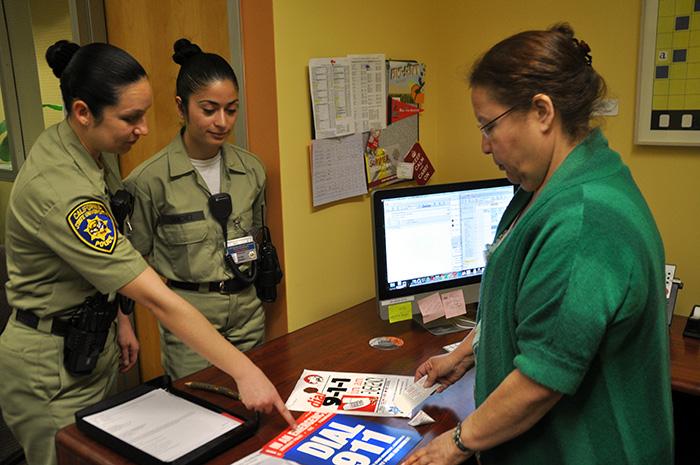 The CSUN Police Department has launched its biennial 911 Campaign on campus to inform students and staff of the necessary numbers to call in case of an on-campus emergency.

The campaign, which began at the start of the Spring semester, focused on reaching out to different parts on campus to inform others of the importance of having the campus police number saved on their phones.

“Because we did have cadets that went to nearly every building on campus, a lot of it was word of mouth,” said Villalobos.

The reason for the campaign starts with the difference between using a cell phone to dial 911 and (818) 677-2111, the number for campus police.

When a student calls 911 from their phone, it goes to the the Los Angeles Police Department, as opposed to CSUN PD. This isn’t the case with the blue light phone booths and the teletypewriter (TTY) phones on campus, which field calls directly to the CSUN Police Department.

As part of the campaign, CSUN PD’s cadets visited several buildings on campus to talk to students and faculty.

“It’s a system that we have that works, it’s informative, it gets our cadets out into the community and we make a personal connection with faculty and staff, student workers,” said Villalobos.

For some on campus, that interpersonal exchange matters in the campaign.

“I think that it’s a good thing that they’re out spreading the word,” said Rayetta Esquibel, administrative assistant for marketing and communications. “We don’t see them on campus very often unless it’s an emergency, so it’s nice to see them outside an emergency setting.”

The campaign brings to light the importance of being prepared for any situation.

“We had a shooter on campus not too long ago,” said Esquibel, referring to an incident at CSUN in September 2011, in which a student threatening to harm others with a gun, prompted campus police to evacuate the Oviatt Library.

“I think that was the impetus to remind people about the campaign,” said Eqsuibel.

However, the program had been in place before that incident. According to Villalobos, CSUN PD has been informing the campus for the past 12 years.

The campaign is done every two years to inform incoming students about this issue, and as a reminder for others who have been on campus longer.

“Because we are a campus community that has a population that changes very often, it is really important to remind the community how to reach police in the event of an emergency,” said Villalobos. .