The effects of raising the minimum wage 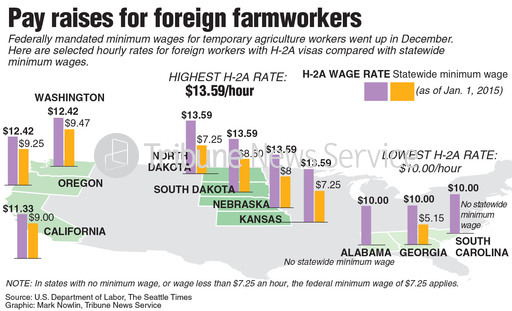 America hasn’t drastically changed over the past five years. Barack Obama is still president and the federal minimum wage is still $7.25.

Yes, you read that correctly. The federal minimum wage hasn’t changed since 2009 while the cost of living has drastically risen. States are allowed to set their own minimum wages so long as they are above the federal standard of $7.25. This means the federal government believes workers are worth the same today as they were during the 2008 recession.

Chris Bishay, a 21-year-old college student, hasn’t paid a dollar off his credit card in two months. He helps his parents pay the bills and works a minimum wage job in Los Angeles, making $9 an hour working 16 hours a week.

Before finding his current job, Bishay worked a secretary job making $12 an hour at 30 hours a week. This means he makes $864 less every month at his current job than his old one.

“I’ve lived on both sides of the spectrum,” Bishay said. “Going from how much I used to make to how much I make now is definitely a change in lifestyle.”

That $864 for him means the difference between helping his parents pay the phone bill and paying his car insurance. It means he has to choose between buying groceries and filling gas in his car.

“Thoughts such as ‘will I have enough money to pay my bills next month surge through my mind.”

“I’m proposing to responsibly and gradually raise the minimum wage in L.A. to $13.25 because it’s deplorable and bad for our economy to have one million Angelenos stuck in poverty, even when working full time,” Garcetti said at a rally in Los Angeles.

Polls show 65 percent of Los Angeles residents are in favor of raising the minimum wage.

“It’s a bit premature to talk specifics. He is looking forward to seeing the Mayor’s proposal go through committee, then head to the full council for a vote.“

A minimum wage of more than $13 sounds too good to be true, right? What about claims of higher unemployment, fewer businesses, and inflation occurring?

According to a nation-wide study by the American Sustainable Business Council, 61% of small business owners support a minimum wage raise to $10.10 and adjusting the wage to keep pace with the cost of living. However, some Los Angeles businesses are not in favor of raising the wage to $13.25.

“If it passes, I’m letting go of some really great people,” said Iman Ahmad, the manager of a local supermarket in Los Angeles. “I feel bad. I really do. But I have to either let go of my employees or cut all their hours.”

Ahmad’s employees say his current work conditions are fair. He has six full-time employees who make $10 an hour. They have health benefits and are guaranteed 40 hours a week.

If Ahmad paid the proposed wage it would mean paying more than $3,000 a month to his full-time workers alone.

The Department of Labor said, “studies on minimum wage increases found no discernable effect on employment.”

“You could argue that higher minimum wages will make businesses cut back on their hiring and hire fewer people so that fewer people have jobs and fewer have money to spend to boost the economy,” said Jane Bayes, a world economist at Cal State Northridge.

However, Bayes said this argument is unlikely to be proven because the facts lead to the conclusion that a wage raise can help stimulate the economy.

That leaves the myth about inflation being a factor. To simplify terms, inflation is an increase in the price of products and devaluation of money. Essentially, the wage raise gives people more money, which means it will decrease the value of a dollar and raise the cost of groceries.

According to many studies, the inflation myth is yet to be proven. If the federal minimum wage today adjusted for inflation over the past 40 years it would be at $10.90. America is behind by $3.65 an hour based on price and cost of living adjustments.

At $3.65 an hour the average 40-hour minimum wage worker will make $146 dollars more a week. That is $584 more a month. But that is only federally; when one looks at California it will be much different.

If California raises its minimum wage to $13.25 it will be a difference of $4.25 an hour. That means the average 40-hour minimum wage worker in California will make nearly $679 more a month.

“That’s nearly $700 a month,” said Bishay. “I wouldn’t have to worry about food. Or insurance. Or food,” he said hysterically.

The chart above shows the average cost of necessities for a two-person household. This essentially means a raise wage can provide the necessities for two people and still have a little over $100 left.

The numbers may be confusing, but conclusive evidence shows nearly 37 percent of people in poverty that work at least 40 hours a week are not making enough to support themselves and their dependents.

When looking at the wage increase on a large scale, it is apparent that Americans’ quality of living will be better and worse to a degree. Some will make more money and some will lose their jobs.

Mayor Garcetti’s proposal comes with its strengths and weaknesses and some might find it hard to fathom an environment where waiters and waitresses are paid a proper wage from the get-go.

As of now, Los Angeles minimum wage workers are hoping for a raise, not to prosper, but rather to survive today’s society.