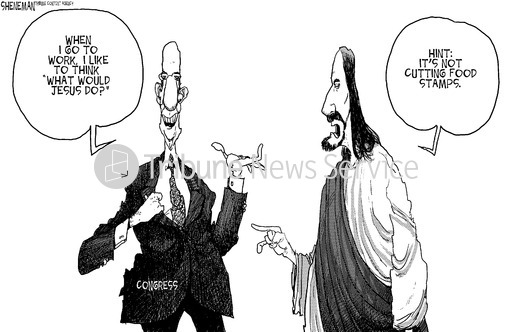 Cutting the food stamp budget has immense repercussions for Americans. This will be more impactful than the advantages, especially in the short term.

Early in 2014 Congress elected to cut the food stamp budget by $8.7 billion over the next ten years. This was to conclude the signing of the Farm Bill. The Senate voted 68-32. This was sent to the president and he signed, making the bill official.

Several members of Congress originally proposed a $39 billion dollar cut to the food stamp budget, but both parties were able to come to a content resolution to pass this bipartisan bill.

This is a fiscally responsible accomplishment for Congress, who have been clashing with one another throughout President Obama’s tenure.

Congress had their fair share of quarrels, but on this particular item, both sides wanted to resolve the issue. This was obvious because more Democrats voted for it, then against it. It was an actual compromising act (or the Democratic Caucus and the GOP just wanted to get something done.)

Congress’s success however, means many American households will deal with the aftermath.

The aftermath has already begun because studies have currently been produced about food stamp households.

These imminent stricter rules and regulations will hinder countless families ability to help themselves and their children because they might not qualify for something they did just a year ago.

Saving $8.7 billion is necessary for various reasons in this shifting economy, but it seems like with the passing of this bill, Congress is actively dismissing the lower class and middle classes.

Though food stamp cuts are one portion of the Farm Bill, this was obviously the important portion, or it would not have taken them nearly two years to pass this bill.

The changing of the Supplemental Nutrition Assistance Program (SNAP) will affect college students too. College students are mainly an arrangement of people who are not married, have no children, take maximum units and work a decent amount of hours. Those are the exact people that this bill was meant to exclude. The usual declarations you hear from college students are about how broke they are, how hard it is to budget their limited finances, how many loans they have taken out, how they cannot work full hours plus be a full-time student and other things of that manner.

Students should definitely be able to receive food stamps and take full advantage of the food stamp system, especially since they are in dire need of the assistance. With the new requirements in place, who knows if college students or lower-middle class American households will be able to seek advantage of a much needed assistance-food stamps.