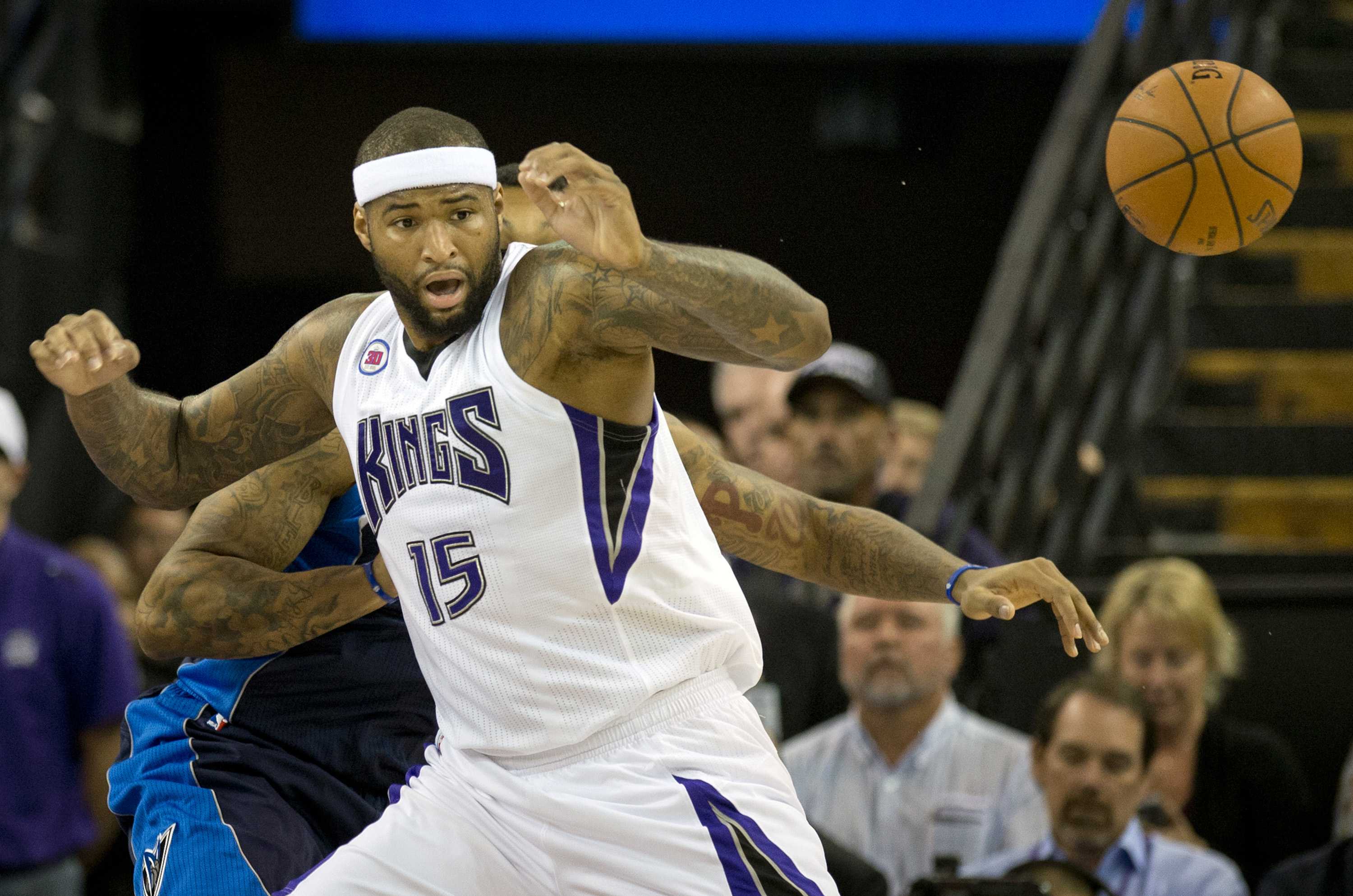 5. Dwight Howard: Since Howard left the Orlando Magic in 2012 he’s been rapidly declining. His production is not close to what it used to be and he looks like a shell of his former self. The reason Howard is a top five center is because he has shown enough production a top center should have and the centers off this list are not quite there yet. Despite dealing with injuries, this year he’s averaging 16 points and 11 rebounds. Any of my honorable mentions could be at this five spot but unfortunately they just don’t have the production Howard has displayed. 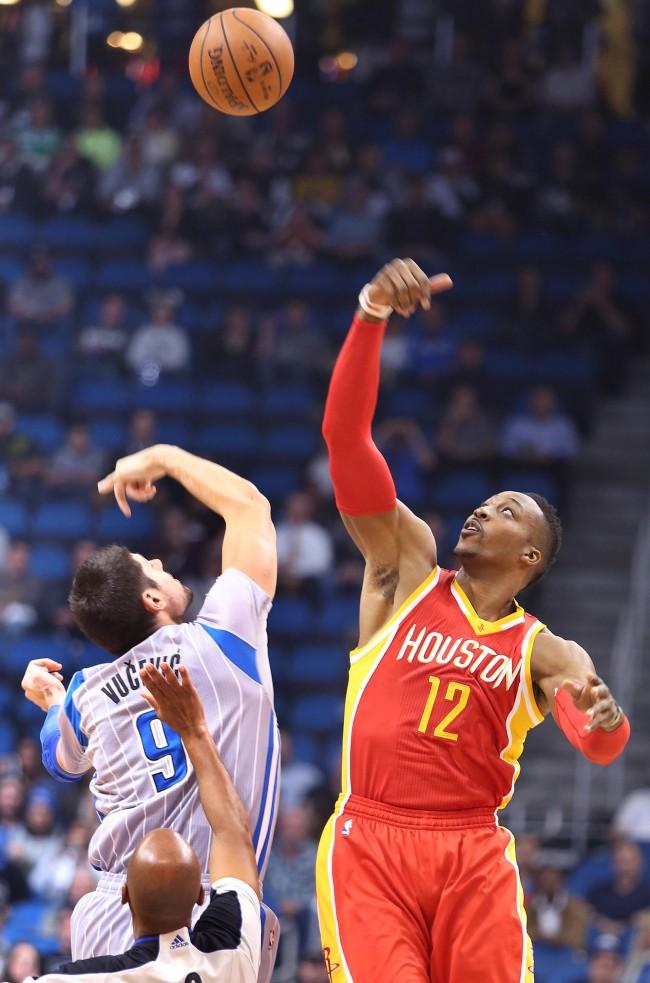 4. Nikola Vucevic: Vucevic is probably the most talented unknown center in the NBA. Playing for the Orlando Magic, Vucevic doesn’t get a chance to display his game often on the national stage but this guy has made his case as a top five center. This year he’s is averaging 19 points and 11 rebounds while, All Star reserve, Chris Bosh is averaging 21 points and seven rebounds. From production, Vucevic is All Star worthy in comparison with other Eastern Conference centers. At 24 years-old, he has continually improved his game in just four years in the NBA and has the skillset to become better.

3. Al Horford: In just 29 games last year, Horford was performing like the best center in the Eastern Conference, averaging 18.6 points, 8.4 rebounds, 2.6 assists and 1.5 blocks until a season ending injury derailed his season. The Atlanta Hawks chances to really compete in the playoffs were stalled, but not this year. What makes this Hawks team, with essentially the same supporting cast, more potent and championship determined, with the second best record (43-10) in the NBA? Al Horford. His impact and versatility on both ends of the court turned the Hawks from a mediocre 8th seed into the best team in the Eastern Conference. 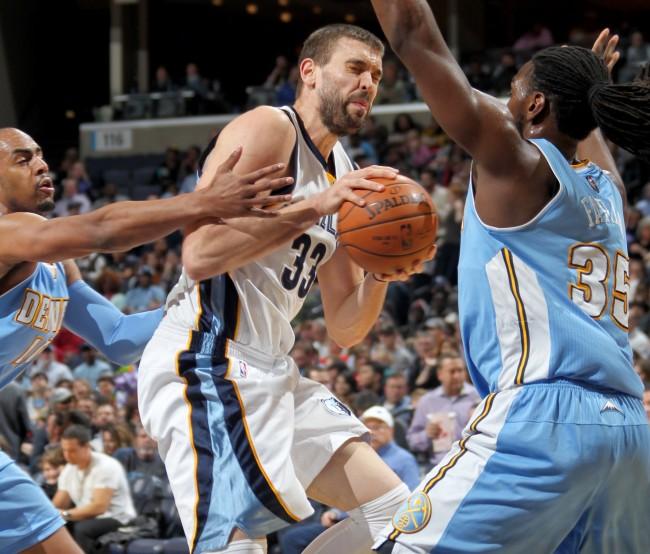 2. Marc Gasol: This year, Gasol is having his best scoring year averaging career highs in points (18.5) and shots-per-game (13.8) while posting eight rebounds playing alongside rebounding machine Zach Randolph. He’s a main reason the Grizzlies are holding the second best record (39-13) in the tough Western Conference without a “true superstar”. Besides his tenacity, post game and being a defensive anchor, what makes Gasol unique is his passing ability. He leads all centers with 3.8 assists per game and is second among all big men. Though Gasol is second on my list, the disparity from Gasol and number one versus the other centers is a wide margin.

1. DeMarcus Cousins: DeMarcus Cousins, at 24-years-old, is the best center in the NBA without question. Last year he averaged 22.7 points, 11.7 rebounds, 2.9 assists, 1.5 steals and 1.3 blocks. How was he not an All Star? What can he do to top those numbers this year? How about averaging career highs in points (23.9), rebounds (12.4), assists (3.2), blocks (1.7), free throw percentage (.809), while tying his career high in steals (1.5). Cousins still got snubbed as an All Star only making the team due to Kobe’s injury, though he’s top seven in the NBA in scoring and top three in rebounding. As an observer seeing the lack of respect Cousins receives from fans, coaches and anyone else is hard to believe. The dominance and versatility he is exuding is reminiscent of Patrick Ewing. At the rate Cousins is playing his name could eventually be in the discussion for one of the best centers ever, but certainly the best of this generation. 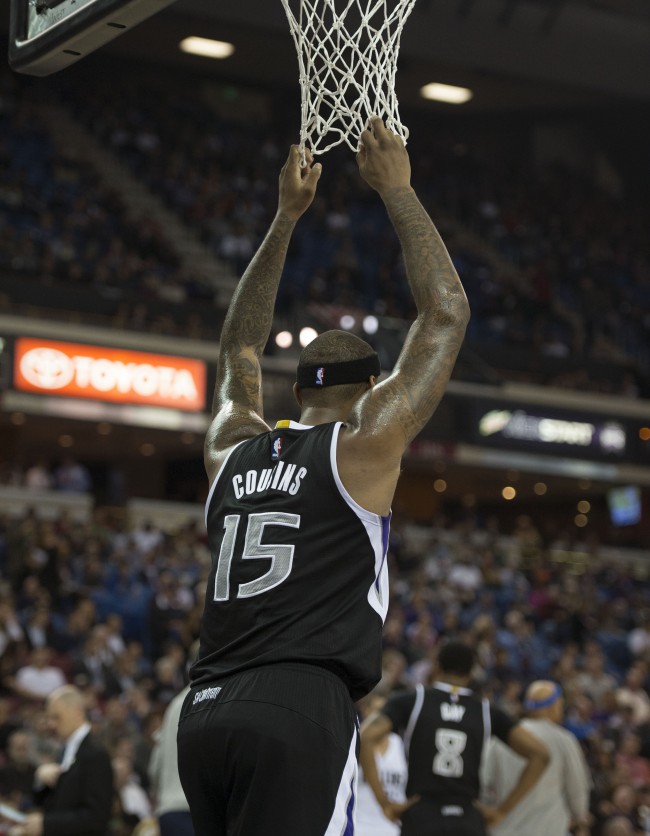 5. DeAndre Jordan: Although Jordan is not as offensively refined as some of the other elite centers in the NBA, he makes up for it by being outstanding at everything else he does. Jordan is the perfect complementary big man for the Clippers as he averages a double-double with 10.5 points and 13.7 rebounds per game on an unreal 72.5 percent shooting. And contrary to common thinking, Jordan actually enhances the Clippers on offense, as the Clippers average 13 points more per 100 possessions when Jordan is on the floor, as opposed to when he’s not. Despite his positive impact on offense, Jordan still hangs his hat on the defensive end of the floor. When it comes to protecting the rim and sending shots back, Jordan is first among centers in blocks per game, averaging 2.36 blocks per game. Yes, Jordan is far from the “traditional” big man on the offensive end, but his dominance blocking shots and rebounding makes him a top 5 center in my book. 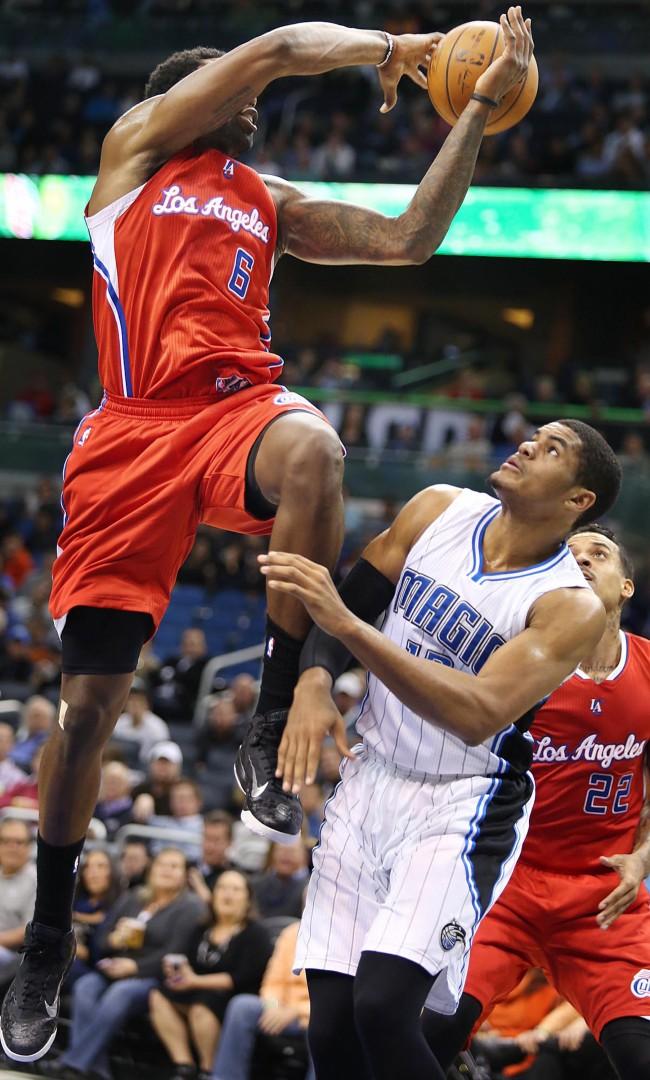 4. Dwight Howard: I like to think of Dwight Howard as more complete DeAndre Jordan. Like Jordan he’s a far cry from the immobile, plodding and massive centers of the past. Howard is a quicker, leaner and more agile type of center that is able to maneuver with ease in and out of the paint. That mobility and athleticism allows Howard to compensate for his lack of post moves, and score with relative ease in around the rim–16.3 points per game on 57.6 percent shooting. The scariest part of those offensive numbers is that many consider it to be a “disappointing” season for Howard thus far. Furthermore, Howard is still is a force on the defensive end, where opponents score 3.8 less points when he on the floor as opposed to when he’s sitting. In addition to his defensive impact on the team, he is also averaging 1.4 blocks per game this year, and 2.1 for his career. Howard’s off-the-court difficulty has caused opponents and fans to sour him, but think about this: he’s averaging 16.3 points and 11 rebounds with a PER of 18.24, and it’s considered a “disappointing” season. In today’s NBA, Howard’s disappointing season is most centers’ dream season. He’s still that good. 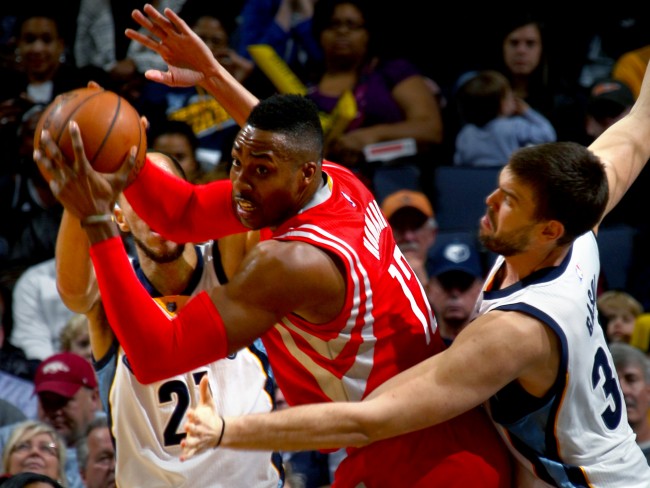 3. Joakim Noah: He’s one of those rare players in the league that can’t be judged based on statistics, as he does so much for the Bulls in so many different ways. For example, Noah has learned to see the floor and make plays for his teammates in recent years, as evidenced by his 3.6 assists per game this season and 5 assists per game last season. Defensively, Noah is just as versatile. He is one the very few centers that can hedge hard and defend guards on pick and rolls, which allows the Bulls to play a multitude of defensive coverages, which is something that has made them one of the best defensive teams in the league over the last five seasons. But Noah’s most endearing trait may not be something tangible like defense or scoring, but rather, it is his heart and toughness. That may sound cliché, but if you watch Noah after an important offensive rebound or defensive stop, he will yell at the top of his lungs, which in turn, energizes and challenges his teammates to match his intensity and passion. Noah’s numbers may not reflect it, but he can and will do anything to lead his team to victory, and if that doesn’t make a guy top 5, I don’t know what will. 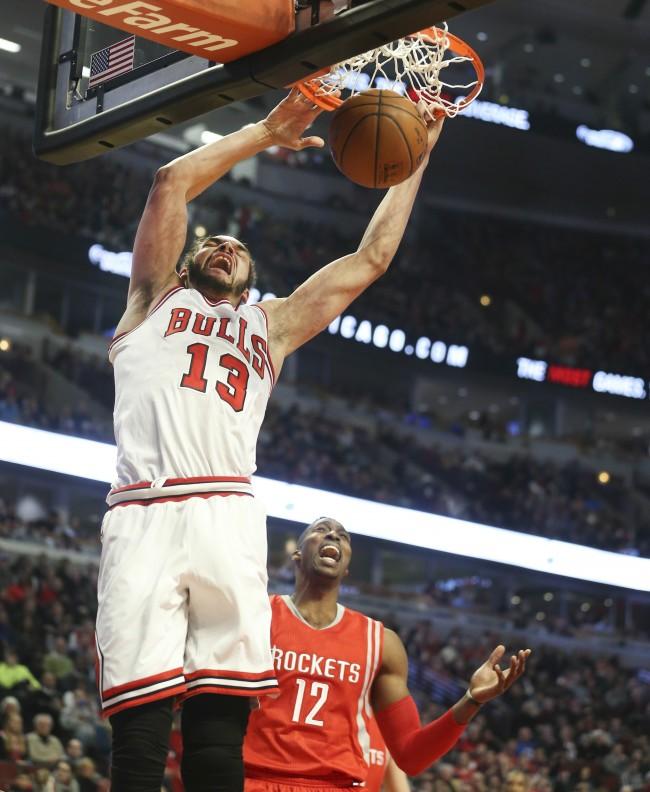 2. DeMarcus Cousins: Boogie Cousins as he is referred to, has really separated himself from most centers in the past couple of seasons, despite the Kings’ putrid roster. Cousin’s unique build and skillset has allowed him to outmuscle and beat opponents off the dribble offensively, en route to averages over 22 points per game during the last two seasons. In recent seasons, Cousins has also been a force down low as he averages 8.7 free throw attempts per game. In total, 81 percent of Cousins’s points have been either been in the paint or from free throws. Even though Cousins can be temperamental and lackadaisical, his talented overshadows those deficiencies, and it’s scary to think that his PER of 24.11 (second among centers) is just scratching the surface of what he is capable of.

1. Marc Gasol: Pau’s younger brother doesn’t necessarily blow anyone away with his statistics, but his ability to provide the Grizzlies with anything they need makes him the best center in the league. This season he is averaging a career-high in scoring, with 18.5 points per game. But in addition to that, Gasol is the focal point of the Grizzlies’ offense, something that most centers can’t say about their teams. Like the aforementioned Noah, Gasol’s value cannot be quantified in numbers, as he embodies the grit and grind that makes the Grizzlies so successful.