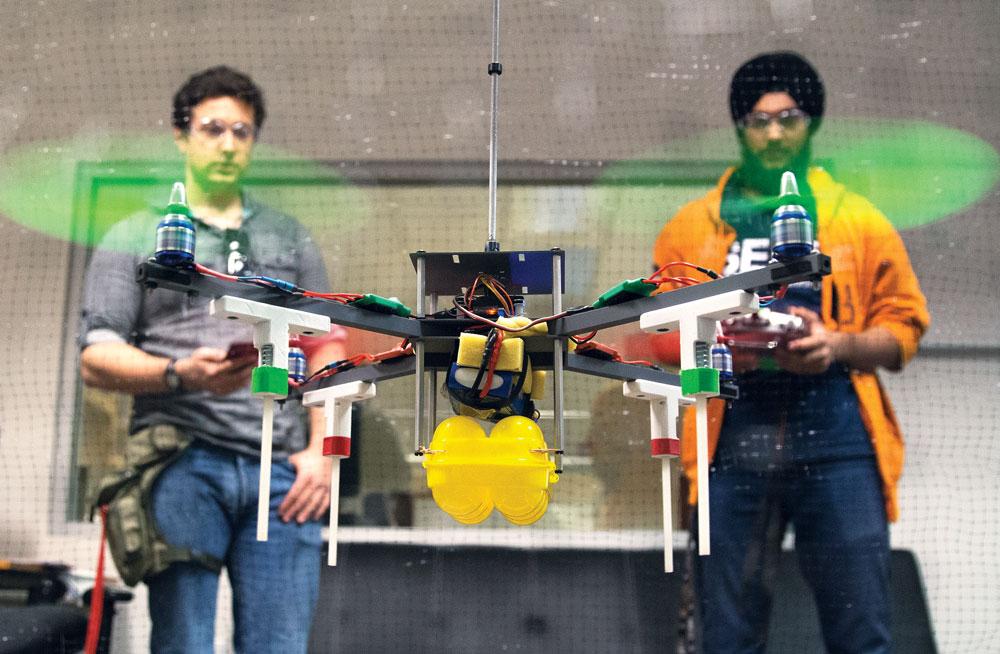 Last year one of the largest grants of the year was awarded to the Engineering and Computer Science department for a project to develop a new system to improve automation and human interaction as well as fund other robotics projects.

Part of the $263,598 grant, which was granted by the Department of Defense, is being used by 14 students and four members of the NASA Armstrong Flight Research Center are developing a team of two robots, one for ground and one for flight operations.

“Their goal is to be autonomous companion teammates with each other in contact with a remote operator, the goal being to traverse desert or exo-planet landscape to go and do mapping missions,” said Jeremy Friedman, mechanical engineering major and lab manager of the project. “It is supposed to be kind of a proofing concept for planetary exploration.”

Their research focuses on building trust between operators and learning-capable robots whose adaptability can make them unpredictable or hard to trust.

“This project is about human-machine-teaming,” said Friedman. “We’re looking at it in the context of search-and-rescue missions where you may have a dangerous fire where you don’t want to send your human operatives in there to go extract people but you have all these great robots who can do it to.”

The project is part of the NASA Challenge and includes the design of an educational module that could be put to use in other schools.

“It’s aimed at keeping minority students and underrepresented students … in school by teaching them that science is awesome and that they want to do science,” said Friedman.

If they win the challenge, NASA would provide resources to produce and distribute educational videos that would educate students, especially those from underrepresented groups.

“The challenge is aimed mostly at minority-serving institutions to increase the retention rates of minorities in universities, especially undergraduate students,” said Karanvir Panesar, computer engineering major and IT Manager for the project. “There is an outreach program associated with the challenge that we’re going to use to get the word out to all of these colleges.”

Another NASA program, Minority Innovation Challenges Institute (MICI), will connect them to more than 800 students at similar campuses.

“Once we have our proposal accepted we can talk to them and set up a webinar,” said Panesar. “And one of the representatives from this lab can go on the webinar and explain what the project is and get everyone interested in the project through that program.”

Panesar is currently working to improve the interface design to help the operators better communicate with the quad-copters and the ground control system.

“So the robot, whenever it sees a door, it’s going to come back to the operator and say ‘hey, is this a door, am I right?’” said Panesar. “On the ground control station computer the operator will see the image and they can say ‘yes, it’s a door so good job. Now go back and look for other doors.’”

The quad-copters are used as the base for the research. Values from the motor and simulations can be tested to see how the device behaves and saves time on real world testing.

Panesar said the grant money will also be used for things like a vertical take off and landing aircraft—“that’s possibly one of the vehicles that we can use for the rover and scout missions”—a ground vehicle—“that can sort of act as the mother ship for the air vehicles so if one of the vehicles needs to come back and get charged, it can land on the rover and then go back and do its mission”—and a couple of vehicles to be used as a ground control station and transportation.

Another project they are working on will integrate the quad-copters into a class for incoming freshmen. The Mechanical Engineering (ME) 101 class would be redesigned so that students could build and experiment with a version of their own based on the current project’s design.

Both projects are also working to integrate other fields into their designs and taking an interdisciplinary approach to their research.

“It’s not just engineering students,” Friedman said. “We also want to include psychology students, geography students because mapping is involved, art students because things like interface design play really heavily into the usability of a system.”

ME 101 would also utilize some of these concepts to help teach students about things like aesthetics and design.

Professor Nhut Ho, who received the grant, says that the research is one of the crucial ways that CSUN prepares students for industry jobs.

“You’ve heard about a lot of automation that people have built to assist people with everyday tasks,” said Ho.” So this is a very contemporary research question and it’s really important for our students to be able to work on a problem that is hot right now, a problem that a lot of people care about.”

Panesar and Friedman agree that the projects the grant is funding are applicable to a variety of products and research going on today.

“Human machine trust has really big applications in a lot of fields,” said Friedman. “Everything is supposed to be autonomous.”

Friedman says the technology could improve systems like drone package delivery, aerial photography for film studios, the reduction of airspace confusion, as well its primary applications in planetary exploration and search-and-rescue.

Another project designed to introduce students to the kinds of jobs they will find after college is the Human Powered Vehicle project, which will showcase in April.

Aram Khachatourians, the adviser for the class, says he believes the kinds of designs they produce could be seen in the near future.

“When I was a student here 25 years ago, hybrid electric vehicles were just a concept and when I did my senior design, that’s what we did,” he said. “And here we are 25 years later and everyone’s driving one.”

Friedman and Panesar say they know their research will be important in getting this tech into the hands of everyday people even though it may take some time for their research to be complete.

“A lot of the things we work on are fifteen year time-scale kinds of things,” said Friedman. “Dr. Ho always talks about how it’s important to start doing the research way ahead of time because in the future you’re going to need this kind of stuff and it’ll be done.”