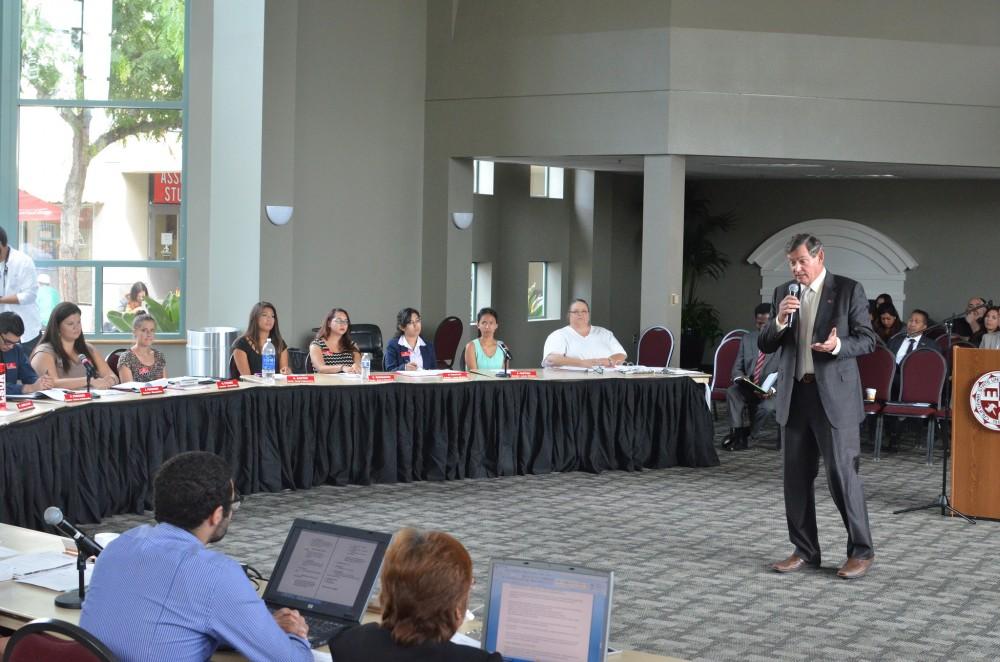 “I talk about the value of the CSU system, but when you as a student, [who] may say exactly the same thing that I say, your voice is much more powerful,” said White.

According to White, student’s involvement to better their education and improve their experience within the CSU system is extremely important.

White expressed that, according to budget and education, he realizes that money is an issue in some households and parents may not have high paying jobs. On the subject of money, he is aware and understanding of how sensitive and important this topic is.

The governor has put in his budget, and the legislature has supported the budget request of adding the state’s money into the CSU system.

“We are currently in discussion for next year for an increase in our state appropriation of $119 million,” said White. “It is money that would come to us next year on top of what we already have, and would stay with us going foreword, called recurring dollars, permanent dollars.”

According to White, there is a one-time opportunity on a one-time basis to to receive an extra $25 million to help with the decaying buildings that students take their classes in. Also, for the faculty and staff to help come up with innovative programs to help with improving the quality of the student’s education or even obtain a degree sooner.

In context, roughly the money given by the state of California is about 50 percent of the money it takes to operate the university. While the other 50 percent comes from the student’s tuition and fees, according to White.

White also mentioned the governor has expressed that the state appropriation will be increased by four percent, which is $119 million. However, since this is only half of the operating budget for the CSU system, this is only a two percent increase.

This is less than the rate of inflation, leaving the CSU system about $100 million short of what is needed to take care of current students, let alone admit students next year who are fully qualified. This results in not having room for those students in classrooms, laboratories, studios or clinics.

“So [the] trustees have approved a budget that’s almost $100 million more than what the governor has expressed interest in providing,” said White.

The Chancellor will be taking initiative within the legislative process by telling the CSU story in Sacramento to try and get more recurring funds, encouraging students to get involved and be an enormous part to make this goal a reality.

On the topic of the graduation initiative, the Chancellor emphasized that they would not be compromising quality of education for their goal for 2025 in trying to graduate 100,000 more students than the CSU system would without the initiative.

White threw out statistics of the CSU system, such as 10 percent that claim the workforce are graduates of a CSU, and that five percent of degrees come from the CSU system.

“It’s a good time to be graduating now compared to the recession,” said White. “There are more jobs and knowledge-based jobs are really the future of California’s success.”

White expressed that quality is in the eye of the student and faculty, and what skills can be attained from a quality-filled education. Skills of cultural confidence, communication both through technology and human on human, team work and being comfortable in a state of ambiguity, which will go beyond the knowledge of the ABC’s of a discipline.

The video from the online conference will be posted on Youtube.