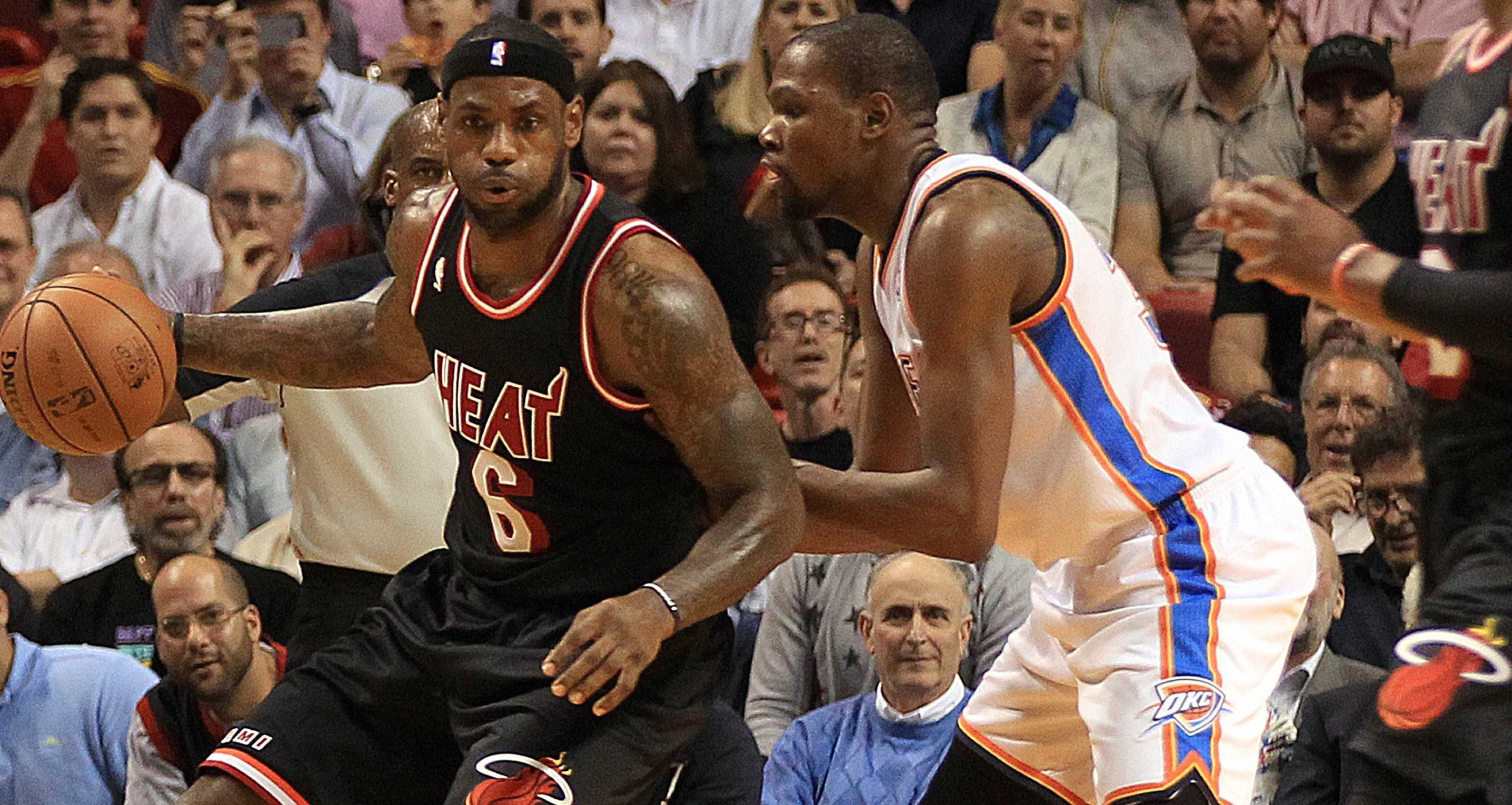 It's time for top-five small forwards in this edition of J&J's top-five. Photo courtesy of Tribune News Services.

With the All-Star game approaching in just a day, here’s the fourth installment of J&J’s Top-Five positions of the NBA. This edition, J&J brings you their best small forwards.

5. Gordon Hayward: In his fifth season, Gordon Hayward is one of the best unknown talents in the NBA and being on a small market team doesn’t give him the national recognition he deserves. Every year Hayward seems to make progression. This year he’s averaging a career-high 19.7 points-per-game on 14.4 attempts while shooting 46 percent from the field and 39 percent from the three-pointer. He’s also a career 80 percent free-throw shooter. He has improved his rebounding, passing and defense making him an all-around small forward. The bidding war last summer between the Jazz and Hornets proved his value in the NBA. The max contract he received is absolutely paying off for the Jazz, now he needs help around him. 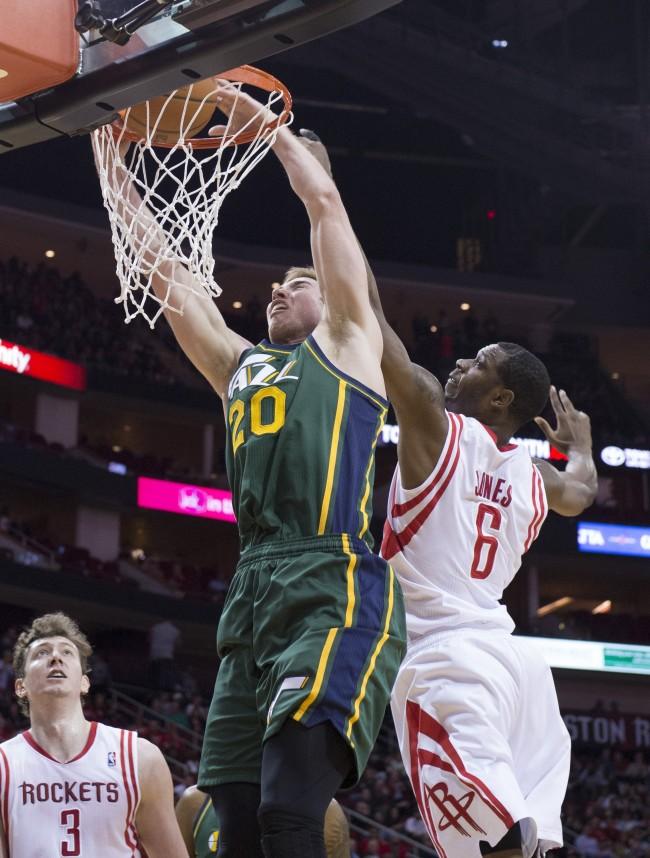 4. Carmelo Anthony: Despite the horrific season this year for the New York Knicks, Carmelo Anthony is still a top five small forward. All of the stigmas about Anthony, regarding his lack of ability to make teammates better has some merit but he’s one of the most prolific scorers the NBA has witnessed. From mid-ranges, post game, three-pointers and pull-ups, Anthony has the persistence to put the ball in the basket from anywhere which is a significant talent. There is not one owner or general manager in the NBA who would not want the offensive consistency Anthony has displayed through his career.

3. Paul George: George has not played one single game this year, so why is he on this list? This is why: 20-33 and 56-26. If you have not guessed, those are the Indiana Pacers records this year and last year. The disparity of not having arguably the best two-way player in the NBA is tremendously impactful and the Pacers are reaping those sentiments. Last year, if not for Paul George, the Pacers would have been swept by the Hawks in the first round. He willed a crumbling team, who ran out of gas, to the Eastern Conference Finals. George is the epitome of what defines a superstar. Sustaining the team USA leg injury only set him back, but Paul George’s return will be recognized around the NBA world.

2. LeBron James: Of course LeBron James is a top five small forward, but is he number one right now, the answer is no. James has not missed many games this year and the Cavaliers are the fifth seed in an abysmal Eastern Conference. For James to allow this level of complacency with the abundance of talent this team has its unacceptable. You can point fingers and blame others besides James, just like in Miami, but he has to be held accountable. LeBron is a phenomenal player and an eventual top 20 all-time player but at age 30 now, he needs to decide what role he wants to play for his team. Either allowing younger stars to contribute the nightly workload or keep doing it himself. 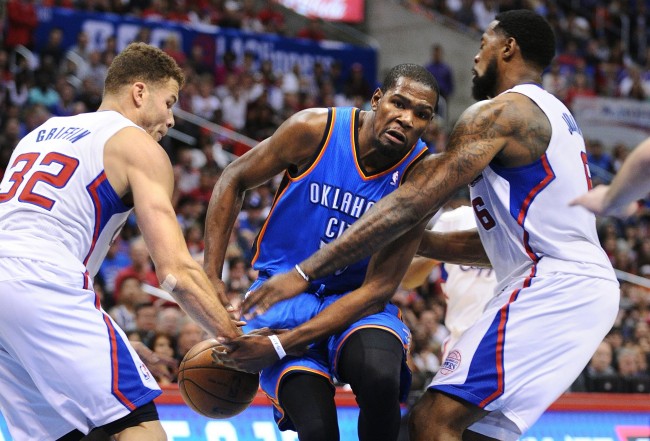 1. Kevin Durant: Kevin Durant is the best small forward in the NBA. The Oklahoma City Thunder looked like a lost franchise this year, without Durant, even with Russell Westbrook playing. They are a different team when he’s not playing and in the tough Western Conference it has shown. The reigning MVP, since returning one month ago, has elevated the Thunder only 1.5 games back of the Phoenix Suns for the eighth seed. His offensive repertoire mixed with an unparalleled consistency garners him this top spot. Last year when Westbrook was sidelined with injury, Durant proved without doubt he could handle his own team and keep them a championship contender. Durant has officially taken the small forward crown for the time being. 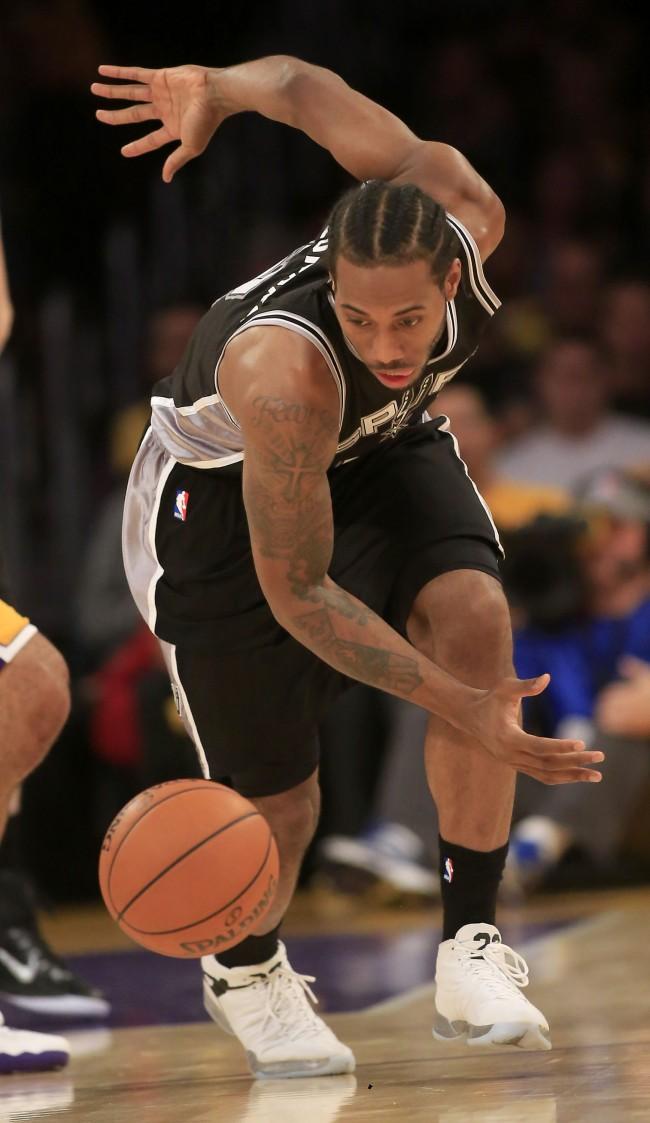 5. Kawhi Leonard: With the abundance of burgeoning young talent at the small forward position, this spot was almost up for grabs. But at the end of the day, it’s difficult to exclude the fourth-youngest Finals MVP in NBA history. Although he hasn’t been asked to do much offensively, he has still displayed his versatility on that end of the floor by demonstrating his ability to cut to the basket, take defenders off the dribble, and hit spot-up 3-pointers. Leonard has been able to do all that while being the fourth most important player on offense, more times than not. Furthermore, Leonard has seemed to handle his rising offensive responsibility well, as his player efficiency rating (PER) has risen every year, along with his usage rate. As a result, Leonard now leads the Spurs in scoring with 15.4 points per game, almost a three-point improvement over last season’s average. Regardless of his offensive impact, Leonard’s will always been known for his defense, and rightfully so. Leonard might be the best wing defender in the league, and if there any doubts about that, just see his performance against the Heat in last year’s finals, where he managed to corral LeBron James and make him labor for everything he earned on the offensive end. Leonard may lack highlight reel dunks or eye-popping statistics, but like the Spurs he just gets the job done. And the best part (or maybe the worst, depending on which team you root for) is that he’s only getting started.

4. Carmelo Anthony: A player must be really good if their name is mentioned in the same breath as LeBron James and Kevin Durant, in spite of not making it to the Finals in 12 years. However, that’s exactly what Anthony is, supremely talented, but not a winner. Not winning isn’t entirely his fault either, he’s mostly played on some average teams with second-round ceilings, but that’s not the point. The point is that Anthony succeeds in spite of his teams. This season, Anthony has a PER of 21.83, good for third among small forwards, only behind Durant and James. The fact that he can produce at the rate and efficiency he can, is a testament to his individual greatness. That greatness is never more evident than when he’s operating on the offense end, where he employs a multitude of spin moves, post-ups, pull-ups, and dribble-drives, to score. The amount of ways, and the fluidity, that Anthony can score with makes him one of the 5-7 best scorers in the last 15 years or so. Scoring aside, Anthony has been known to mail it in on defense some nights, which is why he isn’t higher on this list. But regardless of his occasional lackluster defensive effort, he has still proven that he is willing and able to carry a team on his back, as he is second among small forwards in usage rate (how involved a player is on offense). At this point, talent or scoring ability isn’t what’s holding Anthony back; it’s a decent team and some jewelry. 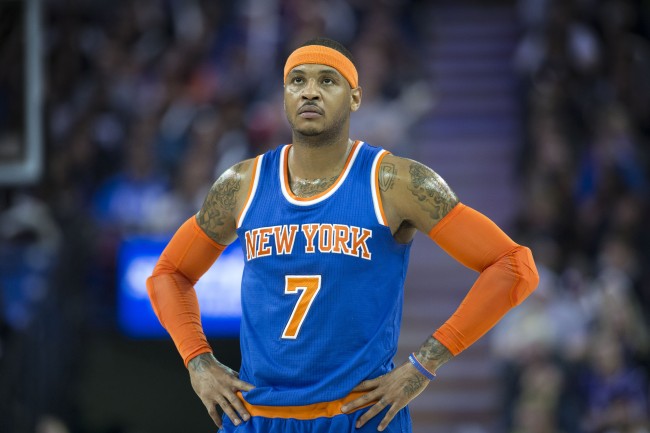 3. Paul George: It’s tough to put a guy who hasn’t played a single minute this season in the top 3, but if Paul George can come back and be 90-95 percent of the guy he was before that horrific leg injury, he’s still an elite small forward. Though he was a bit erratic shooting the ball last season, George displayed a wider array of offensive skills too. But George’s brightest spot isn’t his growing offensive repertoire, it’s his ability to play top-shelf defense. George is one of the few players in this league that are top-tier two-way players, meaning that he can carry a team on offense, but also shut down the opposing team’s best player on defense. I would be remiss if I didn’t say that George’s injury was a concern, considering the severity of it. But assuming he can make a full recovery, it’s not farfetched to think that he may rise on this list if LeBron or Durant decline rapidly and he takes the final step into superstardom.

2. Kevin Durant: Although the Thunder are currently on the outside looking in when it comes to the playoffs, it isn’t Durant’s fault, who leads all small forwards in PER. Furthermore, the wiry 6’9” forward uses his unlimited arsenal of offensive moves to dominate opponents. In spite of the fact that Durant plays with one of the more shot-oriented point guards in the league, he has still managed to score 25.9 points per game this season, on 51 percent shooting, no less. Even though Durant can dribble it between his legs, take a hard dribble and pull up from 30-feet away with ease, he still uses his physical advantage to get his teammates involved, averaging 4 assists per game this season. Just because Durant makes spectators swoon with his smooth-as-silk offensive game, doesn’t mean he ignores the defensive side of the floor. He might not be LeBron James or Paul George on defense, but Durant is still a very viable option, due to the wide variety of positions he can defend because of his length and quickness. Durant may not dominate all facets of the game like LeBron James can, but there’s no denying that he’s pretty close to doing so. Remember, he is less than a season removed from averaging 32 points, 7.5 rebounds and 5.5 assists per game and winning the MVP, and until someone dethrones him, we should still treat him with the respect that a reigning MVP deserves.

1. LeBron James: Four-time MVP, two-time champion, two-time Finals MVP, two-time all star MVP, 11-time all star, it would take days to finish listing LeBron’s accomplishments. But accolades are nothing compared to what James actually does on the court. Not only can James dominate a game and score on the offense end from all three levels of the floor, but he makes his teammates better too. James currently ranks second in assists by a forward in NBA history, trailing only Scottie Pippen by 17 assists. He may have been dubbed as the next Michael Jordan coming out of high school, but it is evident that he has a little more Magic than Michael in his basketball DNA, as evidenced by the 7.3 assists he’s dishing out per game this season. James’s brilliance reaches far beyond the offense end though, as he is one of the most versatile defenders in the league. With his unique blend of size, strength, and speed, James is equipped to guard any position from 1-4 with relative ease. Despite his physical dominance on the defensive end, LeBron’s high basketball IQ helps him put his teammates in advantageous positions, making the group as a whole function more smoothly. For instance, with James off the floor, opponents’ offensive rating is 111.1 this season, but when James steps on the floor, opponents have a more difficult time scoring, as their offensive rating drops to 105.3. Even at 30 years old, James is still a freak of nature who can do anything he wants on the court, and that not only makes him the best at his position, but the best player in the league. 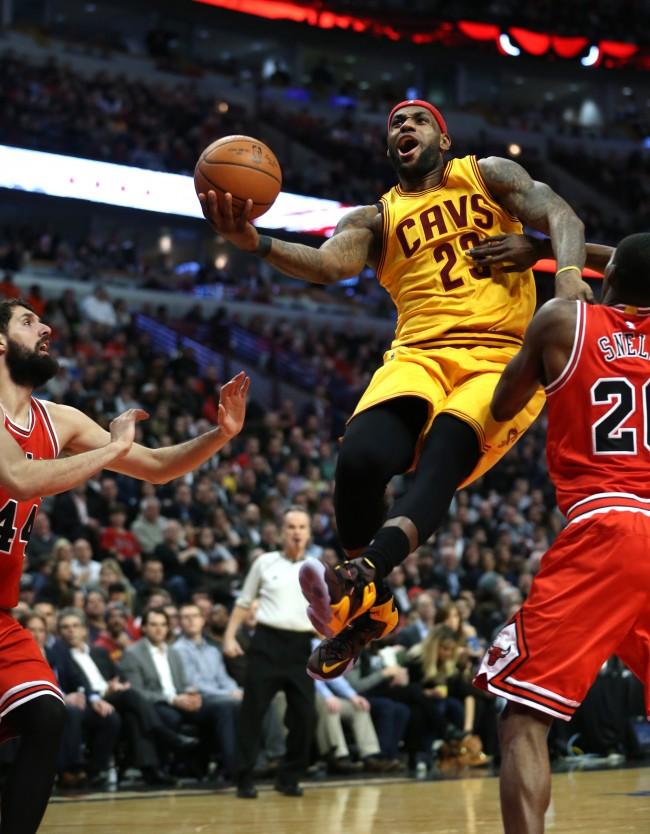