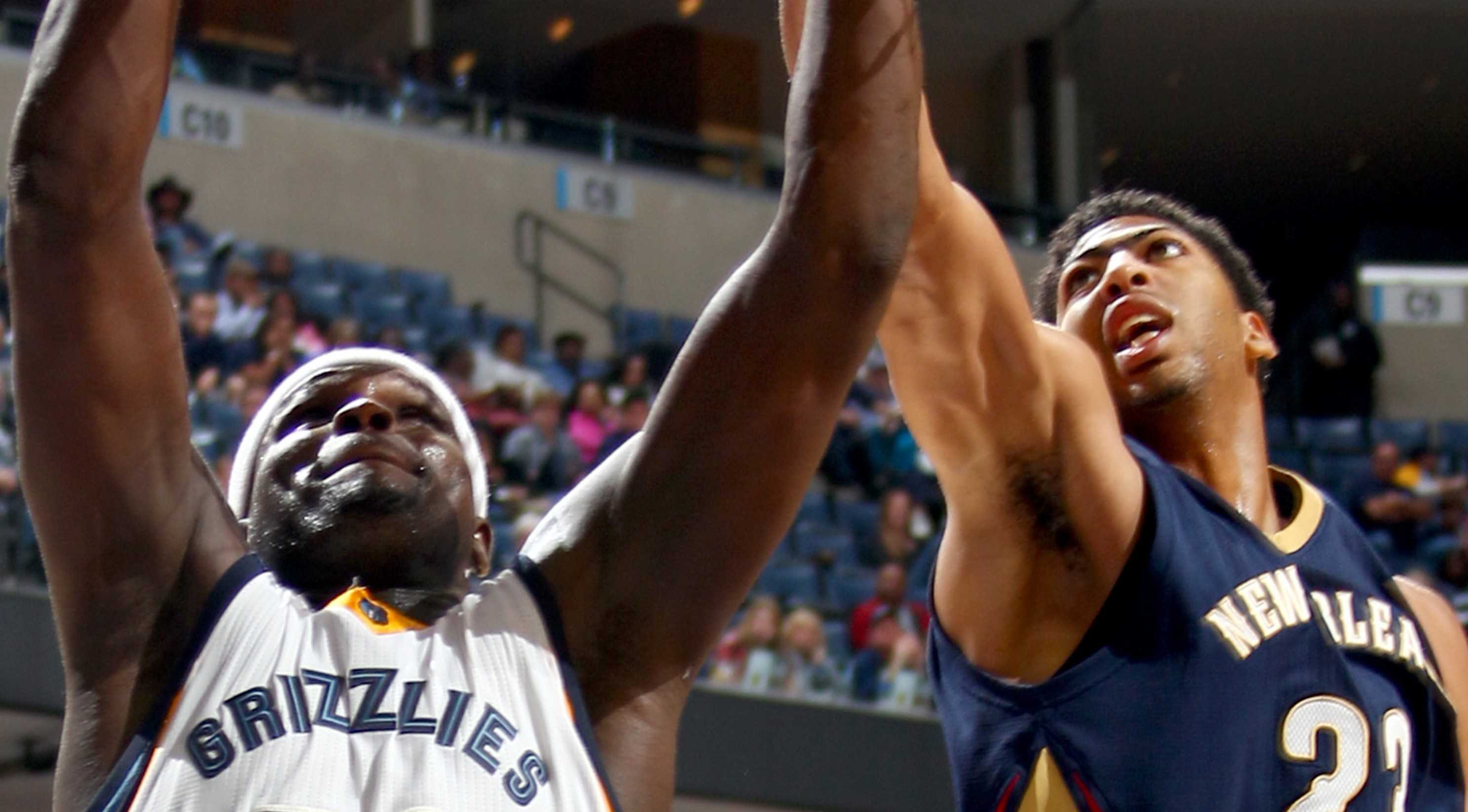 The last installment of J&J's Top Five NBA players is here, and this time, they're choosing their top five power forwards. Do you agree with their picks? Photo courtesy of Tribune News Services.

With the All-Star game starting tonight, Julius and Jordan bring you the final installment of J&J’s Top-Five. Power forwards wrap up their fun, but be sure to check out their other top five picks and tweet at them (@LasinJulius and @Golden_Jordan1) for any other top five lists.

5. Kevin Love: Though Love is not producing the inflated statistics we’re accustomed to seeing, he is still seventh among power forwards in points-per-game (17) and ninth in the NBA in rebounds (10.4). Dealing with limited touches and a new offensive scheme in Cleveland, his statistics are slightly down this year. The reason Love is still a top-five power forward is because power forwards in the NBA wish they had this type of “off” year. It’s easy to forget he was producing about 22 points and 12 rebounds per night. The Cavaliers would not be a championship contender without Kevin Love’s versatility. He’s the most lethal third option in the NBA at only 26 years-old.

4. Zach Randolph: Disregarding his season ending injury in 2011-12, Zach Randolph has consistently been top-five in double-doubles since 2009-10. When Marc Gasol had not emerged yet and Rudy Gay was injured, Zach Randolph led the eight seeded Grizzlies in a monumental upset vs the one seeded San Antonio Spurs in the 2010-11 playoffs. He averaged 22.5 points, 9.2 rebounds and 3.3 assists in the series. Randolph has been in the NBA for 13 years and things have changed, but his tenacity, persistent rebounding, and poise have always stayed consistent throughout those years. This year he’s averaging 16.8 points and 12 rebounds at 33-years-old. His top-five argument is in his production.

3. Pau Gasol: Similar to Randolph, Pau Gasol’s top-five worth speaks loudly through his production. This year he’s averaging 18.4 points, three assists and a career-high 12.1 rebounds-per-game. He’s been in the NBA 13 years, won multiple championships and at age 34 he can still be impressively unpredictable.. He’s top -5 in points and fourth in rebounds in the NBA. He’s the main reason the Chicago Bulls are third in the Eastern Conference because with untimely injuries from Rose and Noah this year, Gasol has kept the Bulls a competitive force to contend against. The Bulls are easily the winners of free agency and Gasol is padding his Hall of Fame credentials with remarkable consistency wherever he goes.

2. LaMarcus Aldridge: It’s hard to believe this is only Aldridge’s second year posting a double-double, but it’s true. The reason he’s second is for this exact reason. I have been critical of Aldridge for being a 6’11-7’0 big man who could not consistently rebound or attempt to get in the dirty areas and lately he’s been doing this. He’s always had an offensive game, but now his defense and rebounding are seeking the same attention as his offense. He’s top-10 in the NBA in points (23.6) and rebounds (10.3) all while securing the Trail Blazers with a 36-17 record, good for third in the Western Conference while heading into the All-Star break.

1. Anthony Davis: If Anthony Davis and the Pelicans were in the Eastern Conference, they would be the seventh seed and we would be talking about Davis for MVP. He’s the best Power Forward in the NBA by a wide margin. He’s top five in points-per-game (24.5) and eleventh in rebounds (10.3). If he didn’t miss a couple of games, due to injury, he would definitely be somewhere in the top 10 rebounds. His case for number one power forward is no longer the discussion. The discussion is now, is Anthony Davis already the best player in the NBA. The more you watch him, you realize that’s not an absurdity.

5. Chris Bosh: The perception of Bosh’s talent has eroded since joining Dwyane Wade and the Heat in the summer of 2010, but even at age 30 Bosh has proven he is still a top-tier front court option. With Dwyane Wade’s health issues and LeBron James’s departure, a larger burden has been put on Bosh to produce this season and he has responded with averages of 21.1 points and seven rebounds per game, while also posting a 19.98 PER. A closer look at his scoring statistics also shows that he has developed a more well-rounded offensive game as he is making 1.4 3-pointers per game on 37.5 percent shooting. Furthermore, Bosh also provides some versatility on the defensive end, where he can step out bother guards off of pick and rolls, as well as guard select big men in the post. Even though Bosh is nearing his decline, he still has shown that he is capable of providing leadership and flexibility for any team in the NBA.

4. LaMarcus Aldridge: For the better part of the last five seasons, Aldridge has toiled in obscurity while playing for an underachieving Trailblazers team. However, since Damian Lillard’s arrival, the Blazers have finally had some success, and as a result, Aldridge is finally getting the respect he deserves. But in the past five seasons, Aldridge has averaged at least 21 points and eight rebounds per game, including 23.6 points and 10.3 rebounds this season. Furthermore, Aldridge is one of the hardest forwards to guard as he possesses a wide array of offensive moves, including his patented fade away jump shot from the post that is almost impossible for opposing forwards and centers to block. At age 29, Aldridge is in the midst of his prime, and when he hits the free agency market this summer, teams will rush to nab the elite forward.

3. Pau Gasol: It’s hard to believe that Gasol is already 34, but even at that age, the former Laker is still outplaying most of his younger counterparts. After being misused and mistreated during the final three years of his tenure in Los Angeles, Gasol has had a rebirth of sorts as a member of the Bulls. Since trading in purple and gold for red and black last summer, Gasol has found an offensive groove, averaging 18.4 points per game this season, his best mark since the 2010-2011 season. Gasol’s reemergence hasn’t only been limited to the offensive end, as he is averaging career-highs in rebounds (12.1) and blocks (2.1). After escaping the dumpster fire that the Lakers have been recently, Gasol seems to have found a sanctuary in Chicago, and by being surrounded by talents like Derrick Rose, Jimmy Butler and Joakim Noah, Gasol is once again able to showcase the unique set of skills that make him an first-rate power forward.

2. Blake Griffin: On-court demeanor and flopping aside, Griffin has to be recognized as one of the two best power forwards in the game. Griffin is currently second among power forwards in PER, posting a 23.15 rating, while also having the highest usage rate (how involved a player is on offense) among those at his position. In addition to his PER, Griffin has demonstrated that he is an adept scorer, averaging at least 20 points per game during his whole career, with the exception of 2012-2013. Over the past couple seasons, Griffin has also been able to diversify his game past just show stopping dunks too, as he has extended his range to the 15-18 foot range. Griffin isn’t all about scoring either because he’s the 7um,best passing power forward in the league. Many teams double team Griffin because of his effectiveness in the post, and Griffin has been able to pass out of double teams and consistently find open shooters. However, not all of his assists don’t come from half court sets either. When he is able to get a steal or rebound, lead the break himself, and find his teammates for transition dunks. Although Griffin has seemingly taken a step back rebounding this season, a lot of that can be attributed to having the league’s best rebounder playing right next to him. At this point, it seems like everyone has created impossible expectations for Griffin, so that a stat line of 22-7-5 is “disappointing,” but power forwards that post up like centers and run the break like point guards, don’t grow on trees.

1. Anthony Davis: We may need to check the validity of this guy’s birth certificate because it’s tough to believe that a 21-year-old can be this dominant. For instance, Davis leads all players at any position by a fair margin with a player efficiency rating (PER) of 31.86. In addition to his efficiency, Davis is an absolute nightmare on defense by using his massive wingspan and mobility to average a league-leading 2.7 blocks per game, while also being second among power forwards in steals per game with 1.54. On the offensive end, Davis leads everyone at his position in scoring, averaging 24.5 points per game, even though he is still developing skills on that end of the floor. We haven’t seen a player this precocious since a young LeBron James, and if he can stay healthy this double-double machine may be a dominating force that the NBA has never seen. But for now, I guess we’ll have to settle for him being the best power forward in the league.