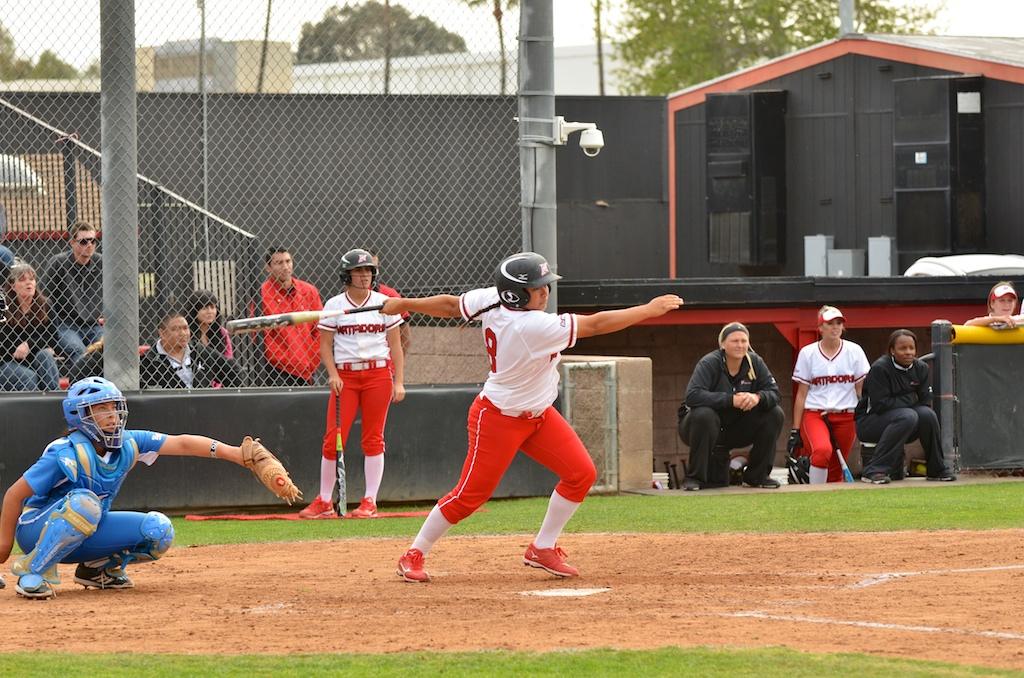 After sweeping their competition on the first day of the 2015 DeMarini/Desert Classic, the Matadors (7-2) split their pair of games on day two with a 12-5 win against Indiana University Hoosiers (2-6), followed by a 8-0 night-time loss to the University of Utah Utes (5-4).

The Matador’s bats proved too much for Hoosiers starting pitcher Lora Olsen to tackle, tagging the senior for 12 runs and 13 hits over six innings, including four home runs to cap off a rough outing.

CSUN started the game off hot plating four runs in the first inning. Sophomore left fielder Taylor Nate was responsible for two of the runs, courtesy of her first home run of the season. Nate finished the game with a full stat line, including three hits on five at bats and three RBI.

The home run parade continued in the second inning. Sophomore center fielder Taylor Glover cranked the first of her two home runs in the game to deep center field to push the lead to five. Nate followed with her third RBI of the game, scoring sophomore catcher Katie Hooper.

The Matadors lead looked to be in jeopardy in the fourth inning. Senior pitcher Crystal Maas gave up a home run to Indiana sophomore second baseman Kassi Farmer before being pulled for freshman standout Zoe Conley. The Hoosiers would tack on three more runs to bring the Matadors lead down to one before the end of the inning.

Unfazed, CSUN went on a tear in the sixth and seventh innings adding six more runs to their lead for a final score of 12-5. Glover and Hooper both homered in the seventh inning to put the proverbial nail in Indiana’s coffin.

The Matadors had their best game of the young season on the base paths. CSUN tormented the Hoosiers defense to the tune of eight stolen bases. Six different Matadors would swipe a bag in the contest, including two by Nate.

CSUN suffered an 8-0 loss against the University of Utah in the second game of the their two game set. Officials called the game in the fifth inning per NCAA mercy rule regulations.

Senior Pitcher Briana Elder had her worst outing of the year. The talented pitcher only managed to record one out due to a sacrifice fly before being pulled for Conley. Elder finished the day with four runs allowed on a third of an innings work. Maas and sophomore Daphne Pofek both saw time on the mound following Conley’s departure.

At 7-2, The Matadors are off to their best start since 1996 and are currently tied with Cal State Fullerton for first place in the Big West. CSUN’s time in Las Vegas will conclude on Sunday after the Matadors take on their second Utah school in as many games, the Utah State Aggies (0-7), at 11 am.