Prepare for drum solos, the Champions League is back 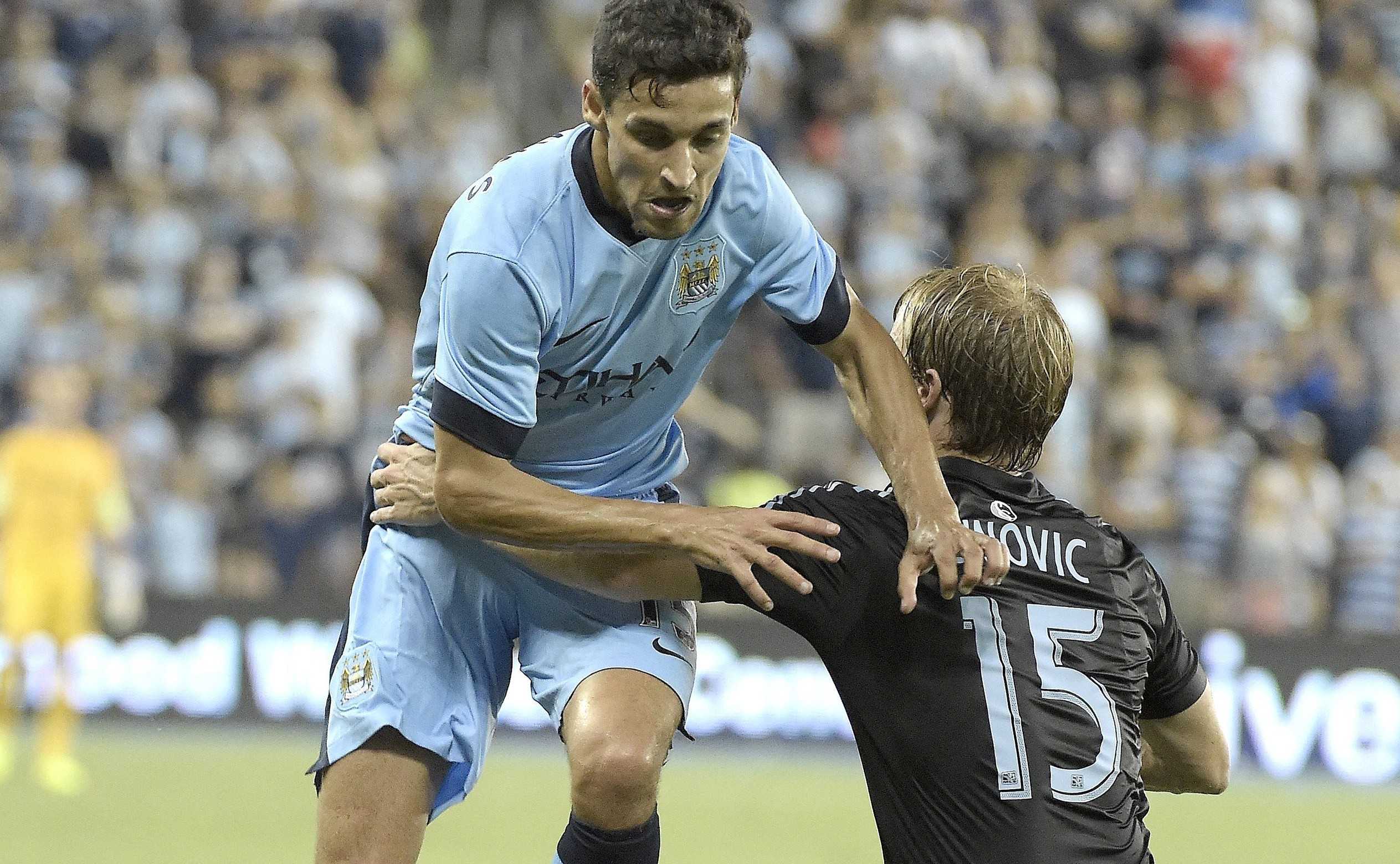 Manchester City winger Jesus Navas will bring it his all against Barcelona to avenge their defeat from last year's first round exit. Photo courtesy of Tribune News Services

Oh the feeling of hearing that glorified, operatic tune once again. The vivacious strings in the background and the epic choir surely knocks your socks off every time it comes on. And who can forget about those constant Heineken commercials?

If you know what I’m talking about, you’re as excited as I am that the UEFA Champions League is back this week, with games starting on Tuesday, February 17. Yes, the greatest soccer competition right behind the coveted FIFA World Cup has returned after its break over winter, and it’s surely going to bring some drama as the knock-stages begin. Here’s a preview of what’s to come, who is predicted to slide through to the next round, and to possibly lift the cup come May.

Two former champions kick off the first day of the knockout rounds as 2013 champions Bayern Munich face the Ukrainian Premier League Champions Shakhtar Donetsk, while 2012 champions Chelsea are pitted against Ligue Un Champions Paris St. Germain. This can be an interesting first day.

As much as I’d love an upset from the Ukrainians, this Bayern Munich side is not going to let anything slide. After a demoralizing defeat in last year’s semifinals against the defending champions Real Madrid, Pep Guardiola and his Bavarian side are looking to avenge their loss and lift the cup once again. The Bundesliga just came back from their long winter break, and the German champions have bounced back from their 4-1 loss to Wolfsburg and 1-1 stalemate to Schalke and have scored 10 goals and conceded nothing in their last two games. Shakhtar, on the other hand, have been on fire in the Champions League this season, with the help of their top goal scorer Luiz Adriano. Munich has proven to have tough times in frigid games, losing 3-0 to BATE Borisov in the past and struggling for a 1-0 win against CSKA Moscow this season. But since this is a two-legged match up, the Bavarian won’t have much to worry about, and they should have no problem moving on to the next round.

The other match of the day is a rematch of last season’s quarterfinals, with the Parisians facing the North London side in the first round instead. Chelsea broke through to last year’s semifinal thanks to their away goal in the first leg, but it will be much harder for the Blues this time around. PSG has not only improved on their experience and its quality, but it has also solidified their defense and have turned it into an all-Brazilian back four at times. Not to mention this is PSG defender David Luiz’s first game against his former side since he made his big money move over the summer. PSG has been slumping in its domestic league as of late, not able to produce the goals to give them their much needed wins and coming in third in France as they enter the European knockout stages. And with Chelsea’s solid defense and its star striker Diego Costa proving to be unstoppable, this will be an interesting one. I’m hoping PSG will continue on, but with the form it’s in, Chelsea has a better chance of grinding out another quarterfinal berth.

This may turn out to be a dull one, as the defending champions Real Madrid face Schalke for the umpteenth time and lowly Basel and Porto showcasing a hard-fought game for the first time in their histories. I won’t have much to say on this, because, frankly, it’s not all too appealing.

Basel and Porto face each other for the first time ever. This is the most interesting match up because it can go either way. It’s a toss up, considering how consistent these teams have been with average teams (aka the teams that aren’t Barcelona, Real Madrid, Bayern Munich, etc.) Basel reached this stage after finishing second in its group that consisted of Real Madrid, Liverpool and Ludogorets. After all the hype of Liverpool’s return to European contention and falling short of making it out of the first round, the Swiss side has definitely earned their spot in the knockout rounds. But this F.C. Porto side isn’t one to blow off either after topping their group. Led by star striker Jackson Martinez, the Portuguese club will surely give Basel a tough time over two games. That’s not to say that Basel will have it easy either, making this game really hard to call. Betting on Porto for this one.

Last season, Los Blancos dismantled the Germans 9-2 over two legs in the same round. It just feels like UEFA has fixed the drawing to have this game pop out year after year, and gift Madrid another easy win. All the credit to Schalke, but they haven’t had luck on their side against their opponents at all. Not to mention the amount of firepower that Madrid acquired over the summer will surely make this fixture produce more goals than previously seen. Although Madrid has had a terrible start to the year after winning their first ever FIFA Club World Cup, Cristiano Ronaldo and co. shouldn’t have a problem taking care of business come Wednesday afternoon.

This is the juiciest day of them all. Struggling Dortmund versus the untouchable Juventus. A possible Yaya Toure-less Manchester City against a Barcelona side quickly hitting their stride after club turmoil. These teams have everything to prove, so just getting out of this round will mean more than any other team.

Juventus has been hitting its stride in the Serie A, and the Old Lady is still at the top of the table since the beginning of the season. That’s not much to say though. The Italian league has definitely weakened over the last decade, and traditional rivals in Milan and elsewhere are not the same challenging powerhouses as they used to be. So Juventus will have to keep their guards up in the Champions League if they want to win it for the first time in over a decade. And that’s where Dortmund comes in.

The Yellow Submarine has had a disaster of a season in the Bundesliga, fighting in the relegation zone for the majority of the season (I didn’t think I’d ever write that). Juergen Klopp has had to deal with injury most of the season, but with the quality and depth he’s had over the last few years, that shouldn’t be much of an excuse. Regardless of their form in Germany, they have been near flawless in European contention, and with all their players back healthy and regaining form, this Dortmund side should experience a resurgence sooner than later, especially after convincingly winning their last two games 3-0 and 4-2. This is a tough one, but I think Borussia Dortmund will have way more heart to be counted out. The Germans will pull through.

The other match up? A repeat of last year’s round of 16 bout. Barcelona takes on Man City once again, and hopefully this time, it won’t be a snooze fest. With the Citizens currently struggling to find form in the EPL without their midfield general Yaya Toure, this seems to be a game Barca will ease through smoothly. Man City has not won a game since the Ivorian’s departure in the beginning of January for the African Cup of Nations, and with his vacation rolling through the first week of the Champions League, Manuel Pelligrini needs to fix his side’s composure as soon as possible. Barca have been red hot since the new year, recently dismantling Levante 5-0 and taking over the Copa del Rey from Atletico Madrid. They’re hitting their stride at the right time after such a demoralizing start of the season. Nevertheless, City should not be counted out. Their team is good enough to score any time, especially with Barca’s shaky defense. But, the more Barca concedes, the likelihood that the South American Trident will score more is at an all time high. Luis Suarez, Lionel Messi and Neymar have been producing goals like they should be, and it’s not going to stop in Europe. Barcelona will advance easily.

With Tuesday being such a great match up, the Wednesday fixtures seem a little bit lackluster. But don’t underestimate the quality of the sides.

The 2014 runner-up squad in Atletico Madrid has lost plenty of players, including star striker Diego Costa to Chelsea. You would think they would have tumbled into oblivion like Dortmund has, but Diego Simeone has kept the La Liga Champions in contention with the addition of Mario Mandzukic and Antoine Griezmann. Atleti have had a great start to the season in Spain, doing away with their cross-town rivals in the Copa del Rey. Their group stage form was not too convincing, but they made it out on top over Juventus. The rojiblancos may have stumbled over the weekend in their 2-0 loss to Celta Vigo, but they should be fine dealing with their German opponents, Bayer Leverkusen. The Germans played a hard-fought game on Valentine’s Day, losing 5-4 to Wolfsburg and are currently on a two-gaming losing streak. Sitting in sixth in the Bundesliga, if Dortmund wasn’t having such a meltdown, this team would be the weakest German side in the CL, and I believe Atletico will have no problem brushing them aside to go into the quarterfinals.

Arsenal and Monaco isn’t as lopsided as the other match-up of the day. The Gunners have been hitting their stride in England, taking care of the FA Cup and their PL fixtures with ease. The returning injured players have been key to their success. Alexis Sanchez has been the talk of the town, and very much so. But the London side hasn’t played with a healthy squad until just recently. With Ozil, Cazorla and others coming back to give strength to the midfield, Monaco will have a hard time adjusting to their English rivals.

But that’s not to say that Monaco is an easy ride either. With the departure of Falcao to my beloved Manchester United, Monaco has been turning heads in the CL. Although their opponents in their group wasn’t as challenging as the others, this is an impressive run considering it’s their first taste of European play in ten years. Monaco is sitting in fifth in a weak French league, but they shouldn’t give the Gunners an easy path to the next round.

Those are my picks for the first knock-out rounds of the Champions League. Do you agree with it? Tweet your opinions @reportervince, and make sure to tune into this week’s Stoppage Time podcast on Thursday as we recap this week’s games and give you predictions for next weeks fixtures.