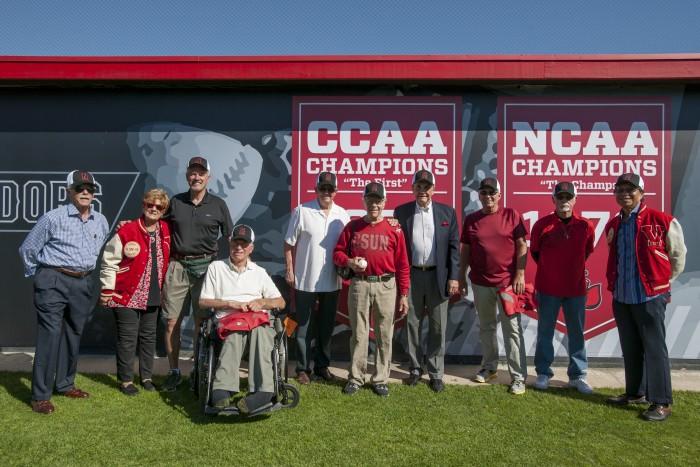 It wasn’t a normal start to CSUN’s baseball game this Sunday afternoon as the Matadors defeated Gonzaga 5-1.

The undefeated Matadors started off their game with a little trip down memory lane.

CSUN began with a tribute to the 1965 San Fernando Valley State Matadors for their 50 year reunion. Stan Charnofosky, now a faculty member at CSUN and the 1965 Matador coach, and the rest of the team were being honored for their memorable first championship win, becoming the first team to hold the CCAA title. The honorees received a commemorative fleece.

The Matadors wanted to show their appreciation for the first champions, especially as the current CSUN side got ready for their fourth win—making their beginning season one of the best since 2002. Already with their 3rd win under their belt and playing with confidence, Matadors’ defeated Gonzaga 5-1.

Junior right-handed pitcher Angel Rodriguez ended Sunday’s game as the MVP. Rodriguez went undefeated with five batters and only let one run from Zag against him.

Rodriguez started off slow but steadily increased his consistency and power throughout the game. This helped his performance against the Bulldogs and the Matador’s overall victory, landing him as the first Matador this season to have a complete game.

Other key players from Sunday’s afternoon game, junior infielder Yusuke Akitoshi with a first and second run, followed by junior outfielder Spencer O’Neil. With senior utility player Nick Blaser ready to hit, his teammates saw this as an opportunity to steal bases, giving Akitoshi room to continue onto home base. Next, after Blaser’s fly ball, O’Neil proceeded to make it home following Akitoshi. Senior infielder Ryan Raslowsky’s low ball in the 5th inning started him off with a run into 3rd base and moved Matadors Chester Pak to home base.

With Rodriguez’s complete game and consistent scores from the other players, their smooth streak will hope to continue into Tuesday’s game against UCLA.