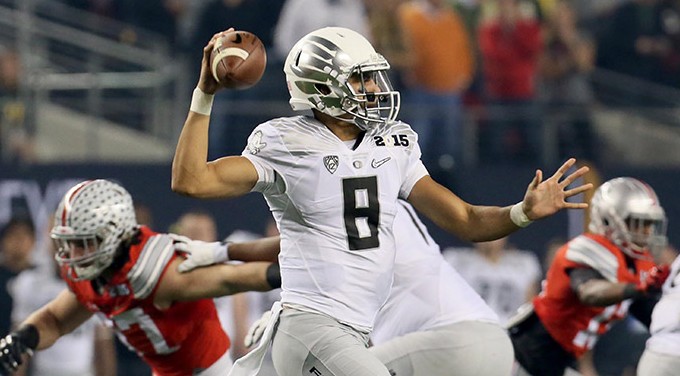 Oregon quarterback Marcus Mariota drops back to pass during the first quarter of the CFP National Championship on Monday, Jan. 12, 2015, at AT&T Stadium in Arlington, Texas. (Bob DeMay/Akron Beacon Journal/TNS)

Players whose draft stock will rise

Fowler already said he is going to compete in every drill at the combine. Talent evaluators always put their eyes on the pass rushers, and Fowler is expected to shine with the spotlight.

Not only is he athletic and explosive, but at 6 feet three inches and 265 pounds, he has size to play defensive end or stand up defensive end. He will not only test well but should also show his fast twitch and mobility in the position drills. Fowler’s versatility and ceiling will leave teams drooling and his draft stock rising as high as the top five.

Is he a safety? Is he a linebacker? Is he a running back?

No one is sure, but with four defensive touchdowns and more than 400 rushing yards last season, Thompson is no doubt a football player. He will display his ball skills and fluidity across drills, and will remind scouts that he is a one a kind athlete.

At the end of the day, Thompson will display why you can tailor a defense around him. He could easily climb into the top-10 picks because barring a horrible performance.

Alabama’s Amari Cooper and West Virgina’s Kevin White are currently battling it out for the No. 1 and No. 2 receivers depending on what draft guru you listen to.

Parker has only dropped three passes since 2012 but he must display good speed as well acing the interview process to climb within the top-10 draft picks.

Players whose draft stock will fall

The biggest knock on Cooper has been something he can not change — his 6-foot-1-inch stature. Fellow receivers White and Parker are big bodied and size is a hot commodity.

Sammy Watkins dealt with a similar draft plateau after the combine when Kelvin Benjamin and Mike Evans took over the limelight. Still, I do not expect Cooper to fall far as his production and game tape speak for themselves.

With so much talent within the middle of this year’s running back class, Gordon’s stock will fall after the combine due to the likes of Duke Johnson, T.J. Yeldon, Jay Ayayi, and Ameer Abdullah.

Due to the devaluing of the running back position, there will most definitely be a run on backs in the second to fourth rounds. Junior Georgia running back Todd Gurley could cement himself as a first round pick if he shows his knee has healed faster than expected.

As pass rushers like Fowler and Randall Gregory impress in tees and shorts, Ray’s draft stock will Tape wise, he is favorably the best pass rusher in this draft. However, he lacks size and has been compared to Baltimore Ravens linebacker Terrell Suggs. His play against the run will also be scrutinized.

Players with the most to prove

Peters captured headlines last season for all the wrong reasons last season as he was he dismissed from the team early in the season.

Still, Peters is by far the best cornerback in this draft. Where he gets drafted will depend on how well he does in the interviews. Everyone will ask him about his dismissal and it is Peters’ job show he has matured.

Winston has been vying for the No. 1 overall pick alongside Oregon quarterback Marcus Mariotta and how he interviews and performs will be crucial.

Last year, Vic Beasley would have been a top pick if he didn’t elect to stay in school. Still he composed 29 sacks in his career at Clemson. Pass rushers are always at a premium in the draft and they will be looking into Beasley’s frame.

At only 6 feet 3 inches and 235 pounds, questions remain about the seniors size ability to play the run and whether he’ll play defensive end or linebacker. The combine offers Beasley the perfect opportunity to remind people why he should be among the first pass rushers taken regardless of his size.

For more about the NFL Combine going on this week, check out the Sundial’s Fourth & Forever podcast, and follow Pete D. Camarillo @Petecertified.