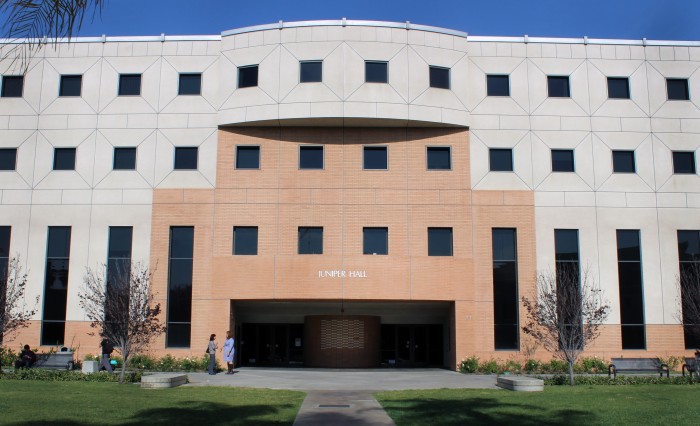 The College of Business and Economics says they will spend the donation made last year by David Nazarian to fund a slew of new programs, including new classroom technologies, a reinvigorated real estate program and an new minor.

Nazarian has pledged to give the $10 million donation to the college over the coming years and has also promised to help raise an additional $15 million from other sponsors the returns from which would be used in perpetuity.

“He’s bringing a lot of his networks to the table and [is] just being incredibly generous, not only with his resources but also with his time,” said Kenneth Lord, dean of CSUN’s business college.

The donation was made after the college created a new strategy which would support successful programs and develop new programs that focus on student-professional development and career services.

“It’s not a restricted gift,” Lord said. “David’s expressed intent has been to support the college’s strategic priorities.”

Lord says that the money isn’t earmarked for any particular program but rather as the college’s priorities change they can move the donated money around to fund any of their programs.

The new minor is an entrepreneurship program that would be available to help students in other fields. Nazarian says entrepreneurship is particularly important to him because it raises awareness of success of CSUN student’s throughout Los Angeles and at a national and international level.

“A big part of our community is startups and small businesses, and having our students ready for that can be a great help,” Nazarian said. “We want to expose to our community what a jewel CSUN is, and that they’re not appreciating the great talent we have.”

Nazarian is also working with the college to increase international opportunities for students.

Along with increase the colleges exposure some of the donation money is currently allocated for programs that plan to help minorities and women in the business field. Currently the college is developing a mentoring programs called the “Women in Business” event which invites women to the campus to network and give advise to students.

Angella Nazarian, Nazarian’s wife and author of the books, “Life as a Visitor” and “Pioneers of the Possible: Celebrating Visionary Women of the World”, is herself a contributor to the “Women in Business” program.

“She’s a big philanthropist herself,. She has founded a few very reputable and great achievements and causes. She’s writing her third book and she gives a lot of lectures about the role of woman leadership,” Nazarian said. “The big picture is that we work together and we brainstorm together. She’s been a huge part of it. In some cases, she has a better track record than I have, so hopefully we do a lot more.”

Cathleen Fager, manager of academic resources for the college, says that the expected returns from the endowment would be around four percent a year, but could fluctuate based on market conditions. The first returns will be received this summer, but initiatives have been put into effect in anticipation of the income if you are referring to the donation than say donation instead of income.

“We have already implemented aggressive and somewhat costly initiatives that would have been years in the making without Mr. Nazarian’s generosity,” Lord said.

Two classrooms have already been updated to accommodate seminar-style lectures, and the finance software, Telemet Orion, was purchased for all computers and labs in the college.

“What that enables us to do in terms of financial analysis is amazing,” said Lord. “This puts us on par with the top universities in the nation in that capacity to really prepare students for the sophisticated work that they’ll be doing in their finance careers.”

The renaming of the college also gives them a chance to work on branding to improve the reputation of the school in light of these new programs, Fager said. If the college is well-known as one of the top schools in the country, the value of the education increases for students.

“If the brand name of the David Nazarian College of Business and Economics is well-known, regionally and across the nation, then the value of the education that our business students get increases,” Fager said. “You want to go to a place that people have heard of, and can say ‘oh, they have a good business program’, and I think that we have a good reputation but we need to sell it more.”

She said that it can increase the number of faculty they are able to hire and if enrollment increases, they will be able to expand their existing programs.

“It is an honor for me. It is something that is a legacy,” Nazarian said. “It puts a lot of weight on my shoulders to really provide for our students. Every day when I wake up, I think ‘am I doing my job right? Am I doing the best thing?’ I don’t take it for granted, and every day I know I need to make a huge impact at this school.”

The campaign has already raised an additional $6 million, and Nazarian is confident the endowment will have $18-$20 million by the end of the year.

“The bigger donors that come up, I personally sit with them, I personally try to educate them about CSUN. And, there are some that are alumni, so they really understand the value of state schools and the great education that CSUN provides,” Nazarian said. “When the momentum comes together, things go a lot easier. A lot of good and capable people are working very, very hard.”

Naming the school, he says, also gives it a sense of security in financially difficult times like recent years. Students, investors and business leaders can see the school will have support and that its programs will not go wanting.

“Really, where I can make the biggest impact, in the school, in my life, it’s CSUN. As we looked at the business plan, it was so much of what I want to do with the school. So seeing that plan and what I had in my mind, it was very easy to buy into it,” Nazarian said. “We need to be able to execute because if we raise this money and in the end our students are not better off, game’s over.”