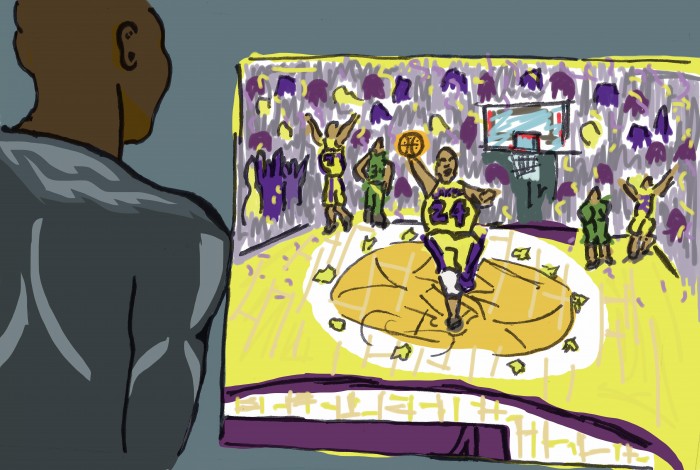 As seasons go, so does Kobe Bryant’s filter.

His name alone is polarizing, but the things he says have always been a topic of discussion. Who truly knows who Kobe Bryant really is?

Now an injury-ridden,19-year vet, we have seen the peel on Bryant toward the media; once slightly torn, completely ripped off. Case in point, Bryant sat down with NBA TV’s Ahmad Rashad to discuss the totality of his career, as well as what is to come next.

Let’s break down the Q&A and analyze Bryant’s words on Shaq, Michael Jordan, the Lakers and his NBA future.

Ahmad Rashad- Were you guys friends?

AR- What was the problem? Why couldn’t you coexist?

KB- I’m obsessive and I believe we need to work night and day, figure out how to get to where we need to go, and he wanted to do it the different way… There was a constant challenge, but I wasn’t going to back down, neither was he.

This is why basketball fans should appreciate Kobe, where the competitive drive and work ethic of a 22 year old, the persistence for excellence, out-weighted the force of a mountain Shaq was before and during his Laker exit. The organization saw more drive in Kobe, and were begrudged, but delighted to show Shaq the door. A move that undoubtedly paid off.

Kobe B- Oh yeah that’s the challenge. I wasn’t some sidekick. It’s silly you hear, “be selfless.” Alright, (we) win a championship, (then you hear) “you cant win one on your own!” Huh? What happened to being selfless?

Kobe calling out the media and fans for their lame narratives is epic, and totally called for. How many times do you hear “Jordan did it alone!” Um, was Scottie Pippen out every finals Jordan won, what did I miss?

Kobe is intense but the selfish narrative has always been played out. Bryant for obvious reasons, can be a good teammate, if the talent around his is worthy. When he’s had sufficient teammates, the results are staggering.

AR- People talk about your relationship with Michael Jordan… The time at the Forum, Phil had Michael come to the game, you remember that?

AR- There was a silent moment, and then we (Ahmad, Phil and Jordan) left. We walked out the hall and Mike goes, “I love that dude man, he’s a warrior.”

Probably one of the better moments of the interview, when Ahmad relived Kobe meeting Jordan following a Laker game at the forum. This moment was also within Phil Jackson’s book Eleven Rings, highlighting the pure competitive drive pouring out of a young Kobe, so similar to that of Jordan.

KB- How technically sound Michael was. It’s one thing to watch him play, it’s another to play against him. His technique was flawless. I wanted to make sure my technique was just as flawless.

KB- That was very inspiring for me.

This was pretty damn cool. The audio was clean on both Kobe and Michael, listening to Jordan mutter as Kobe stared aimlessly toward the crowd and absorbing all of Jordan’s words as delicately as possible.

Kobe has always shown great respect for Jordan, as any NBA player should, but the difference was Kobe’s ability to relate to Jordan, not only respect him.

Ahmad Rashad- Did you set goals when you started in the NBA?

Kobe Bryant- It was simple for me: win as many championships as possible. Growing up that was the standard. I watched Magic (Johnson) win 5, and watched Michael (Jordan) win 6.

What’s next to come

AR- (At this stage in your career) Do you change your game?

KB- Yeah, you adjust. …There have been plenty of players in the league that haven’t had that speed or athleticism but have still been able to dominate so why cant I?

AR-(But) Kobe Bryant has no patience

KB- Sure I do. I have strategical patience

Kobe is being very honest here and agreeing that his game has been diminished. The thing is, even with a diminished athletic ability, Kobe still has the mental capacity to control and manipulate the court to his advantage, given the situation around him.

AR- Do you see yourself going through another season as tough as the last two have been?

KB- I mean, no, but what choice do you have?

KB- Their expectations will never be higher than my own. Never. Never, never, never.

As much pressure as fans can put on Kobe, only he knows the countless hours of self criticizing and critiquing he expounds upon himself. I’d guess a lot.

AR- Any silver-lining the last few years because of the injuries?

KB- I’ve had an opportunity to sit and think about whats going to come next. As you get older you start finding the beauty in stretching, the ice pads, the eating healthy, you see it from a 360 perspective and you start trying to find the love in that, which is completely different from being 21.

AR- When is the end?

KB- I wonder too, when do you know?

AR- If one of your arms fall off? (laughs)

KB- (Laughs) Thats a good indication, hopefully that wont happen, we’re getting kind of close now… Even then I can still play with one hand.

Kobe- When the end comes I’m fine with that. I’m not afraid of change, evolving.

That final exchange sums up Kobe’s passion for the game perfectly, even a limbless dude would mess around on any given night, any squad and sniff a triple double.

With age and injuries, perspective has changed the man we’ve seen torch the NBA for over 19 seasons now. Learning the necessity for patience and recovery, if there are any future relevance in the league is possible, it will be Kobe’s guidelines to success in the seasons to come.

For so many, the Mamba will always be a vicious assassin, lethal from any area code on the court and with footwork envisioned and chiseled from the footprints of Jordan’s craft itself.

We have seen a young buck straight from high school become one of the greatest players in basketball history. What comes next, we’ll have to wait patiently to see. But no doubt from me: a determined Kobe should work his way back into basketball contention.