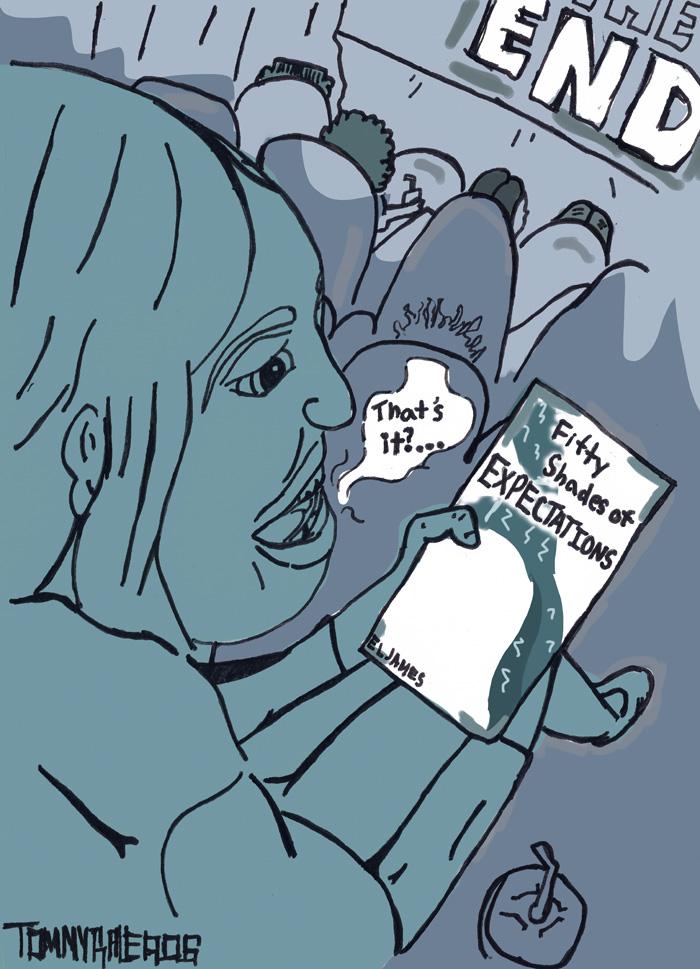 After months of steamy trailers, “Fifty Shades of Grey” has hit the big screen. If you were looking to come out the theater fanning your heated face after watching the sexy film, you will be sorely disappointed.

While the wildly popular book by E.L. James is almost entirely filled with sexually explicit scenes, the film has so few they amount to about only 20 minutes, and the rest of the hour and a half are random themes trying to form a plot.

Director Sam Taylor-Johnson (“Nowhere Boy”), tries hard to amplify the romance between witty and shy Anastasia Steele, played by Dakota Johnson (“21 Jump Street”), and kinky billionaire Christian Grey, played by Jamie Dornan (“The Fall”). However, that is lost because the film is everywhere.

In the book, the relationship between the couple is a heaping ball of sexual tension, but none of that is executed in the film. With so much going on, anticipation was left in the back burner making the meeting and eventual coupling of Anastasia and Christian hurried and awkward.

The pair first meets when Anastasia interviews Christian by chance for her college newspaper. She sees this confident and attractive man, while he sees his next sexual plaything he can’t stay away from.

The first 20 minutes of the film are full of impromptu meetings between the two until he presents her with a contract asking her to be his submissive, and he her dominant. They go forth with it somewhat, but Christian’s dark past prevents him from getting closer to Anastasia.

Taylor-Johnson does wonders in making the steamy “love” scenes between Johnson and Dornan tender by simply focusing on the actors’ faces, capturing their emotions through their love-making. The sex scenes weren’t the typical ones you get in any other movie, what with Christian’s playroom full of all kinds of sex toys.

Even so, with the expectation of the raunchiness of the film’s sex scenes, Christian’s natural sexual deviances made these moments believable. It is unfortunate so little of what the franchise is known for actually appears in the movie, and instead, the focus goes to the non-existent romance. If the only thing the book is known for wasn’t going to be at center stage, than whatever Taylor-Johnson was going for should’ve been clear.

While Johnson looks much older than the 22-year-old Anastasia, her portrayal of the character was perfect. The character may be shy, clumsy and sometimes even bland, but Johnson flaunted it. Unfortunately, Dornan’s only acting skills come from T.V., which is apparent. Dornan’s attempt at Christian’s hard, brooding stare and shifting mood just makes him look like an overly dramatic soap opera actor. Even with Johnson’s superb acting, Dornan is going to need to do more than just look like Christian (which was spot on).

The film’s soundtrack was close to perfect, with Frank Sinatra and The Rolling Stones in the mix. However, Taylor-Johnson is determined to leave no scene without some instrumental song playing in the background, similar to elevator music. Her attempt to amplify Johnson’s character’s wittiness with comical piano music playing the background downgraded what was supposed to be highly sexual tension scenes of flirty banter between Christian and Anastasia, to comedy. Let’s put it this way: for what is supposed to be a sexy film, the audience spent a lot time giggling.

While the film is flawed in almost every aspect, the ending was a magnificent cliffhanger, leaving audiences wondering about Anastasia’s and Christian’s future.

The film could’ve used another half hour to squeeze in the appropriate amount of sexual tension buildup for their first coupling. While Taylor-Johnson and writer Kelly Marcel had to work double time to make an awful book into a watchable movie, they downplayed the raunchiness too much.

Its sequel “Fifty Shades Darker” will hit theaters in 2016.