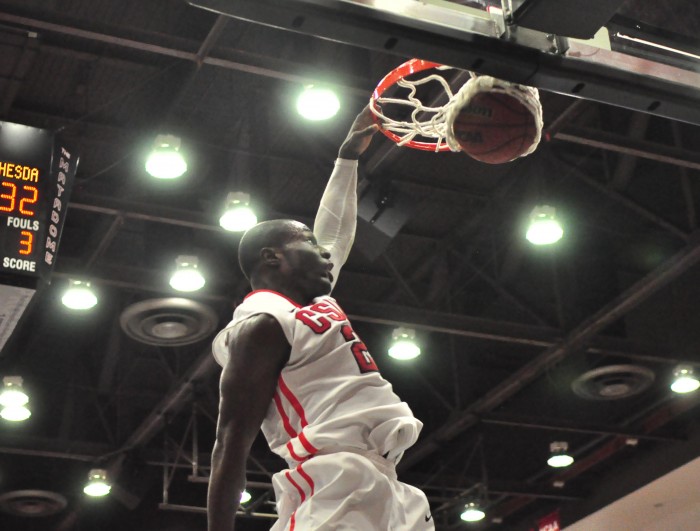 After a team loses eight straight games, a win against anybody is welcome, even if it comes against a team that plays in the National Christian College Athletic Association (NCCAA).

“Coming off what we’ve been going through this whole season, I feel like this was a really good game for us to kind of get back on the right track,” senior guard Robert Cid said.

Bethesda, a school with an enrollment of only 228, never really stood a chance, as the Matadors were able to overpower the Flames on defense, beating them to spots and sending their shots back with ease.

The score reflected the discrepancy in talent and physicality, as CSUN led 16-3 less than five minutes into the game.

Although the defense set the tone for the Matadors, it was their rebounding that was instrumental in building an insurmountable lead early.

However, the Matadors would take their foot off of the gas defensively, and the Flames went on 8-4 run, cutting the lead to 26-11.

But following a missed 3-pointer on the other end, Efferson sprinted passed four Bethesda defenders and found senior forward Stephan Hicks leaping above a defender for the one-handed dunk.

“I just seen [saw] him running up the right lane, and you know he he’s a high flyer, so I threw it up, kind of hoped he would go get it and he did,” said Efferson. “That was nice.”

After Hicks’s emphatic dunk, the Matadors returned to suffocating the Flames on defense and moving the ball with precision on offense.

“For the most part, when we had the ball, we were looking to get somebody else a shot,” Efferson said. “Usually the play is ran for a particular person, tonight it was get each other the ball.”

Despite of their defense and rebounding, Bethesda was able to go on an 11-1 run right before the half, trimming the lead to 15 with 10 seconds to go. Moments before the first half buzzer, however, senior forward Stephen Maxwell was able to tip the ball in, to reclaim some momentum for CSUN heading into the break.

As soon as the second half began, the Matadors continued to hound the Flames defensively, en route to a 63-35 lead with 14:25 remaining in the half.

And as the half progressed, the Matadors began to muscle it inside. They shot nine free throws in the first 10 minutes of the half, after shooting only eight the whole first half.

In addition to establishing their dominance in the paint and at the free throw line, the Matadors’ guards were able to operate on the perimeter with ease. Although most of their perimeter players stepped up in the second half, it was the seldom-used Cid who stole the show.

Cid established a rhythm when he got the ball under the basket and scored with a nifty up-and-under layup in traffic. Immediately after the ball went through the basket, the crowd erupted to celebrate Cid’s first made basket as a Matador.

“It gets me hyped, it gets me so energized,” Cid said, in reference to the crowd’s support. “It makes me hungry for more.”

A couple possessions later, Cid would get more as Efferson was able to find Cid on a secondary break for a 3-pointer in the right corner. And as that shot swished through the net, frenzied cheers of his Cid’s name and collective “yeahs!” filled the Matadome.

“I’ve been waiting for that 3, so I finally got it,” Cid said with a smile. “So it felt real good and I heard the crowd going.”

Approximately a minute later, Bethesda called a timeout, and on his way to the huddle, Cid was swarmed by his teammates congratulating and hugging him.

The pair of shots Cid made gave the Matadors enough of an emotional boost to finish the game strong and cruise to a victory.

Even though this was an encouraging win for the Matadors moving forward, it still does nothing for them in the Big West standings, where they are clinging onto the last spot in the Big West tournament.

“I feel like going forward with these last four games we have left, we can get a little momentum going into the conference tournament and hopefully surprise some people,” Cid said.

The Matadors will look to secure a tournament spot in their last four conference games, beginning with a road date on Saturday with a UC Irvine Anteaters team that mauled the Matadors 80-49 in the Matadome a little less than a month ago.