Studying the mythology of mankind 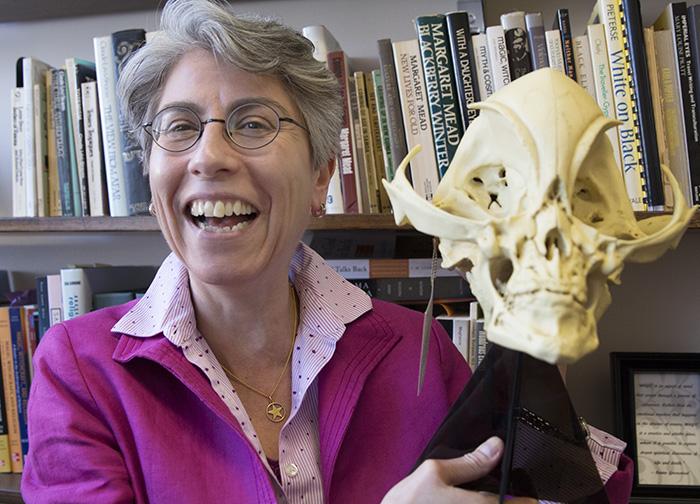 Growing up she planned to go to medical school, until a college anthropology course opened her eyes to a new language about the cultural disjunction she felt growing up.

“I’m all about getting folklore out into people’s attention. I think people are interested in folklore, but they often don’t realize there’s an academic study,” Magliocco said. “A lot of my educational mission extends to getting the discipline of folklore out there and making it accessible to people. So, people get excited.”

She was first contacted by the producer of TV show called “That’s Incredible” and was asked to talk about humans quest for immortality.

“He wanted me to talk on camera about folklore and immortality–like the fountain of youth or the philosopher’s stone, which was supposed to grant immortality,” she said. “So I thought ‘okay cool, I’m a folklorist, this is what it’s all about.’”

Magliocco, a former documentary producer, thought it would be fun to sit behind the camera and give commentary. The episode was filmed in a graveyard, and she would suggest camera shots.

The producer called Magliocco about another show he was filming on the History Channel, and that’s how she got started on “Ancient Aliens.” After a premiere in 2010, the show has grown steadily, kicking off with seven seasons.

“Ancient Aliens” uses researchers and UFO enthusiasts to explore the possibility that aliens helped shape Earth. The show also suggests aliens have made contact with humans. Her commentary is used in sixteen episodes.

One of her students, Rachel Dunn, 21, said that Magliocco’s engaging personality is perfect for TV.

“I think she’s an interesting person. Now I want to watch ‘Ancient Aliens’ because she is on it,” the English major said.

Magliocco said her counter arguments on the belief that aliens influenced mankind were twisted on the show.

“They’ll just present me with a list of 20 questions, some about the Lost Time experience and some about Irish folklore. You name it. It’s like a grab bag,” she said.

According to an UFO Research Network website, the Lost Time experience is connected with possible signs of alien abduction. It is a period of time that a person can’t recall what happen to them or their actions.

She said the producers take her answers and splice them between unbelievable and crazy theories.

“They always makes it sound like I’m supporting the existence of aliens,” she said. “The universe is vast and there are many Earth-like planets out there, that I think there’s a good probability that life exists on other planets.”

However, she doesn’t believe aliens have visited Earth, and doesn’t support the theory aliens are responsible for human development.

“This is something that I have told them on camera a million times but they never put it in,” she said. “I am completely opposed to the show’s theory. As an anthropologist, it’s important to understand that our ancestors were as smart as we are today. There are all kinds of symbolic explanations for pictures and representations that don’t have to involve aliens.”

“When I find a producer that I like to work with, I will consider doing more television,” she said.

Originally from Italy, she moved to the U.S. and spent time in the Eastern United States. While in school, she worked as a wildlife rehabilitator and taught inner city kids about nature.

“I have raised several baby animals to adulthood and released them into the wild,” she said. “I loved that job. I started getting experience feeding babies and caring for them in different ways.”

Magliocco holds a Doctor of Philosophy from Indiana University. Her first major research was in Sardinia, Italy. She studied how globalization affects traditional religious festivals. Her next fieldwork studied rituals and cultural politics among witches and pagans in the United States. She has four published books.

She said it was difficult to find a permanent job after college, and was happy there was an opening at CSUN. This is Magliocco’s eighteenth year on campus. She said it has grown tremendously.

“When I came it was not too long after the earthquake. There was still temporary building on campus,” she said. “Physically, the campus was very different than the layout today.”

Her office in Sierra Hall is filled with rows of journals, anthropology, religion, supernatural, folklore and methodology books. One shelf has a fake skull of a Grey alien with big eyes and a picture of her father and American cultural anthropologist, Margaret Meed.

“She was a very well-known… and she was a friend of my family,” Magliocco said. “She and my father met in the 1950s and early 60’s, when psychology and anthropology had a lot more contact as disciplines. They became friends and she would visit us every year.”

When she isn’t teaching, she enjoys listening to music, hiking, cooking and spending summers on the Central Coast of Southern California. She also occasionally plays the guitar and banjo.

Christina Campbell, associate professor of Anthropology, said Magliocco has helped the department grow. She has worked with Magliocco since 2008 and said she is enthusiastic about the field.

“She has great stories to tell. Being a folklorist, she will often interpret things that we say or will be interested in things from a different perspective,” Campbell said. “She’s a constant source of support for younger faculty members especially, and active in the department.”